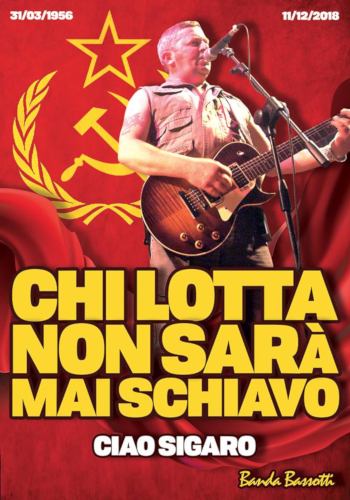 Angelo Conti, known as Sigaro, died Dec. 11 in Rome, following a brief illness. A worker, musician and communist, Conti was a founding member of the world-renowned punk band Banda Bassotti.

Hundreds of friends, comrades and admirers turned out to the Egyptian Temple cemetery in Rome for Sigaro’s funeral on Dec. 13. They chanted, sang, carried banners and raised their fists — it was a political demonstration.

The city walls of Rome and the social media walls of thousands of people around the world were plastered with posters reading: “Those who struggle will never be slaves. Ciao (farewell) Sigaro.”

What was the cause of this incredible international outpouring on behalf of a 62-year-old Italian shipyard worker?

Banda Bassotti is little known in the U.S. thanks to the historic legacy of Cold War anti-communism in the punk music scene. But in the rest of the world, the group is loved and admired — both for its music and more than 30 years of carrying out international solidarity with some of the most oppressed and exploited workers of the world.

The workers who founded Banda Bassotti — Angelo Conti, Gianpolo “Picchio” Picchiami and David Cacchione — met in the shipyards of Rome in 1984. They started out using their construction skills to build stages for demonstrations and concerts by radical bands in the Ska-Punk-Oi scene. Others joined with them. And they embraced an internationalist perspective — organizing a solidarity work brigade to Nicaragua to help build a school during the U.S.-Contra war.

In 1987, inspired by groups like The Clash, they were first coaxed into performing on stage themselves. Along with their own powerful songs, Banda Bassotti is known for its renditions of anti-fascist classics like “Bella Ciao” and Soviet revolutionary songs, which often turn into thundering singalongs.

Since then, from Palestine and Turkey to El Salvador and Mexico, and most recently in the annual Antifascist Caravans to the Donbass republics of Donetsk and Lugansk, Banda Bassotti has continued to unite the left in campaigns of political solidarity, inspiring concerts and material aid, helping to raise revolutionary internationalist consciousness along the way.

In fact, just days before Sigaro’s death, members of Banda Bassotti were in Chile, where they gave a concert. While there, they visited the Casa Bolívar to stand with the Mapuche Indigenous community and bring aid to local children, and held a meeting and rally with local communists in solidarity with Donbass.

Like their peers and comrades in the Turkish band Grup Yorum, they have set the standard which communist, anti-fascist and anti-imperialist artists around the world aspire to.

And so, in cities and towns across Italy, as well as in the Basque Country, Santiago de Chile and many places in between, groups of activists, musicians and supporters of radical sports teams came out into public squares to light flares and hold banners reading “Ciao Sigaro” and other slogans.

The outpouring of grief and solidarity extended to women’s and men’s basketball and football teams in Buenos Aires, Argentina, who held a minute of silence during an exhibition. Soccer players in the Donetsk People’s Republic also showed their solidarity, holding signs honoring Sigaro before a match.

Sigaro and Banda Bassotti’s tremendous unifying influence on the radical left in Europe and beyond was demonstrated by the immediate outpouring of solidarity messages from radical groups around the world. Messages came in from groups including Fronte Popolare, Partito Comunista, Patria Socialista and Communist Refoundation in Italy; the Anti-Imperialist Front in Turkey; the Communist Party of the Donetsk People’s Republic; the German Communist Party (DKP); and the Communist Party (Proletarian Action) of Chile; and many more.

In a statement published Dec. 14, Banda Bassotti reported: “One of the last messages Angelo had sent to us was ‘FORWARD UNITED,’ written in capital letters. A terrible legacy in a country where splitting is the rule, where ‘united’ is a beautiful word but nobody can put it into practice.

“With Banda Bassotti we can talk a little to all those who are part of our world. We willingly leave the thousand differences to others. Once Picchio said a historical truth for us: the communists have rarely joined together. One of those times was the October Revolution.”

“Our songs tell the reality that we live and we try to sing together with the world we are part of,” Sigaro said in an interview a few years before his death. “We are still working on the construction site, we are still exploited, we are a group of communist workers who are trying to fight hypocrisy and injustice. We are old, it’s true, but our spirit remains young.” (Republica, Dec. 12)