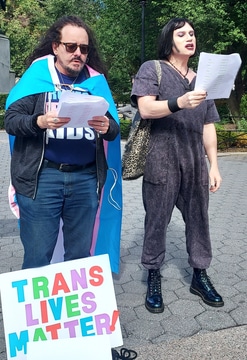 Trans activists, community members, and allies rallied at New York’s Union Square Park Oct. 8 for the National Day of Action to End Violence and Genocide on Transgender People. The event was rescheduled from Oct. 1 because of bad weather.

On a warm, sunny autumn afternoon, people held signs with slogans like “Protect trans kids,” “Trans liberation,” “Trans rights = human rights,” and “Nazis and TERFS say get back, we say fight back!” Passersby stopped to listen to the speakers and ask questions.

Rally organizers Mia and Lenny Zenith read out the names and brief, moving descriptions of the 31 known trans and gender nonconforming people killed so far in 2022 – most of them people of color. They reminded the crowd that many hate crimes and killings of trans people go unacknowledged because of misgendering by police and the media.

Melinda Butterfield of Women In Struggle and the Socialist Unity Party read her “Open letter to LGBTQ+ activists” about the significance of Cuba’s revolutionary Code of Families and its lessons for people fighting for equality in the U.S.

Both presentations spurred lively discussions about anti-trans violence, the attacks on gender-affirming health care, Cuba’s advances for queer people, and the U.S. proxy war in Ukraine.

Organizers are planning an action to mark Trans Day of Remembrance on Nov. 20.

The National Day of Action was initiated by the Trans Radical Activist Network. Events were held Oct. 1 in about 20 cities, including Los Angeles, Richmond, Virginia, Houston, Seattle, Springfield, Illinois, and San Diego.

Supporters of the Socialist Unity Party and Workers World Party were among the participants in the New York event.