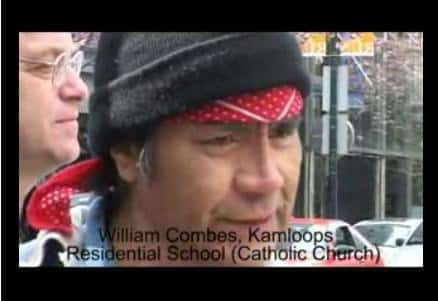 Update: William Combes died of lethal injection at St. Paul’s Catholic hospital in Vancouver on February 26, 2011. Genocide survivor, an eyewitness of killings and of the abduction of ten aboriginal children by the Queen of England and Prince Phillip on October 10, 1964, at the Kamloops Catholic residential school.

VANCOUVER, Canada — The aboriginal man who claimed to witness the abduction of ten fellow residential school children by the Queen of England and her husband in October 1964 at the Catholic school in Kamloops, B.C. has died suddenly at the Catholic-run St. Paul’s Hospital in Vancouver.

William Combes, age 59 and in good health, was scheduled to be a primary witness at the opening session of the International Tribunal into Crimes of Church and State (ITCCS) on September 12 in London, England. I last saw William ten days ago, on the eve of my departure for a European speaking tour, and he looked better than I had seen him in years.

According to his partner Mae, William was in stable health and was assigned a new doctor at St. Paul’s Hospital this past week. William was then committed to the hospital for “tests”, and his health began to immediately deteriorate. He died suddenly yesterday of a still-undisclosed cause.

The Vancouver Coroner’s Office refuses to comment on William’s death. William was the sole survivor of a group of three aboriginal boys who claim to have witnessed the abduction of ten children during a royal visit to the Kamloops residential school in mid-October 1964 when both the Queen and Prince Philip were in Canada.

“They took away those ten kids and nobody ever saw them again” described William, in several public statements made over the airwaves of my former Vancouver Co-op radio program, and in the following signed and witnessed declaration made on February 3, 2010:

“I am an Interior Salish spirit dancer and am 58 years old. I live in Vancouver, Canada. I am a survivor of the Kamloops and Mission Indian residential schools, both run by the Roman Catholic church. I suffered terrible tortures there at the hands, especially of Brother Murphy, who killed at least two children.

“I witnessed him throw a child off a three-story balcony to her death. He put me on a rack and broke some of my bones, in the Kamloops school basement, after I tried running away. I also saw him and another priest burying a child in the school orchard one night.

“In October 1964 when I was 12 years old, I was an inmate at the Kamloops school and we were visited by the Queen of England and Prince Phillip. I remember it was strange because they came by themselves, no big fanfare or nothing. But I recognized them and the school principal told us it was the Queen and we all got given new clothes and good food for the first time in months the day before she arrived.

“The day the Queen got to the school, I was part of a group of kids that went on a picnic with her and her husband and some of the priests, down to a meadow near Dead Man’s Creek. I remember it was weird because we all had to bend down and kiss her foot, a white laced boot.

“After a while, I saw the Queen leave the picnic with ten children from the school, and those kids never returned. We never heard anything more about them and never met them again even when we were older. They were all from around there but they all vanished.

“The group that disappeared was seven boys and three girls, in age from six to fourteen years old. They were all from the smart group in class. Two of the boys were brothers and they were Metis from Quesnel. Their last name was Arnuse or Arnold.

“I don’t remember the others, just an occasional first name like Cecilia and there was an Edward. What happened was also witnessed by my friend George Adolph, who was 11 years old at the time and a student there too. But he’s dead now,” Combes said.
—

I believe that William Combes died of foul play and that his murder was arranged by those who stood to lose from his speaking out about his witnessing of the child abductions and other crimes of murder and torture at Catholic Indian residential schools.

I am writing a soon-to-be-issued eulogy for my friend and fellow fighter, William Arnold Combes. Like another murdered front-line Native activist, Johnny Bingo Dawson, who was killed by the Vancouver police in 2009, William will never be forgotten – and those who killed him will, like the system that caused the death of so many children, be brought to real justice.

His murderers have not won. William’s videotaped statements, including his witness of the 1964 abductions, have been registered in the archives of our ITCCS, and will be made public at our opening session on September 12, 2011. I will be proposing to the ITCCS executive that William Combes and Johnny Dawson both be named post-humous Honorary Elders of the Tribunal. In his name and memory, and for all the children.

See the evidence of Genocide in Canada at www.hiddennolonger.com and on the website of The International Tribunal into Crimes of Church and State at www.itccs.org . Watch Kevin’s award-winning documentary film UNREPENTANT on his website www.hiddenfromhistory.org