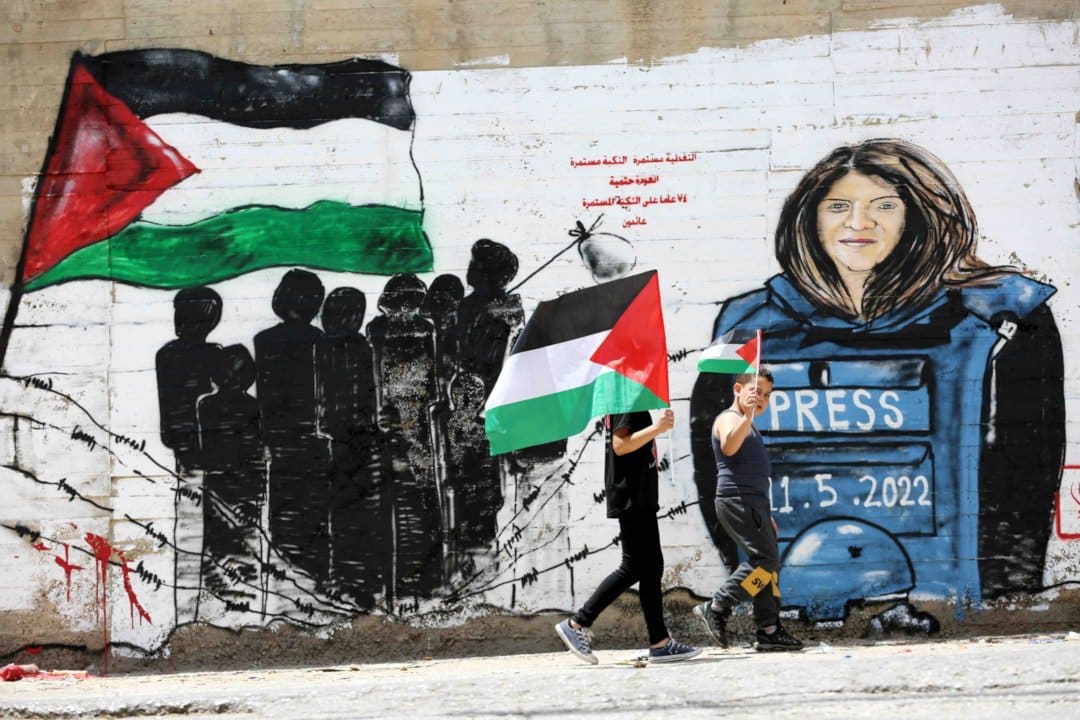 The IDF followed its murder of Abu Akleh with an attack on her funeral procession. Her procession included Muslims, Christians and Jews. Abu Akleh herself was a Christian. The Israeli forces beat pallbearers and other attendees.

Until recently, the Israeli government denied any culpability in Abu Akleh’s death. However, on Sept. 5, 2022, the IDF released a statement admitting a “high possibility that Ms. Abu Akleh was accidentally hit by IDF gunfire fired towards suspects identified as armed Palestinian gunmen.”

Eyewitnesses reported that Israeli troops appeared to be firing directly at journalists. The IDF indicated that the stormtroopers responsible for Abu Akleh’s death would face no criminal charges or prosecutions.

Translated: “We launched an attack on Palestinian refugees and murdered a prolific Palestinian journlaist because that is what Zionists do.”

Blood of Palestine on hands of U.S. defense industry

As Abu-Akleh was an American citizen, her family requested a meeting with U.S. President Joe Biden during his July visit to Israel. The family simply wanted to express their concerns and demands for justice directly. Biden refused the meeting, instead inviting Abu Akleh’s family to visit Washington, D.C.

The U.S. has provided Israel with $63 billion in military aid and security assistance since 2001. $8 billion of this aid came in 2021 and 2022. The planes that terrorize Gaza City are from the U.S. The semi-automatic rifles that murder Palestinian teenagers are from the U.S. The entire military infrastructure of Israel is provided by the United States of America, which is why Biden’s refusal to meet with Abu Akleh’s family is so cold and detestable.

The U.S. defense industry’s hands are covered in Palestinian blood. Israel enforces apartheid while Northrup Grumman, Lockheed Martin and Raytheon make billions in profits. The least the President could do is meet with the family of the slain Palestinian-American journalist.

Unfortunately, the IDF raid on the Jenin refugee camp in the West Bank that killed Shireen Abu-Akleh was not an isolated incident. The raid is part of a broader swath of Israeli offensives against Palestinian communities in Gaza and the West Bank. Syria has also felt the wrath of this offensive.

On Sept. 5, 2022, the IDF launched another attack on Jenin with artillery and ground forces. Sixteen Palestinians were injured, and one was martyred. The Palestinian person killed was a 29-year-old man attempting to capture the vicious Israeli attack on the social media site TikTok. The IDF claimed that the operation in Jenin was aimed at demolishing the home of an alleged “terrorist.” Indeed, the IDF regularly demolishes the homes of Palestinians they label as “terror suspects” as punishment for their families.

This attack, much like the one that killed Abu Akleh, also included IDF forces firing at journalists and other individuals trying to capture the raid on video. The U.S. accuses countries like Cuba and China of violating freedom of the press while materially supporting an apartheid regime that targets journalists with impunity. No U.S. journalist has ever been shot and killed while reporting by military forces in Cuba or China.

The global anti-Zionist community must unite in solidarity with Shireen Abu-Akleh, the Palestinian people, and all those who would attempt to uncover the truth about Zionist apartheid.

Down with Israeli apartheid! Free Gaza! Israeli settlers out of the West Bank!