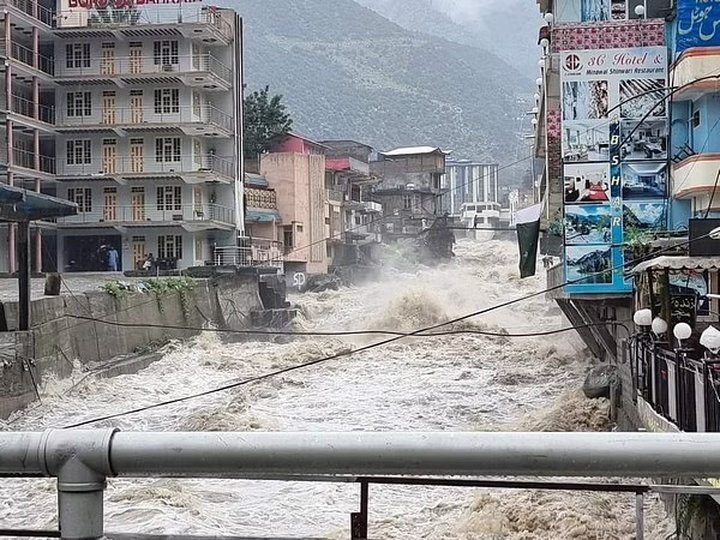 The year 2022 has seen so much devastation from climate change. Deadly heat waves plowed through all-time temperature records in Europe, the U.S., and South Asia.

East Africa is enduring its most prolonged drought in many decades, and 20 million people are at risk of severe hunger. The death toll from all of this is elusive, but when estimates are possible, it will certainly be in the hundreds of thousands.

Capitalist-fueled climate change is a war on the planet and all its inhabitants.

With all that, what is happening in Pakistan stands out. A monsoon season nearly double compared to “normal,” compounded by the rapid melting of glacial ice, has unleashed floods that have a third of this poverty-stricken nation under water.

More than 1,150 people have died since the middle of June when the rains began, and 33 million others are affected. Millions of people have fled their damaged or destroyed homes, and search and rescue operations are finding more victims daily. More rain is on its way. Language describing the situation includes “epochal level,” and “nothing left.”

U.N. Secretary-General Antonio Guterres made an emergency appeal for a $160-million relief fund. He warned of the perils of capitalist-caused climate change in his video to a ceremony launching the fund. Guterres said, “Let’s stop sleepwalking toward the destruction of our planet by climate change. Today, it’s Pakistan. Tomorrow, it could be your country.”

Guterres’ remarks could easily be seen as a veiled criticism of the dismal U.S. response to climate change. For more than a century, while emitting the most significant volume of greenhouse gases, the capital created by labor throughout the world flowed into the coffers of imperialist corporations and banks. Being the preeminent imperialist country, the U.S. is considered the most well-equipped and, simultaneously, the most obligated to battle climate change. But for decades, U.S. energy companies, banks, and the entirety of corporate U.S. have blocked and sabotaged actions to curb emissions.

A 2019 IMF “bailout” of Pakistan’s economy imposed austerity measures as is typical. When exploitative imperialist corporations bleed a country dry, the IMF swoops in and demands that the government lower wages, cut social services and push living standards down in exchange for funds to “rescue” the spiraling economy. After a long delay, they finally released a scheduled payment of $1.17 billion during the devastating flooding.

The government of Pakistan estimates that the recovery from the floods will cost $10 billion. However, if the U.N. appeal for $160 million comes to fruition, combined with the long-delayed IMF payment, that will provide less than 12% of the estimated needs.

Since 1994 the U.N. has organized annual conferences on climate change called Conference of the Parties (COP.) In 2009 at COP15 in Copenhagen, wealthy capitalist countries were forced into an agreement to provide $100 billion annually to the Global South by 2020. The funds are meant to finance mitigation and adaptation in those countries that are not the cause of climate change but have been so exploited by imperialist policies that they are the least able to recover from the consequences of an overheated global atmosphere.

So far, not one penny of the funds promised in 2009 has been paid. Because of the explosion of climate-change-related, devastating crises around the world in the last few years, the lack of payment is anticipated to be a huge issue at the November COP27 in Sharm el Sheikh, Egypt.

Climate scientists have shown that because of rising ocean temperatures due to greenhouse gas emissions, rainstorms, tropical storms, and hurricanes lose their strength and move along more slowly than before capitalist industrialization. Rainstorms hang around for days dumping water on land. Urban areas with concentrations of tall buildings slow the storms down even more. This phenomenon has been especially apparent in the last 50 years and was expressed most clearly when Hurricane Katrina devastated New Orleans. Katrina also showed the world that racism and national oppression compound the problems of climate change. The experience of nations of oppressed people within the borders of the U.S. in many ways mirrors that imposed on people in the Global South.

Hoping for a solution from a capitalist government is like appointing the fox to guard the henhouse.

Writing this week in the journal Nature Climate Change, a group of scientists has called on their colleagues for activism. April saw protests by more than a thousand scientists from 25 countries. In the UK, scientists were arrested for gluing their scientific papers — and their hands — to the Department for Business building.

The fight against climate change must be taken from the hands of the corporate class and their government. A militant mass movement in solidarity with the most impoverished and oppressed throughout the world will surely grow.