The U.S. military and its counterparts in South Korea are wrapping up a week-long rehearsal for an invasion of North Korea and the assassination of North Korean President Kim Jong Un. The Ulchi Freedom Shield exercises, as they are called, are a major escalation of the already provocative “war games” that the U.S. uses to threaten the socialist republic to the north.

The name Ulchi is borrowed from the sixth-century Korean general who is said to have defeated China in battle. Given the “New Cold War,” in which U.S. rhetoric against China has escalated along with the presence of U.S. warships near China’s coast, the name can hardly be lost on anyone.

The election of South Korean President Yoon Suk-Yeol signaled an escalation of U.S. and South Korean threats against North Korea. Yoon pledged increased military spending, new technology, and more cooperation with the Pentagon. The heightened hostility toward North Korea is a turn from the previous administration of President Moon Jae-In, who attempted to build a rapprochement with the leadership of the North independently of the U.S. 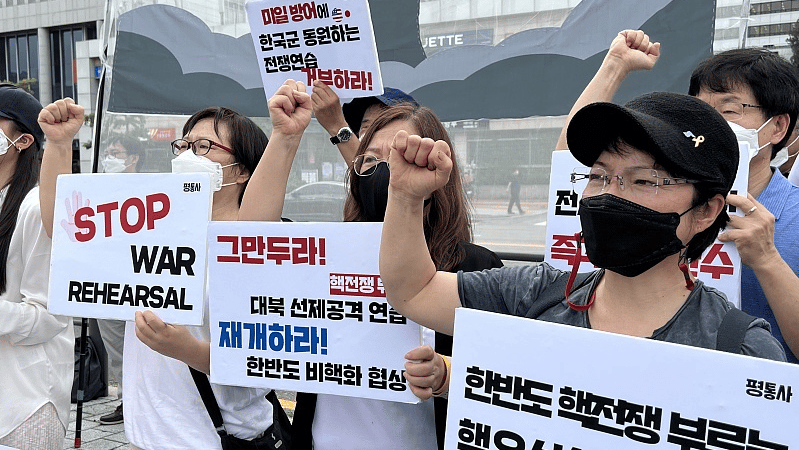 Ulchi Freedom Shield is among the largest military exercises in recent history. It goes beyond the scope of recent years’ war games – considered Command Post Exercises that involve simulations without live fire. Ulchi Freedom Shield is comprised of what are called Field Training Exercises, which involve significant mobilizations and live fire instead of simulations. The exact number of troops taking part isn’t yet available, but the last time similar exercises were held five years ago, some 50,000 South Korean troops and nearly 20,000 U.S. troops took part.

This particular exercise is also called “Kill Chain” by Pentagon planners and is broken into three phases. The first involves reconnaissance after infiltrating North Korea to find and strike weapons and bases. The second is called “Korea Massive Punishment and Retaliation,” which involves massive destruction by land, sea, and air after rendering North Korea defenseless. Finally, the third phase is to find and execute the North Korean leadership — particularly President Kim Jong Un.

Under the leadership of its founder, President Kim il Sung, North Korea survived the brutal 1950-1953 Korean War. The U.S Air Force had carpet bombed in the first few months beginning in June and destroyed every city. The rest of the three-year war was a land war. The North Korean people forced the imperialist invaders south to Pusan at the bottom of the peninsula. The imperialists then launched a second invasion at Inchon on the West Coast but were finally driven out by North Korean soldiers, now joined by 1 million allied Chinese volunteers. Ultimately, 3 million or more North Korean people lost their lives.

The Korean nation was arbitrarily divided by the U.S. in 1945 and remains divided at the 38th parallel today. The U.S. has refused to sign a peace treaty for all these decades. As a result, the war is still on, and it’s more than a technicality. U.S. guns have been aimed at North Korea ever since, and punishing U.S. economic sanctions that are among the most severe in the world are in place to try to starve North Korea into giving up its socialist agenda.

Yet, under seemingly impossible conditions, the DPRK has rebuilt its cities and, through its “military first” policy, has been able to survive against the U.S. threat of nuclear annihilation.

The U.S. media paints a picture of two halves of the Korean nation hostile to each other and the U.S. in a position of having to defend the south from potential North Korea attacks. Actually, U.S. forces occupied South Korea when the Japanese imperialist empire collapsed at the close of World War II. The people of South Korea, just like Koreans in the north, had fought against the brutal occupation by Japan since 1910. They had sacrificed and longed for self-determination. Soon it became clear that the U.S. agenda was to take Japan’s place as colonizer.

The people of the south had been ready to build a progressive society. They had no quarrel with the people of the north. There were no differences between them in their 5,000-year-old civilization. They all spoke the same language and shared the same history and customs.

People of the south rebelled

The people of the south rebelled. Their struggle against the new U.S. occupiers was militant and continuous. Their movement was powerful and was met with U.S. brutality. The U.S. occupation government even called on the former Japanese colonizer’s military at times to help put down rebellions.

The people of South Korea don’t share President Yoon’s vision of a U.S./South Korea block to destroy North Korea. On the contrary, the permanent presence of U.S. troops and weapons is hated.

This is a fact that the U.S. media works hard to conceal. Not one major U.S. publication mentioned that on August 14, tens of thousands of South Korean people demonstrated in the streets of Seoul against the U.S. military presence and plans for the Ulchi Freedom Shield exercises. The demonstration was called by the Korean Confederation of Trade Unions, South Korea’s second-largest labor confederation.

Anti-war and anti-imperialist organizations in the U.S. and worldwide should extend full solidarity with the people of North and South Korea. Korea is one!