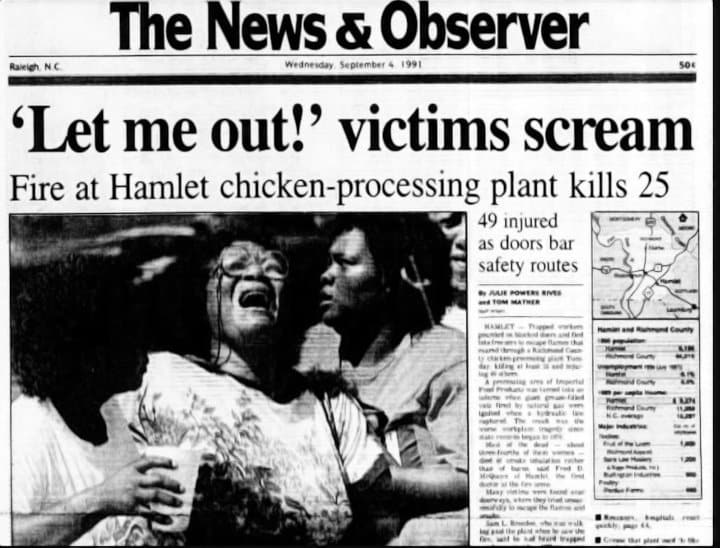 Twenty-five workers were killed on Sept. 3, 1991, when a fire broke out at the Imperial Foods chicken plant in Hamlet, N.C. Workers choked to death from heavy black smoke after a deep-fat fryer ignited. Eighteen of the dead were women.

Another 54 workers were injured. Forty-nine children were orphaned.

Disability benefits for survivors were pitiful. The payments were just two-thirds of their average pay, which was around $5 per hour.

None of the workers had to die. The processing plant had neither an operating sprinkler system nor an evacuation plan.

Bodies were found next to doors with footprints from workers trying to escape. The doors were ordered locked by the plant’s owner, Emmett J. Rowe.

The chicken nugget capitalist did so because he thought workers, many of whom were Black, would steal chickens. White and Black workers died together because of Rowe’s racism.

In its 11 years of operation, the plant never had a safety inspection. Rowe didn’t even register the plant with the state.

Even if he had, the workers might not have seen an inspector. Like half the states, North Carolina is allowed by the Occupational Safety and Health Administration to run its own inspection program. North Carolina has 10.5 million people but less than a hundred safety inspectors.

OSHA isn’t any better staffed. It currently has just 1,850 inspectors in the United States. That’s one inspector for every 82,513 employed workers.

Defunding trigger-happy, club-swinging, chokehold-using police is denounced by both Trump and Biden. OSHA has been defunded since the day it was established 50 years ago.

Yet dead chickens at the Hamlet plant were inspected every day by the U.S. Department of Agriculture. One USDA inspector even approved locking a door — a violation of federal and state laws — to supposedly keep out flies.

Nobody wants filthy food, but shouldn’t human lives be given as much consideration as chicken parts? Despite a 1994 agreement to report dangerous conditions to OSHA , there’s no record that the USDA has ever done so, according to “The Assembly” digital magazine.

It was only because of a community mobilization that Rowe was given any jail time at all. Playing key roles were the Black Workers for Justice in North Carolina and Brenda Stokely, former president of AFSCME Local 1707 in New York City.

Serial murderer Rowe was sentenced to 19 years, 11 months in prison. He served almost four years. That’s less than two months for every worker he murdered.

Compare that to Alvin Kinnard’s sentence. Before being released in 2019, the Black man spent nearly 36 years in Alabama prisons for allegedly robbing $50 from a bakery.

Emmett Rowe began his criminal career up North. He opened Imperial Foods in Moosic, Pa. — near Scranton — in 1973.

The plant had two fires, injuring several workers, including one critically. It was sued for polluting water.

Just as northern textile mills went south in the 1920s so the companies could pay lower wages, so did Emmett Rowe.

Besides his Hamlet factory, Rowe bought the Haverpride Foods plant in Tarrant, Ala., in 1988. He closed it in 1990 without giving the employees 60 days notice, as required by federal law.

More than $250,000 in severance pay was ordered to be paid to 115 workers by a federal judge. Rowe never paid a penny.

Rowe’s co-conspirators in these crimes were the fast-food outfits that bought his chicken fillets and nuggets. They rip off millions of workers, and not just at their drive-throughs.

Wendy’s CEO Todd Penegor is pulling in $7,213,774 this year. Meanwhile the farmworkers who pick the tomatoes for Wendy’s hamburgers are ill-treated and miserably paid.

Hamlet was an important junction on the old Seaboard Air Line railroad, now part of the CSX system. (The term “air line” referred to the railroad’s claim of a straight route.) Two Amtrak trains a day stop there.

Trains coming south from Virginia could go to four different directions from Seaboard’s Hamlet hub. These included lines to Florida, Alabama and Georgia.

The line to Atlanta and Birmingham went through Monroe, N.C., where Mabel and Robert Williams organized armed self-defense against the Ku Klux Klan. They faced phony kidnapping charges but were able to escape to the socialist countries of Cuba and the People’s Republic of China.

Last year hundreds of workers tested positive for the coronavirus at Tyson’s poultry plant in Monroe. At least one worker died of it.

The company forced workers to come in even if they were sick. Tyson’s management should be put in jail, too.

Hamlet still has a large railroad yard. Why didn’t some of the workers at Emmett Rowe’s deathtrap try to get a job there?

While railroads are more profitable than ever, the number of railroad workers has shrunk from 1.5 million in 1947 to around 143,000 today. That’s over 1.3 million jobs destroyed — a 90 percent drop.

What made these job cuts more heartbreaking was that Black and women workers were finally being hired in many railroad jobs.

Instead of union railroad jobs, International Tie Disposal wants to build a plant next to CSX’s Hamlet yard to dispose of old railroad ties. The facility will emit harmful air emissions near a poor community. That’s called toxic racism.

Never forget the workers in Hamlet who died because of greed. Capitalism kills.