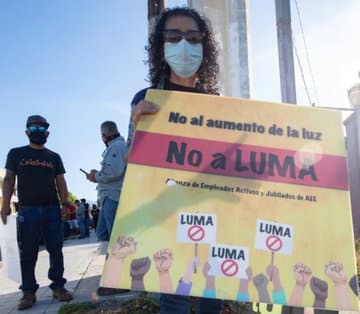 While the dictatorship of the Fiscal Control Board (“la Junta”) imposed by the U.S. Congress and its lackeys in the local government do everything to destroy Puerto Rico as a nation and sink us into poverty and despair, the people continue to organize and fight on many fronts.

It is already clear that the administration of Governor Pedro Pierluisi will not favor the people at all. Both he and his sister Caridad, whom he took to reside in La Fortaleza to help him govern without being elected by the people, have as a priority to privatize any publicly-owned agency that remains.

But in their arrogance, they do not count on the fact that the people are already tired of the abuse due to poor health services, energy, education, housing, public safety, etc., in addition to the terrible increase in the cost of living and basic food items.

There are struggles everywhere, including entire communities against telecommunications antennas, against construction in land-based maritime zones, for the defense of education, by trade unions. But now the most urgent is the fight against the terrible energy privatization company Luma because there is already a lot of indignation over the incessant blackouts across the country.

There are several demonstrations scheduled in the coming days against both Luma and the Fiscal Control Board.

The fight is uphill, but progress continues. Down with Luma and the dictatorship of the Junta and its government lackeys!

From Puerto Rico for RADIO CLARIN of Colombia, this is Berta Joubert-Ceci.