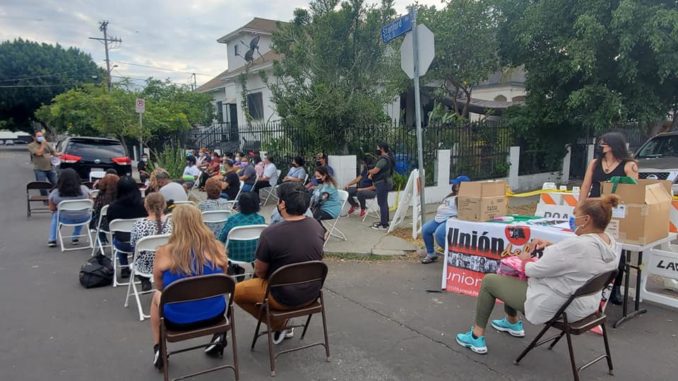 The families that were affected by the LAPD fireworks explosion are organizing themselves and they need your support! It has been six weeks since the blast and the city of LA has STILL not fixed their homes or given them the names of the LAPD officers who made the decision to detonate the explosives. They are having this protest to demand the following:

1) Fix our homes NOW!
2) Give us the names of the LAPD officers who gave the order to detonate the explosives in our neighborhood!
3) Immediate financial assistance for everyone who was affected!
4) We want full access to all hotel facilities at the hotel in Downtown LA where we are being housed temporarily. We don’t want to be treated like 2nd class citizens!
5) We want a written guarantee from the city of Los Angeles that the city will continue to pay for our housing until the city repairs our homes and it is safe for us to return.

The residents that were affected by the explosion will protest in front of City Hall and will then deliver a letter with these demands to Mayor Eric Garcetti. Union del Barrio and the Comites de Resistencia are assisting the community with this action.

BACKGROUND: On June 30th, the LAPD/Bomb Squad made the decision to endanger the lives of thousands of people when they detonated over 42 pounds of explosives on 27th Street in South Central LA. The explosion is linked to two deaths, dozens of injuries, psychological trauma and millions of dollars worth of damage to homes, cars and local businesses. Many residents have lost days of work and many were even fired due to missing days because of the explosion. Over 20 families had to be relocated because their homes were badly damaged. They are currently being housed by the city in a hotel in Downtown LA but they are being denied access to the swimming pool, gym and other facilities at the hotel.