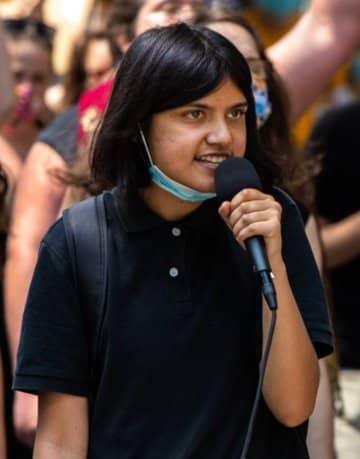 Speech by Peoples Power Assembly activist Lars at the March 7 Baltimore “Justice for George Floyd” rally, part of the National Alliance Against Racist and Political Repression day of action.

The trial of Minneapolis cop Derek Chauvin is set to begin tomorrow, many months after the death of George Floyd. This is the latest in a string of police-procured killings that have been witnessed by people all across the country. The time for the United States to reckon with its abhorrent history is long past due. The time to take action against a past and present of racism, hatred and white supremacy is today.

It is insisted, over and over again, that we live in an idealized America where the country can’t have a racism problem, because racism is supposedly long done with. Anything we see now is nothing more than the misgivings of a “couple of bad apples.” I know that’s a blatant lie and so do you.

This country was built on genocide and enslavement, and that foundation has never been uprooted. There can be no more excuses for this.

These so-called arguments never held any weight in the first place, and no one can justify why a man had to die, because that justification does not exist. There is no reason why George Floyd shouldn’t have left that store alive and the cops know it.

Bad apples are not a natural reality of a working system. They come from a broken system that spoils the whole bunch. This is not a one-and-done deal, and these killer cops must face what they’re due. Along with Derek Chauvin, militarized police and security forces across the country must be held accountable for the death of George Floyd!

The deaths of Black people cannot be allowed to be accepted as normal or brushed under the rug, and let no one tell you otherwise.