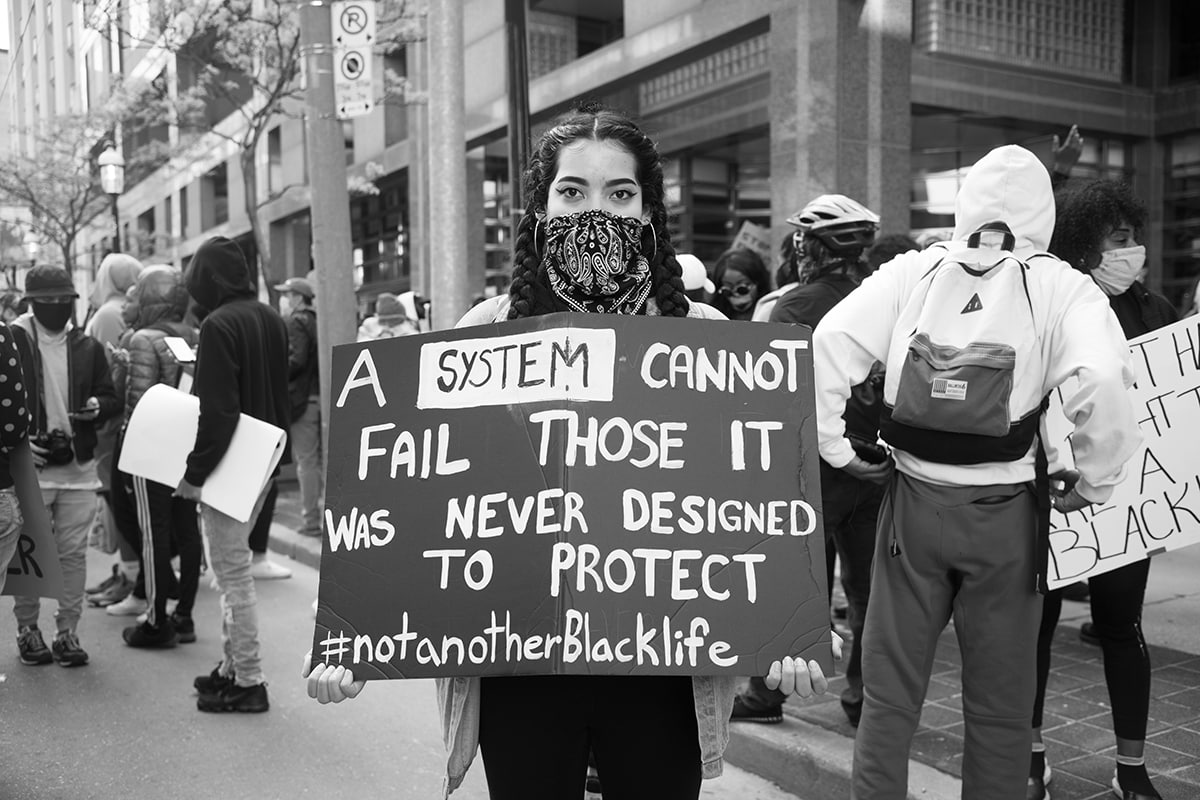 Oct. 28 — In the final days of campaigning before the 2020 elections, every form of media is saturated with advertising for the Democratic and Republican candidates in local, state and national elections.

The focus is mainly on the presidential campaigns. The far-right Trump campaign is openly racist and white supremacist, with Trump’s call-out to the neofascist Proud Boys to “stand by.” The campaign’s slogan is, in the words of the New York Post endorsement of Trump, “Make America Great Again, Again.”

In a news segment on NBC covering the Minneapolis uprising after the police murder of George Floyd, a protester responded so correctly to this slogan, opining: “America was never great.” Trump’s slogan is what might be called a “dog whistle,” that is, coded language to say, “Make America White Again.”

Joe Biden is running as “the nice guy” against Trump’s threatening authoritarianism. A senior Trump campaign adviser joked that watching Biden feels like “watching an episode of ‘Mister Rogers’ Neighborhood.’”

Trump and his campaign are so far right that the conservative, pro-business, pro-war politics of the Democratic candidate have been mostly obscured. Yet Biden is more conservative than Barack Obama; that’s why he was picked to be Obama’s vice president. Biden, who said in the first debate, “I am the Democratic Party,” is already moving the party further right at a time when Bernie Sanders’ “Medicare for All” was most popular in the Democratic primaries.

Biden is the anti-socialist, no matter what Trump says. Biden’s record in the Senate is closely tied to the racist Dixiecrats, and while he says he has moderated that somewhat, it’s this legacy that shapes the Biden Plan. (See the Jackson, Miss., Free Press, “Joe Biden and the Dixiecrats Who Helped His Career.”)

The U.S. electoral system is rigged so that only a Democrat or a Republican can be president. You have no other choice. In this election, the Republican is utterly repulsive to most, the Democrat not so much, but not popular, especially with the young generation.

Biden and the fascist danger

The progressives, socialists and communists calling for a vote for Biden claim that Trump represents fascism while Biden with all his flaws represents bourgeois democracy.

Would a Biden victory push back any fascist threat? The danger of fascism historically grows out of an economic collapse of capitalism. The capitalists have responded to the current crisis by laying off workers and driving down wages. Unemployment has reached Great Depression levels. The fascist dictators, Hitler, Mussolini and Franco, all came out of the Great Depression of the 1930s, when the working class was organized in major communist and socialist labor unions and parties and fighting for jobs, housing and food.

A Biden administration will not be able to reverse the long-run decay of U.S. capitalism, any more than Trump was able to do. Trump promised to reverse deindustrialization and bring back jobs in the basic industries of the past. But the past is past. There could be a short-term economic upswing, no matter who becomes president, as the current pandemic recession fades. No pandemic lasts forever. And this upswing in the economy may be temporarily boosted if the administration follows Roosevelt-era Keynesian economic stimulus policies. That’s the promise of the Green New Deal and MMT (Modern Monetary Theory).

However, a post-COVID economic upswing, even one boosted by MMT stimulation policies, is not the same thing as a major upswing of U.S. capitalism. It would not reverse the long-term general downturn of U.S. capitalism. A Biden administration that fails to reverse capitalism’s decline would set the stage for the return of an even more reactionary GOP. This is what happened in the 1980s. Out of the Jimmy Carter “stagflation” years rose the right-wing Reagan regime.

It is a vicious circle of the two-party capitalist system, where the only solution offered is to vote for a candidate that is seen as the “lesser evil.”

In Germany in 1932, workers were urged to vote for the “lesser evil” Gen. Paul von Hindenburg, who was said to be loyal to the country’s constitution. The slogan “Beat Hitler” meant vote for Hindenburg.

Hindenburg won, but the capitalist economic collapse continued to deepen. More than six million workers were jobless. In 1933, Hindenburg turned over the government to Hitler. As one observer put it, “The people voted for the Lesser Evil and got both.”

President Trump has refused to commit to a peaceful transfer of power should he lose in the Electoral College. This is without precedent in U.S. history.

When Trump was asked by Chris Wallace of Fox News in the first presidential “debate” to condemn white supremacy, he refused to do so. In recent weeks, Trump has made a point of publicly supporting both police and fascists who shoot and even kill Black Lives Matter protesters and their supporters in the streets.

When Wallace asked whether Trump would condemn violence by the fascist Proud Boys, Trump told the fascists to “stand back and stand by.” The GOP has also announced that it will have an army of “poll watchers,” including both off-duty police officers and U.S. special forces, no doubt sprinkled with many fascists, to intimidate and block voters.

Trump has boasted about the assassination he authorized of an anti-fascist Black Lives Matter supporter in Portland, Ore. Such extrajudicial killings, execution without a trial, are illegal under international law and an expansion of the police-state repression of the popular movement defending Black lives from police terror.

Trump says that as long as mail-in and other “illegal” votes are not counted, there is no way he can lose. Trump makes a completely false claim that the popular vote win by Hillary Clinton in 2016 was because those votes were counted. So Trump has indicated that he will not recognize a “fake” election result that shows him losing to Biden.

Amy Coney Barrett, the new judge muscled onto the Supreme Court by Trump and the Senate, is tied to the Bush Supreme Court coup. That makes her the third Supreme Court justice who was part of the gang of lawyers working for Bush in Florida to steal the election in 2000. Along with Barrett were now-Chief Justice John Roberts and Brett Kavanaugh.

Rule by the Electoral College and the Supreme Court is an assault on basic democratic rights and voting rights. Bourgeois democracy promises one person, one vote.

Democratic rights are under assault, and not just in the 2020 election. There has been a systematic wave of arrests of young Black Lives Matter activists across the U.S. Many protesters have been hit with severe charges and are facing possible sentences of years in prison or even life sentences.

In a direct attack on the right to protest, Attorney General William Barr said that sedition charges should be used against anti-racist protesters. Sedition means conspiracy and intent to overthrow the U.S. government and can result in 20 years in prison.

Defense of those arrested is being organized and needs to be widened. (See “Defend activists and organizers under attack! Defend Black lives!“ and the webinar featuring activists fighting state repression across the U.S.)

The U.S., by design, was not founded as a democracy. Democratic rights had to be fought for. The right to vote for all was not won until 1965 with the Voting Rights Act establishing one person, one vote. The Voting Rights Act was then gutted by the Supreme Court in a 2013 ruling that enabled the return of voter suppression.

The U.S. Constitution was written by and for slaveholders. In the words of Supreme Court Justice Thurgood Marshall, the Constitution and its many undemocratic features legalized slavery. At the time, there was no bourgeois democracy anywhere in the world and there were no plans for democracy.

Trump is counting on the slaveholders’ Constitution for his claim to the presidency.

Trump’s current election strategy includes extensive voter suppression to ensure his reelection in the Electoral College. The Electoral College is an undemocratic institution that was created to ensure the dominance of the slaveholders in the U.S. and continues to do something like that today.

The socialist movement is based, in part, on the fight for basic rights, from the right to vote to the right to protest.

In addition, the Socialists called for the abolition of the executive presidency altogether and its replacement by a system where the House of Representatives — the undemocratic Senate having been abolished — would select the head of government, a prime minister, by majority vote.

In a variety of forms, that continues to be a demand coming from supporters of democratic rights. In 2018, John Dingell, the longest-serving member in the history of Congress, wrote, “I served in Congress longer than anyone. Here’s how to fix it. Abolish the Senate and publicly fund elections.”

There have been many proposals to abolish the Senate, the Electoral College and the Supreme Court — all anti-democratic institutions — over the years.

An Electoral College and/or a Supreme Court mandated victory for Trump is not acceptable in any way. The call for a people’s general strike in response is essential.

From the call: “We must act to protect people’s rights! Every vote counts, and we will not accept a stolen election, no matter what form it takes, whether it’s stolen through a Supreme Court decision, the undemocratic Electoral College or violence by the far-right forces backing Trump.