Statement from the People’s Power Assembly

On the evening of Oct. 28, 2020, 14 organizers who are affiliated with the Baltimore March and Car Caravan scheduled for Nov. 4 had their Facebook pages shut down. All were administrators or editors on various Facebook pages that endorsed the action, including the Peoples Power Assembly, Youth Against War & Racism, the Prisoners Solidarity Committee, Women In Struggle/Mujeres En Lucha and Struggle-La Lucha newspaper.

This action effectively locked down all of these pages, denying thousands of members their constitutional rights. The Peoples Power Assembly page, which has over 11,000 followers, was shut down, along with several other pages affiliated with the event. Some of the targeted groups, including Struggle-La Lucha and Women In Struggle, are national in scope.

Prior to this lockout, the Peoples Power Assembly’s main phone was barraged with harassing calls from Trump supporters and from the Department of Homeland Security connected to the Baltimore Federal Courthouse.

It is important to note that the PPA in Baltimore has led protests of thousands of people since last spring, demanding justice against racism and police terror. There can be no mistake that these actions are an effort to silence that movement.

Sharon Black, an organizer with the Peoples Power Assembly, stated: “We take these attacks very seriously. They are a violation of our constitutional rights and a blatant attempt to shut down organizing for the Nov. 4 march and car caravan in opposition to the possibility of Trump stealing the upcoming election.

“It is also an attempt to silence a ‘People’s Mandate,’ which calls for jobs or income now; stimulus for workers, not billionaires; an end to racism and police terror; community control now; health care for all; no evictions, foreclosures or utility shutoffs; safe work conditions and hazard pay; no wars or sanctions; and feed the people not the Pentagon.

“This unconstitutional and undemocratic attack on our movement is a threat to activists and the general community everywhere. We are monitoring this closely to see if these attacks become more widespread as we get closer to the election.

“At present we will mobilize mass support both locally and nationally against these illegal attacks and also seek legal remedies.

“Our movement is united and strong. We will not be deterred or defeated.”

The Peoples Power Assembly is calling a press conference on Friday, Oct. 30, at 12 noon outside of our offices in front of 2011 N. Charles Street, Baltimore, MD 21218, rain or shine. 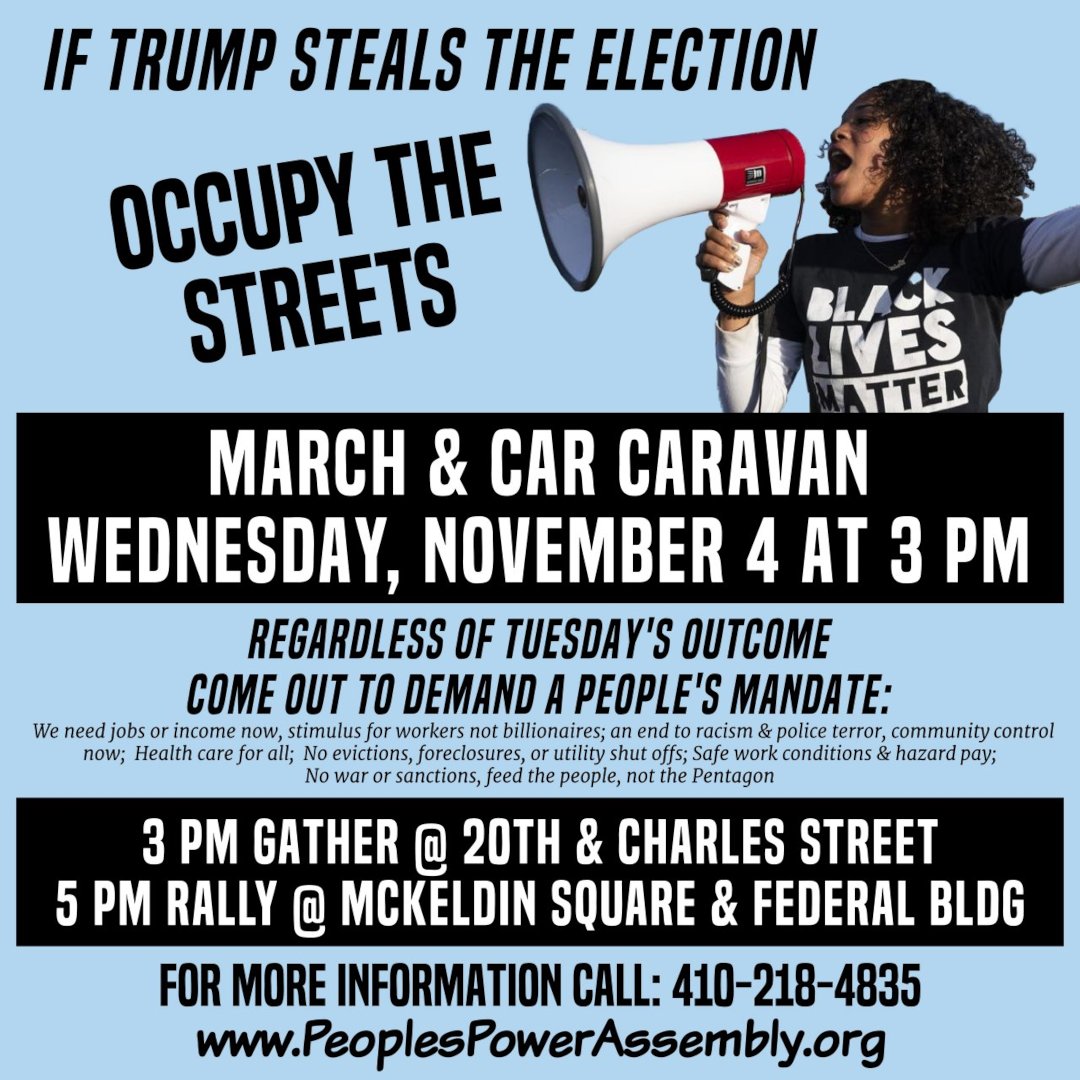