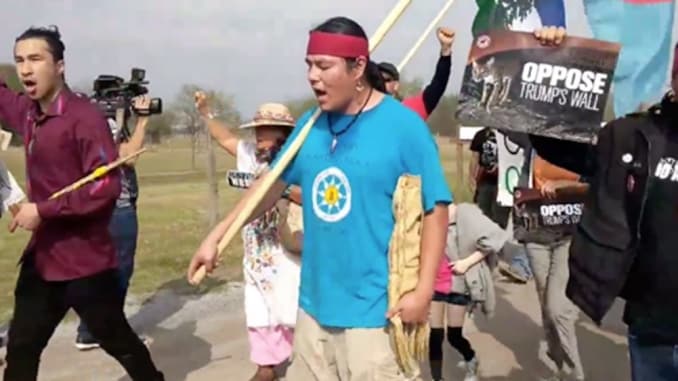 According to a statement released by the Defense Department, an additional 3,750 U.S. troops will head to the U.S./Mexico border for 90 days to aid in placing razor wire as well as with mobile surveillance operations.

This increased militarization of the border with troops, Border Patrol and other agents is not just a publicity stunt by the Trump administration, as some media are styling it. The military presence is a threat to the thousands of refugees who seek to enter the U.S. and to people in the U.S. who want to open the borders and support the refugees.

The troop increase also comes at a time when the labor struggle has intensified in the maquiladoras (factories in Mexico run by foreign companies, many of them from the U.S.) in cities just over the border such as Tijuana, Ciudad Juárez and Matamoros in northern Mexico.

Maquiladoras employ over a million workers, often in sweatshop conditions. In Matamoros, 25,000 striking workers from 48 plants recently won their demands for “20/32,” receiving a 20 percent pay raise and a bonus of 32,000 pesos. Workers elsewhere in the region are also walking out to demand higher wages.

The governors of New Mexico and California have both publicly stated that they will not let National Guard troops from their states participate in the border buildup, but many other states are collaborating.

While the Democrats are talking a big game about how they refused to capitulate to Trump’s border funding demands, they have in fact aligned themselves with the agenda of keeping Brown and Black people from entering the country through the southern border.

The congressional “compromise” agreement reached in mid-February in hopes of preventing another partial government shutdown includes $1.375 billion in new fencing along the border, including 55 additional miles of barriers. The “smart barrier” proposal will fill the pockets of high-tech and military contractors. Both capitalist parties have also agreed to an increase in the number of detention beds.

Some Democrats hypocritically supported this while simultaneously touting the “Green New Deal” plan. Yet the federal government is waiving dozens of laws protecting the air, habitat and wildlife in order to build these destructive barriers.

On Feb. 14, the White House announced that Trump would sign the compromise package, then issue an executive order declaring a “national emergency” to bypass Congress and fund a border wall anyway.

Meanwhile, refugee families entering the U.S. continue to be separated and imprisoned every day.

The federal government does not know how many children are in custody. Earlier this month, the Trump administration admitted that it is not keeping track of all the children, that they may not be reunited with their families, that there are thousands more than they had originally estimated, and that they are continuing to separate families. Attorneys involved in lawsuits over this crime estimate that more than 10,000 children have been separated from their families.

Some in the media and government point to the admission of not keeping sufficient track of the children as incompetence on the part of the Trump administration and their hired hands who enforce these policies. But if anyone actually wanted to do so, it would be relatively easy to keep track of the children and families in this age of computerized databases.

The Trump administration and its henchmen may very well be intentionally choosing not to keep track of the children. In a particularly vicious display of their imperial power, they are traumatizing and terrorizing the families as a “deterrent” to their crossing the border. Children are moved around like chess pieces, sometimes thousands of miles away from family members.

Will some of the children never be returned to their families? That is quite plausible. Jonathan White, who is supposedly leading the Health and Human Services Department’s efforts to reunite migrant children with their parents, papered over the fact that some children are not being reunited with their families by saying that removing children from “sponsor” homes to rejoin their parents would further traumatize them. This is a cover to rationalize keeping the children in foster homes or putting them up for adoption.

The majority of the refugee families are Indigenous. This theft of Indigenous children to “save” them is reminiscent of longstanding government policies that forced Indigenous children in the U.S. and Canada into adoptions and residential schools and that continue to feed them into the foster care system.

With international adoptions in Guatemala and some other countries largely off-limits to U.S. prospective adoptive parents due to a history of coercion and other issues, concerns grow that adoption mills such as Bethany Christian Services — an international agency with close ties to the family of Education Secretary Betsy DeVos — are seeking to profit from this new pool of refugee children, enabled by the supposed inability of authorities and agencies to keep track of the whereabouts of refugee families.

Immigration and Customs Enforcement (ICE) detainees themselves are doing what they can to resist the nightmare in which they find themselves, including the “El Paso 9,” hunger-striking Sikh men detained by ICE who have been placed in solitary confinement and are being brutally force-fed.

In Texas on Feb. 4, excavating equipment rolled into the area of the National Butterfly Center in preparation for construction of a border barrier there. The Butterfly Center is seeking a restraining order since any barrier will be highly destructive to butterflies and many other species of life.

In the same area, Carrizo Comecrudo Indigenous people and allies marched in protest on the Rio Grande levee where the wall will be built. “We’ve had enough. They are digging up our people and any time that you dig anybody up and you put them somewhere else, that’s just ethnic cleansing all over again … genocide,” according to tribal chairman Juan Mancias.

The Carrizo Comecrudo and allies are currently establishing camps on the riverbanks near several ancestral areas, including a graveyard in danger of destruction. Local police and the FBI are reportedly trying to undermine this peaceful resistance.

The Indigenous Tohono O’odham nation continues to oppose any plans for border walls or other barriers. Their reservation is roughly the size of Connecticut and straddles the colonial border. Around 2,000 of their tribal members live on the Mexican side. The increased Border Patrol and military presence has made simple things such as visiting relatives and friends much more difficult.