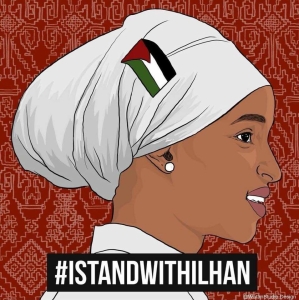 Newly elected U.S. Rep. Ilhan Omar of Minnesota is under attack by members of both the Democratic and Republican parties because she has called out a pro-Israel lobbying organization, the American Israel Public Affairs Committee (AIPAC). Omar is a Somali-American woman, and along with Rep. Rashida Tlaib, is one of the first two Muslim women elected to the U.S. Congress.

The fury unleashed against Omar brings to mind the struggle of Rep. Adam Clayton Powell Jr., a strong ally of the Civil Rights movement during the 1950s and 1960s. Like Omar’s critique of AIPAC, Powell’s fight against racism was unacceptable in the halls of Congress.

After a long and valiant struggle, Powell was forced out of his congressional seat. But in the process, he was embraced by anti-racist and progressive activists, not only in his congressional district in Harlem, but nationwide. The progressive movement of today needs to be ready to stand with Rep. Omar against this current racist and reactionary campaign.

AIPAC is the lobbying group whose mission it is to keep U.S. elected officials paying no mind to Israel’s bloody repression of the Palestinian liberation struggle. It’s considered one of the most influential lobbying organizations in Washington.

AIPAC facilitates frequent, large campaign contributions to candidates, passes out all-expense-paid trips to Israel for politicians and their families and probably does much more that will never be revealed publicly. In doing so, AIPAC buys congressional silence about the illegal settlements that displace Palestinian families, the murders of Palestinian children by the Israeli “Defense” Forces (IDF), the blockade and constant military attacks against Gaza, the racist treatment of African immigrants and much more.

For years the U.S. political establishment, college administrations and corporate media have been trafficking the idea that any criticism of Israeli apartheid is anti-Semitic. This propaganda war has been ratcheted up as the Boycott, Divestment and Sanctions movement (BDS) has grown on college campuses across the country and awareness of Israeli apartheid has gained ground. The reaction has been swift and merciless. Journalist Marc Lamont Hill was fired by CNN in November 2018 for his solidarity with the Palestinian struggle.

It isn’t only Omar’s criticism of AIPAC — which is simply not done in Congress — that has prompted the reaction against her. She also went after death merchant and newly appointed Special Envoy to Venezuela Elliot Abrams in a House Foreign Affairs Committee hearing on Feb. 13 for his historic, murderous role in Latin America and his conviction in the Iran-Contra scandal during the Reagan administration.

It’s no surprise that the howls of condemnation have been erupting from right-wingers in Congress and even from Trump — who has called for Omar’s resignation. But the list of Democrats attacking her is also a long one, and includes prominent figures like House Speaker Nancy Pelosi, Chelsea Clinton and a host of lesser-known Democrats hoping to make a name for themselves by defending Israeli repression of the Palestinian people. It points to the bipartisan nature of support for Israel.

AIPAC is funded by right-wing, pro-Israeli forces in the U.S. and is a useful tool for Israel as it fights for any of its own interests that may from time to time come in conflict with its sponsor: U.S. imperialism. And the millions of dollars that flow in and out of AIPAC have fueled the false notion that Israel controls U.S. foreign policy.

But those millions that AIPAC spends are overshadowed by the billions of dollars dispensed from the U.S. treasury to fund the Israeli occupation of Palestine and the bloody repression against the Palestinian people carried out to maintain it.

Reuters reported on Jan. 29 that Republican Sen. Lindsey Graham and Democratic Sen. Chris Coons, after returning from one of the previously mentioned all-expenses-paid trips to Israel, called for the $38 billion in military aid already guaranteed to Israel over the next 10 years to be considered only “a floor.”

Perhaps the bribery of the trip helped them to feel good about their work, but this funding has been a constant of U.S. imperialism for decades and few have ever even hinted at an interruption of the funding — even in the aftermath of some of the worst atrocities committed by the IDF.

Israel is a military outpost for the interests of U.S. imperialism as it seeks to extend its control over oil resources and strategic military advantage throughout the Middle East and North Africa. The historic theft of Palestine, a bloody land-grab much like the genocidal campaign against Indigenous people in the Americas, was and remains central to the interests of U.S. imperialism.

The struggle against U.S.-backed and U.S.-funded Israeli apartheid cannot be won in Congress. The anti-war and anti-racist movements need to defend Rep. Omar and extend support for the Palestinian people in the streets.