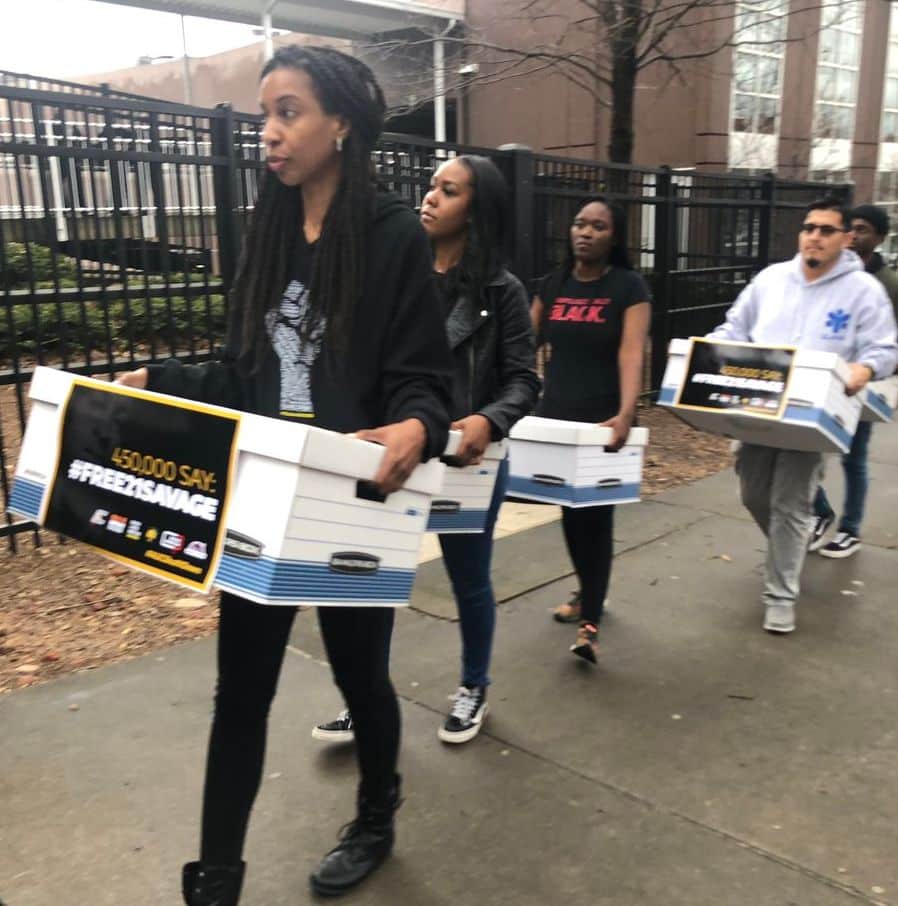 Of the 4.2 million Black immigrants in the U.S., an estimated 619,000 are undocumented. Well-known Atlanta recording artist and songwriter 21 Savage became the face of this Black immigrant community when he was detained by U.S. Immigration and Customs Enforcement (ICE) on Super Bowl Sunday.

On Feb. 12, more than 50 protesters demanded his release outside Atlanta Immigration Court.  There, Black Lives Matter organizers and others watched as court employees dumped petitions signed by over 450,000 people demanding 21 Savage’s release into a trash can — yet another example of what this government thinks of Black and Brown lives.

That day, 21 Savage was released on bond after nine days in jail. But he will still face a deportation hearing.

When he was a minor, 21 Savage’s family overstayed their work visas, and he, like almost 2 million other children, was left without legal status.

21 Savage has a pending application for a U visa (as the victim of a crime) with the U.S. Citizenship and Immigration Service. USCIS knew his address and had all his contact information since he filed the application in 2017.

The artist never hid his immigration status from the U.S. government, yet federal agencies took no action against him — until he began attacking the government’s racist immigration policies. ICE cooked up an “aggravated felony” charge to justify his arrest — then abruptly withdrew the charge on Feb. 14.

21 Savage isn’t a flight risk or a danger to his community; in fact, his contributions to local communities and schools in the city where he grew up are but one example of the remarkable type of person he is.

Through his musical talents, 21 Savage was able to achieve great success in the music industry and make contributions to the impoverished community of his childhood. He holds an annual back-to-school initiative not far from where he grew up on Glenwood Road in Atlanta. He recently launched the Leading By Example Foundation to mentor local young people.

21 Savage has spoken out against U.S. immigration policies, both in his songs and on the Tonight Show with Jimmy Fallon. Since ICE could have taken him into custody ever since he filed his U visa application, we can only assume that this arrest was intended to humiliate and intimidate him and anyone else who dares to fight back.

According to a statement released by his attorneys, 21 Savage “will not forget this ordeal or any of the other fathers, sons, family members and faceless people he was locked up with or that remain unjustly incarcerated across the country. And he asks for your hearts and minds to be with them.”

The Trump administration’s racist policy of separating children from their families and losing them, as well as caging Black and Brown children, will not be ignored or forgotten. Tactics like those used against 21 Savage only convince us to continue to fight. Victories like his release after the sham court proceedings on Feb. 12 embolden us. We are on the right side of history.