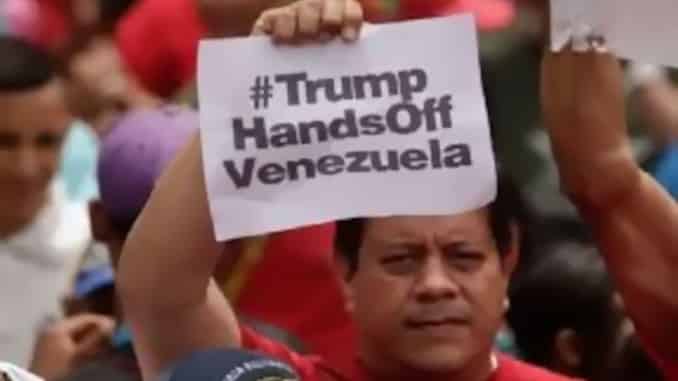 U.S. imperialism is preparing a new flashpoint in its political and economic war against Bolivarian Venezuela for Feb. 23. Self-appointed but U.S.-anointed pretender Juan Guaidó announced on Feb. 12 intentions to directly confront Venezuelan sovereignty with what he says will be “humanitarian aid” caravans crossing from neighboring Colombia.

The statement of the Revolutionary Government of Cuba, reported at Granma.cu on Feb. 13, called on the international community to mobilize to prevent the U.S. military adventure against Venezuela.

Cuba’s statement noted: “Between Feb. 6 and 10 of 2019, several military transport aircraft have flown to the Rafael Miranda Airport in Puerto Rico, the San Isidro Air Base in the Dominican Republic and other strategically located Caribbean islands, most certainly without the knowledge of the governments of those nations. These flights took off from U.S. military facilities where Special Operation Troops and U.S. Marine Corps units operate. These units have been used for covert operations, even against leaders of other countries. …

“It is obvious that the United States is paving the way to forcibly establish a humanitarian corridor under international supervision, invoke the obligation to protect civilians and take all necessary steps.

“It is worth recalling that similar behaviors and pretexts were used by the U.S. during the prelude to wars it launched against Yugoslavia, Iraq and Libya, which resulted in tremendous human losses and caused enormous suffering.”

Although all articles are attributed to the Tribune News Service, the version published on Feb. 8 by the South China Morning Post revealed more details. For example, the equipment included 90 military-grade radio antennas. A flight tracking service revealed that the use of the aircraft changed on Jan. 11 from domestic to international flights from Miami International Airport to Colombia and Venezuela.

During dozens of flights, the plane often returned to Miami for only a few hours before flying again to South America. The article reported, “In many cases, the flights would head on to Bogotá or Medellín before returning to Miami.

“If a U.S. entity was trying to provide arms to a Venezuelan resistance movement, it would be taking a familiar page from the history books. The CIA operated a dummy airline, known as Air America, from the early 1950s until the mid 1970s for air operations in Southeast Asia, including airdropping weapons to friendly forces.

“More than a decade later, Sandinista soldiers shot down a cargo plane taking weapons to the U.S.-backed Contra rebels fighting the Nicaraguan government. A U.S. Marine veteran, Eugene Hasenfus, survived the 1986 crash and told reporters he was working for the CIA, paving the way for his release and return to the United States.

“Curiously, one of the figures in the Ronald Reagan administration instrumental in delivering support to the Contras, former assistant secretary of state Elliott Abrams, was named by President Donald Trump late last month as his special envoy overseeing policy towards Venezuela.”

Committee members spoke against U.S. military intervention in Venezuela, but bought the manufactured imperialist narrative, even displaying pictures of the bridge supposedly closed by the Maduro government to prevent humanitarian aid — a bridge that had never been open.

However, it is important to remember how anti-intervention public and congressional sentiment has been turned around. Opposition to the invasion of Iraq in 1990-1991 was overcome by false claims of atrocities by Iraqi soldiers in Kuwait.

On Feb. 14, Puerto Rican activists demonstrated their solidarity with President Nicolás Maduro, protesting the use of their nation to attack Bolivarian Venezuela at the Federal Court in Old San Juan. Former political prisoner Oscar López Rivera joined the action.

Meetings and protests worldwide and throughout the U.S. continue, with coordinated demonstrations planned on Feb. 23, a national protest in Washington, D.C., on March 16, followed by the No to NATO action on March 30, which will also focus on the threat to Venezuela.

Although the U.S. claims 50 countries line up with its aggression, there are 193 countries in the United Nations, meaning 143 do not. India has declared it will continue to buy oil from Venezuela. China and Russia have spoken out against U.S. aggression.

In 1823, U.S. President James Monroe declared the Americas and the Caribbean to be the U.S. sphere of influence. Monroe recognized existing European colonies, but declared that any new European attempt to colonize or control would be considered hostility against the U.S. It ignored the struggles for independence from Spain being waged by Simón Bolívar or the great Haitian revolution.

Since the 1960s, formerly colonized countries in Africa, Latin America and East and West Asia (also known as the Middle East) have fought for independence and control of their resources, allying in, for example, the Non-Aligned Movement and the Organization of Petroleum Exporting Countries.

While Trump’s planned “wall” against migrants at the border with Mexico is a racist act against people seeking refuge, the renewal of the Monroe Doctrine that the Americas are the U.S. backyard is an act of hostility against a world yearning to develop independently of U.S. imperialism.

Remember the Maine, the Lusitania, the Gulf of Tonkin — and prepare to resist the current false narrative and any dramatic incident used as a pretext for intervention.