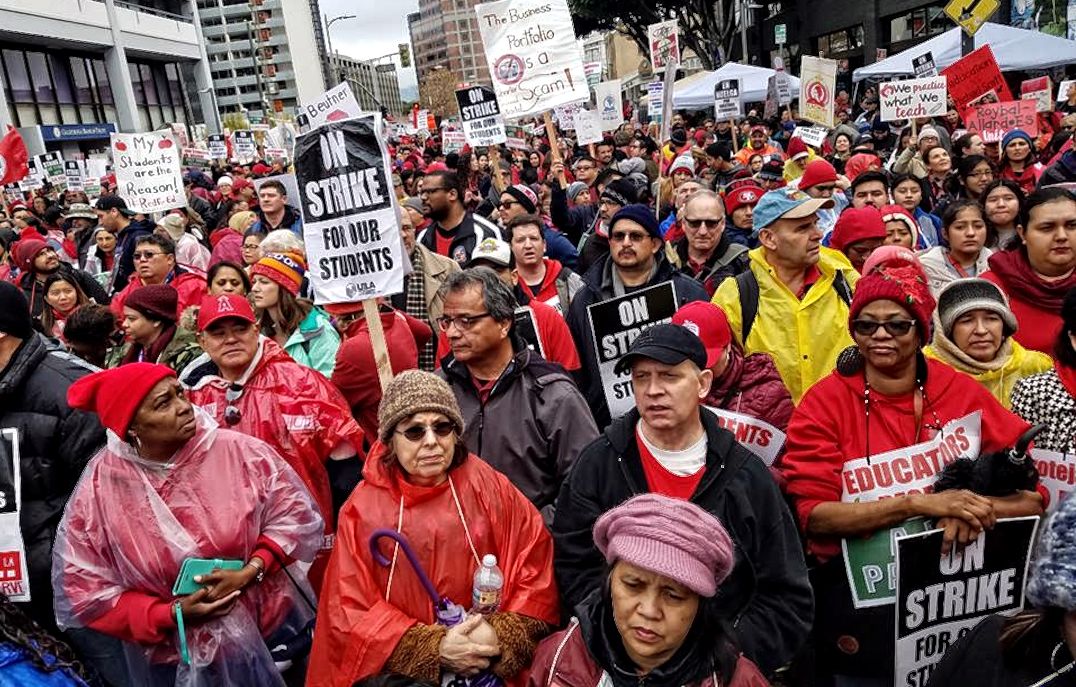 For almost two years the Los Angeles Unified School District (LAUSD) and Superintendent Austin Beutner, whose background is business and not education, had rejected proposals to invest in public schools.

They rejected the teachers’ demands for lower class sizes; rejected insuring enough full-time nurses, counselors and librarians sufficient for the needs of every school; rejected a commitment to quality education, including music, art and science — not more testing.

Instead, the district was aggressively pushing ahead plans to enable the increase of charter schools over public schools in order to defund public education in favor of private schools for the sake of corporate interests and the disempowerment of the working class. This is what the ruling class is doing nationally.

And, that is what the historic UTLA strike was about, pushing back against the attack on public education and the 97% people of color who make up the students of the Los Angeles Unified School District.

According to many teachers, the Jan. 22 contract agreement had significant gains that inspired respect for teachers. This is in spite of the fact that there were also disappointing allowances given to LAUSD and their corporate interests. The overall positive impact has encouraged teachers in other cities nationally from Oakland, Calif., to Denver to Virginia, where education workers are ready to strike as well.

The strength of the union was bolstered by the massive community, student and parent support for the strike.

In spite of pouring rain almost every day of the strike, rallies of about 30,000 teachers were joined by thousands of community members, other unions and students. And, the strike was very visible to the community since the schools had active picket lines that community members could easily take part in or address with honking horns starting at 7 a.m.

That strength forced the district to agree to clauses in the agreement finally addressing the demand for full-time nurses, librarians and counselors. The agreement is to begin immediately by covering about half of the need this year and then completing coverage next year.

After seeing the tremendous outpouring of solidarity for the teachers, the mayor intervened, attempting to avoid a longer strike, one which could affect his political aspirations.

“There were some real disappointments due to fears causing a lack of militancy on the part of the union leadership. But, overall and in terms of making progress that we will continue to build on, this was a victory,” said Ron Gochez, a longtime United Teachers Los Angeles member and teacher who’s also a part of the organization Unión del Barrio, which has many members in UTLA and played a major role in raising community support for the strike.

Gochez mentioned an example that especially helped the community: forcing the district to agree to assist migrants threatened because of their immigration status. The agreement specifies that the district must provide “at least one attorney and necessary support staff to address immigration related concerns … and coordinating legal support from local organizations already doing this work.” This support includes a hotline for students and families facing the threat of deportation.

Another gain in the new contract is the elimination of the clause in the past agreement with LAUSD that did not allow a cap on class sizes. The union leadership refused to back down from the demand to eliminate Section 1.5 of Article 18 of the previous contract, in spite of threats to end negotiations.

An additional gain seen by many teachers is the creation of 30 community schools in “high need areas,” run primarily by local leadership made up of community and UTLA members — leadership that includes having a say on the budget for those schools, where usually it is just the principal and the district who determine budget and school policy. This will have a profound effect, especially on Black and Brown communities in Los Angeles.

However, the danger posed by charter schools and co-location schools that share the same space with public schools is still a serious threat to public education and the right of students to quality education.

“We want to get rid of them completely,” said Gochez regarding charters. “They are a cancer and every penny spent on charters is a penny taken away from public education.”

In relation to co-location schools, Gochez mentioned how these schools leach off of the money spent by public schools in terms of sports, libraries and more. They do this when charter students use these services but the charter pays little to maintain them.

“Co-location charters are a cancer and also a vulture. If enrollment at public schools goes down, they try to take those rooms,” Gochez said.

In addition, the classroom size, librarian and counselor additions — although in a much better position of being implemented in the schools than before this contract was signed — can be sabotaged if LAUSD forces UTLA into a grievance procedure regarding those agreements.

These disappointments may be why, according to Gochez, about a quarter of the teachers didn’t vote at all, and about 19 percent voted no.

“This is significant. … We didn’t get everything we wanted, but it was a step toward progress.” In terms of what the district was first offering, originally it included no caps on class sizes or guarantees of nurses in the schools and offered only a 2 percent wage increase, but they were forced to raise that to 6 percent.

“I think if we held out for another week, we may have been able to get more, but now we just need to keep on fighting,” Gochez continued.

When considering how unions in general have been on the defensive and, like in this situation, up against billionaires fighting for privatization along with a ruling class that nationally sees educating our working class as an impediment to profits and control, the fact that UTLA held a strike resulting in an even more united force with the community — one that received national respect — means that any attacks or backsliding on the part of the billionaires, their politicians and LAUSD will be met with a now much stronger ability to fight back.

Another lesson of this strike concerns a glimpse into the future. Socialists always talk about taking the means of production away from the ruling class billionaires so that the working class can make the vital decisions concerning people’s lives and children’s lives.

Imagine if it were the teachers who decided how much would go into public education — would their concerns be just about themselves? Although teachers don’t make nearly enough, especially when considering that they reach into their own pockets to make up for the lack of funds in teaching their students, buying pencils and teaching aids and more, what was heard the loudest from them was about the needs of the students and the communities they live in.

Who is more qualified to decide the fate of our children — those that put students’ concerns first or those that represent Wall Street’s interests, like Austin Beutner the superintendent of the Los Angeles Unified School District?

Let’s let Gochez illustrate this with his talk at a press conference during the strike at the Dr. Maya Angelou Community High School, where he teaches:

Thank you UTLA and the community and students for fighting the good fight.