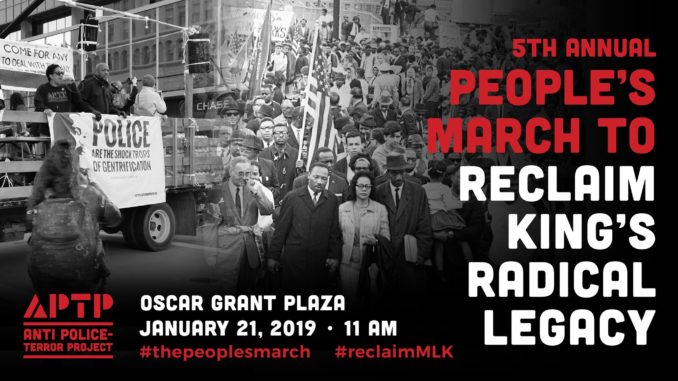 We will hold Oscar Grant Plaza from sunrise to sunset. For the march, plan to:
Gather at 11:00 am
March at noon

For the 5th consecutive year, the Anti Police-Terror Project calls the Bay Area into the streets for the People’s March to Reclaim MLK’s Radical Legacy.

MLK’s legacy has been whitewashed for many decades. The state would have us believe he was a passive figure. The truth is he was a radical leader, unshakable in his demands for rational change: an end to capitalism, to war, to empire, to poverty, and to white supremacy. We take this opportunity every year to celebrate the true spirit of this revolutionary.

January 2019 marks the 10th anniversary of the murder of #OscarGrant. This year on #ReclaimMLK Day, we honor the mothers of those lost to police violence, and lift up their resistance and resilience.

The People have had enough. For seven months, we waged a People’s Campaign for a just and equitable Oakland. Our campaign galvanized tens of thousands of Oaklanders and most importantly, it did not end in November. We continue that Campaign and its demands into the new year.

Demands:
– Justice for ALL victims of police terror and their families
– Housing as a human right: truly affordable housing for all in need, immediate shelter for our unhoused neighbors, and public land for public good.
– A just economy that works for everyone, puts people over profits, provides living wage jobs with dignity for all, requires corporations to pay their fair share to do business in our cities, and ensures that any development benefits the community.
– Community-based public safety: Invest in prevention, not criminalization; make all police use of force transparent and accountable.
– Quality education for all: Fair pay for teachers. No cuts, no closures, no more charters.
– Real sanctuary for all: Abolish ICE, end criminalization of our most marginalized, and guarantee the safety of all queer, Black, Brown and Indigenous communities.
– Environmental justice: clean, air, water, and safe food supplies for all.
Indigenous sovereignty and respect for sacred sites.