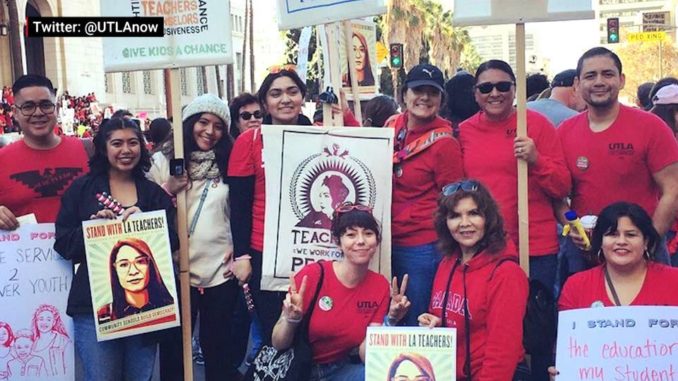 December 20 — After negotiating with the Los Angeles Unified School District (LAUSD) for 20 months, and without a contract for a year, 35,000 members of United Teachers Los Angeles (UTLA) have set a strike date of Jan. 10.  Strong community and labor support is mobilizing for the teachers.

LAUSD is the second largest school district in the country. There hasn’t been a strike since 1989.

In the union’s strike vote, 83 percent of membership participated with 98 percent voting in favor. Three hundred unions in the County Federation of Labor have voted their support, and LASchoolReport.com has announced that the California School Employees Association — also representing LAUSD workers — has asserted their right to carry out a sympathy strike.

On Dec. 15, a mass rally and march in downtown Los Angeles — estimated at up to 50,000 people — illustrated union members’ determination and support in a big way. Thousands wore red shirts, banged drums and snaked through the streets. Chants of “U! T! L! A!” “Union power!” and “Beutner! Beutner! You can’t hide! We can see your greedy side!” echoed from the walls of the city’s business center.

Who is Austin Beutner?

The face of LAUSD’s intransigence in bargaining is the newly appointed superintendent of schools, Austin Beutner. His May 2018 appointment to that position drew an outcry from educators, staff and parents. His appointment was made through the support of Los Angeles billionaire developer Eli Broad, Netflix billionaire Reed Hastings, the Walton Foundation and others who are fueling and funding the national campaign to “charterize” and privatize public schools.

Beutner is a former investment banker with a reputation for breaking up companies and selling off the parts. He worked in Russia to help sell off all the workers’ socialized property of the former Soviet Union. He was also the publisher of the Los Angeles Times until he was fired in 2015. He plans to break up LAUSD into 32 “neighborhood networks.” According to UTLA’s website, in July he reportedly told a group of corporate supporters that the school district may “be no more” by 2021.

With Beutner’s addition as superintendent, the Los Angeles School Board is dominated by pro-charter and privatization forces. UTLA’s membership knows that they are fighting not only for fair wages and working conditions, but for the survival of a public school system serving 90 percent students of color and 85 percent low-income.

LAUSD claims that there is not enough in the budget to meet the union’s demands of a 6.5 percent salary increase, smaller classroom sizes, more nurses and mental health counselors, and more school supplies. UTLA negotiators point to the district’s $1.7 billion reserve fund, which would be more than sufficient to make all the improvements that educators say must be made.

Classroom conditions have already reached what any objective observer would recognize as an emergency situation, with some classes having 45 or more students, school premises lacking even the most basic maintenance and nurses rarely available for sick or injured students. Often there is not even paper available. LAUSD claims the teachers don’t care about their students, but on average, teachers spend $500 annually out of their own pockets for supplies.

The charterization and privatization drive is a racist and discriminatory campaign. The positive effects of the massive struggles and victories to desegregate public schools in previous decades are being chipped away. Charter schools can reject any students with no oversight. As families with more resources transfer their children to a charter, public schools lose children and teachers. The students left behind in public schools are often low income, those struggling with developmental disabilities, and as a whole, are disproportionately students of color.

In a recent Jacobinmag.com  interview, UTLA Secretary Arlene Inouye, explained why the charter school drive has made such an impact: “This is a form of segregation … with the charter school often having more resources, not being held up to the same standards, choosing the students they want, leaving the students needing more services in the public school. … Privatization serves corporate interests and is about control. Given the years of attacks on public schools, it’s understandable why some parents are looking to the charter model.”

A historic series of teachers’ strikes that started in West Virginia and then spread to Kentucky, Oklahoma, Arizona and Colorado, began 2018. Of the five, only Colorado is not a right-to-work (for less!) state where workers’ rights to organize are legally obstructed . All of those electrifying struggles won at least partial — and what was thought were improbable — victories. They also broadcast the steep decline in living standards and classroom conditions in public schools nationally.

UTLA says that those strikes have strengthened the confidence and resolve of their 35,000 members. Community support has grown as well. If the current momentum for a UTLA victory is any indication, 2019 could be a year of victories for teachers and for workers in general. All out to support public schools and UTLA members!