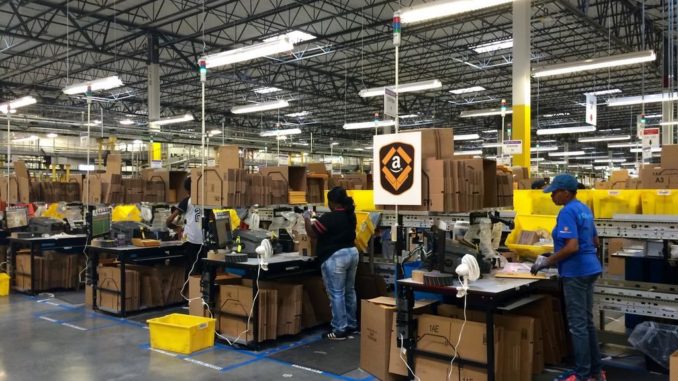 It was still dark driving to work on Saturday, Nov. 3. That’s when I heard on the news that part of an Amazon warehouse had collapsed. Two workers had been trapped and killed. It was unclear which warehouse was impacted. Was I reporting there?

No word from Amazon, which constantly emails and texts us. I didn’t know what to think. When I arrived, I saw trees down, and roads to the adjacent smaller warehouse on Holabird Avenue were blocked off. Police and firefighters were stationed around the area, but the building I worked in seemed intact.

Everything felt surreal. The atmosphere was business as usual. I expected at Stand Up ― our early morning “Amazon pep rally” ― that there would be a moment of silence to recognize the workers who died in the building collapse. Somehow, my heart felt even sadder for their deaths, maybe because Amazon didn’t seem to recognize their value, not even a minute of morning silence.

My co-workers agreed with me. There should have been something, some way of recognizing the workers who died. Only after the 10-hour shift had passed were the flags around the building lowered to half mast.

So what is Stand Up? Every Amazon worker knows what I’m talking about. I hated it. It is about 10 minutes of phony pep talks that are really designed to squeeze every drop of human effort out of every worker.

At the start of the shift, workers gather by department to get their workstation assignments. Stand Up starts with perfunctory stretch exercises, supposed to cut down on injuries. Following this, the manager ― with a mic in hand ― exhorts us each to be the “power picker” of the day. Sometimes, Michael Jackson music is played to energize Amazon’s morning pep rally. I doubt that Jackson authorized the free use of his music being to make billionaire Bezos richer. And at every Stand Up you either have to “clap it out” or do a raised fist huddle at the end.

I always hung back, disgusted at this display of New Age capitalist hypocrisy. I wasn’t the only worker who pretended to be half asleep. Very few of us displayed any enthusiasm, even lured with the offers of discount merchandise or free lunches as rewards for a “productivity record.”

The stories that are told by Amazon workers about the levels of expected productivity are not exaggerated in the least. In fact, probably understated. Pickers, which is the job I do, are assigned to a individual workstation. We are relatively isolated with just a computer, conveyor belt, plastic bins and 6-foot-tall robot towers that continually move on the floor.

From the moment we start until we turn the station off, our motions are clocked and watched ― yes, there are cameras everywhere. How quickly you pick each item to put it in the bins is measured. Slow? You can be written up. And I was written up for this.

If you make a mistake, especially if it’s misjudging something and marking the item missing, it is a write-up. Three write-ups and you’re on the way out the door, if not fired outright.

A young worker who had been a picker at the warehouse for about two and a half years clued me in on the production rate. He told me when he first started the highest number for picking rate was 250 per hour; the expectation now is as high as 450.

What’s it like? The computer screen tells you to pick a specific item from a specific shelf in a tall robot bin ― so tall, that if the item is on the top shelf  it can mean climbing a ladder. Get it, scan it, and put it in one of four or five bins indicated by a flashing light. All to be done in as little as 6 seconds.

You cannot sit. There is nowhere to do so with the exception of the portable ladders and this is forbidden. Even if the conveyor belt jams up and everything stops, you can’t rest.

On top of that, everyone gets exhorted frequently to pick faster. Win the prize. Be the “power hour picker.”

Several times I was singled out by my supervisor, who told me I was too slow and at the bottom rung of pickers. Amazon shames slower workers to push production ― they actually announce names.

Breaks that are barely breaks

We get two breaks during our 10-hour shift; both are supposed to be 30 minutes. One is paid and the other you have to punch out. But the truth is that you could spend up to 5 to 10 minutes walking to your break area, and maybe longer, plus the same returning to your workstation. You are expected to start up in exactly 30 minutes.

What is equally aggravating is the lunch break punch-in and punch-out system. You cannot punch-in early, so you have to stand and wait until the very minute strikes. But if you accidentally punch back in at your workstation-out 3 minutes late, you will be docked for an additional hour.

The pressure to meet production standards is so intense, even bathroom breaks are difficult to take. The bathroom may be quite a distance either on the other side of your floor or on a different floor altogether, difficult to reach within the time restrictions. On one shift, I was so worried about being written up that I didn’t go to the bathroom and had an accident.

Like leaving jail at the end of the shift

Okay, I’m older. I stumble at the end of the shift. I try not to. I try to walk straight and act like it doesn’t hurt, but it’s an act. One day at lunch, I  asked a worker who’d been there three years if it gets any easier. She said, “Nope. You get adjusted, but it never stops hurting.”

Other workers told us that conditions in the summer were brutally hot. “They finally installed fans at the workstations.” But people “still do fall out.” It’s so noticeable that there are signs posted in the bathroom stalls indicating the color of urine and other signs of dangerous dehydration.

Although weapons and phones are not allowed in the building ― there is no scan when you enter. But to exit is like leaving jail. Place your keys and change in bins, walk through metal detectors, pick up your phone if you left it in a locker, scan your badge, go through the turnstiles and hit the doors to leave.

It’s dark out, but I’m happy to finally get to my car and sit down.