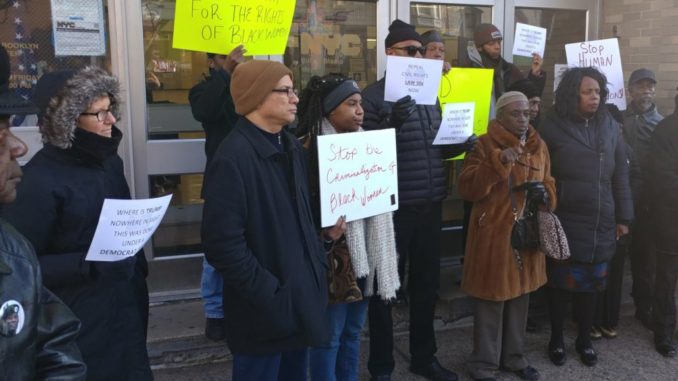 More than two dozen people gathered outside a New York City Human Resources Administration office in Boerum Hill, Brooklyn, on Dec. 11, for a rally and press conference to demand “Justice for Jazmine.”

“We are here today to demand justice for Jazmine Headley and all the unknown Jazmine Headleys — Black women who are victimized for simply trying to live like human beings and take care of their families,” declared Amadi Ajamu of the December 12th Movement, which called the lunchtime rally.

Headley, a 23-year-old African-American single mom, and her infant son Damone were attacked inside the overcrowded HRA office on Dec. 7. Headley had been standing in line for hours, holding her child, waiting to apply for daycare vouchers so she could look for work. Since few chairs were provided for those seeking assistance, Headley sat on the floor.

Instead of providing her with a seat, HRA security threatened her and told her she had to stand. Headley refused. Police were called and attacked Headley, violently wrestling her child from her arms as angry bystanders protested. One cop threatened the crowd with a taser.

Headley was arrested on charges of trespassing, resisting arrest and “endangering the welfare of a child” — her own child! — whom she was trying to protect from the violent NYPD!

Fortunately, a bystander caught the assault on video and posted it to Facebook. The outrageous case of police brutality went viral. People were furious at the racist, sexist, abusive attack — and it caused many to wonder whether this kind of treatment was common.

The answer, activists and witnesses said, is yes.

New York State Assembly member Latrice Walker said she had spoken to Headley’s mother, who was caring for 18-month-old Damone: “The baby is traumatized and still seeking medical attention.”

Walker said: “I remember what it was like as a child, the long lines and long wait. Enough is enough. Poverty is not a crime.”

Jail the cops, not moms

Attorney Roger Wareham added: “We demand that HRA Commissioner Steven Banks release the history of incidents like this. We demand the police officers involved be arrested and all charges against Jazmine Headley be dropped.

“The police and HRA employees do this because they know they will not be held accountable. The real criminals are the police department,” said Wareham.

During the rally, several individuals and families who were seeking assistance in the HRA office — Black, Latinx, Asian and white — joined the crowd. When Wareham declared that the cops should be fired and arrested for abusing human rights, several people shouted their agreement, adding that the cops were guilty of child abuse as well.

Brooklyn Defender Services, which provided legal representation to Headley, also helped get the word out and raised funds for her defense. BDS’s Lisa Schreibersdorf explained: “In our experience, people are often treated abysmally when seeking support from the many city bureaucracies that are supposed to be helping them. While their experiences are not always caught on video, they tell us about their struggles — from randomly terminated benefits to hours-long wait times and hostile security staff.” (Gothamist, Dec. 10)

Under intense public pressure, Brooklyn District Attorney Eric Gonzalez and Mayor Bill de Blasio later dropped all the charges against Jazmine Headley. After five nights in jail on Riker’s Island, she was finally released at 9 p.m. on Dec. 11.

But the struggle for justice for Jazmine and her son isn’t over. They are examples of the millions of workers whom the capitalist system is unable to provide with jobs and decent living conditions, and instead criminalizes based on racism and poverty.