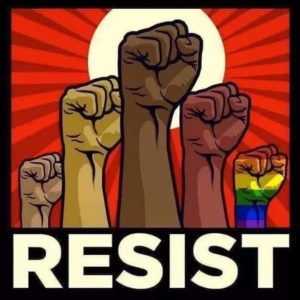 It is evident that a reactionary white supremacist political element, one that has been growing larger for the past ten years and whose belligerence has been steeled and egged on by the Trump regime, will not simply go away. Nor has there appeared any official mainstream desire to put an end to this rising threat.

Every day there is a new instance of shocking violence and disturbing behavior towards people for living while Black, Brown, Indigenous, Asian, Muslim, woman, migrant, LGBTQ+ identifying or leftward leaning. The recent shootings of two elderly Black people at a Kroger’s in Kentucky and the massacre of Jewish people at the Tree of Life Synagogue in Pittsburgh cannot be separated from the 5,000 military troops ordered to the border because of a caravan of migrant workers and their families, forced from their homes and countries because of the history of U.S. intervention. The hardening of the political establishment and the ultraright turn of a significant portion of the U.S. population comes at a crucial historical juncture in this country and the planet.

The continuing environmental degradation brought about by an economic system built on exploiting working and poor people and the environment, straining resources and polluting the air, water and food sources, has put us near a dangerous precipice. This fact alone, coupled with militaristic adventures from imperialist and former colonialist countries and their proxies has caused mass emigration, where migrants flee their lands for safety and economic security, risking everything, even their lives.

Around the world, economic uncertainty remains, and in this country, wages have not grown to match the rising cost of housing and other necessities of life. Communities of Black, Brown and poor people in the U S. are being cleansed, people being pushed/forced out by developers working in conjunction with local politicians, who have passed repressive ordinances that allow for increased policing. Police terror and mass incarceration continue to rob Black, Brown and Indigenous people of their lives and feed the prison system new bodies of color.

Indigenous lands continue to be ravaged by mining interests and pipelines, coupled with attempts to deprive Indigenous people of the right to vote, and all the while the population of Indigenous people faces genocidal conditions.

This reality of the capitalist system, its ongoing teetering, the effect it has on working, poor and oppressed people trying to survive and take care of their families, of the growing ultraright trend here in the U.S. and around the world that whips up racist violence among people of European descent against darker-skinned people, together with the specter of fascism and the continuing destruction of the natural world, will not simply put itself neatly back into a container.

At the root of all these issues is the system of capitalism. And only a grand struggle can push back the fascist threat, unite workers of all nationalities against war and for a working peoples’ program for our needs. Without principled political unity, one built around programmatic demands and determined to uproot the fascist and white supremacist threat, such a struggle is impossible. It is up to all progressive and revolutionary people and organizations to fight through the morass and political differences to begin to forge what is necessary.

To begin this, let us strategize, build in every corner and community to inaugurate a new era of struggle.

Let’s not fail to recognize the current threat.

Let us not fall into the void, nor resign ourselves to defeat and become demoralized. We can win — but not without struggle, not without unity.

Venceremos! All Power to the People!