POLARIS 21 was a large-scale French naval exercise in the Mediterranean that took place from November 18 to December 3, 2021, off the island of Corsica between France and Italy.

Officially, the aim of the training was to test the capabilities of the sea and air elements to face future wars, using the latest systems and naval vessels to develop tactics.

The scenario of the exercise—which saw the participation of 23 ships, one submarine, 65 aircraft and 6,000 personnel from six NATO nations including the U.S.—was to enable the Allies to maintain control of the Mediterranean in the event of a threat from the Russian air force and navy.

Journalists have come into possession of documents which detailed plans for the NATO coalition to use the POLARIS exercise to send a French carrier strike group to preemptively attack Russia in the case of a Russian invasion of Ukraine, which the U.S. and NATO were in the process of provoking. The UK signed an agreement with Ukraine that granted it access to naval bases in Ukraine that could be used to attack the Russian Federation.

According to Slavisha Batko Milacic writing in Global Village Space, the POLARIS 21 exercise became for the Russian Federation a signal of the real preparation of NATO for the start of hostilities against it—as happened when a full-scale U.S.-NATO military operation to affect regime change in Libya (Operation Odyssey Dawn) followed two NATO air-sea exercises (Baltops-2010 and Frisian Flag-2010).

The POLARIS 21 exercise was carried out in conjunction with the U.S. Army Europe-Africa’s Exercise DEFENDER EUROPE 21.

It was set up under the premise that Russia was an aggressor power like the Nazis—though it was the Soviet Union that had stood up to the Nazi invasion in World War II.

Significantly perhaps, the Headquarters of the U.S. Army Europe-Africa’s command for the so-called “Eastern front” is in Wiesbaden, Germany, which was headquarters of the Nazi Wehrkreis XII during World War II. 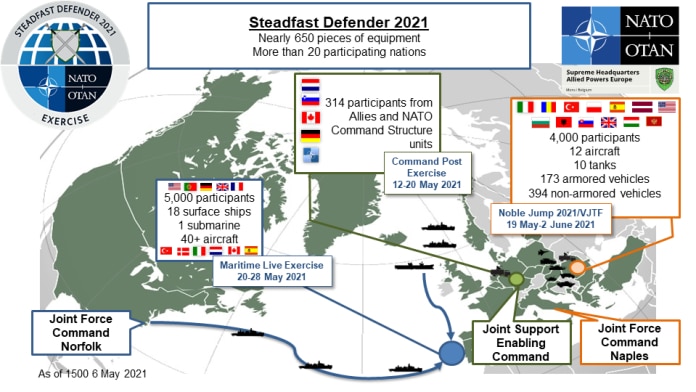 From the Russian point of view, its special military operation in Ukraine was necessary in the face of a potential preemptive strike by NATO—combined with the fact that NATO wanted to use Kyiv as a base for conducting a war against the Russian Federation.

Ukraine has now very clearly evolved into a proxy war. The West’s aim is to overthrow Putin’s government, fitting the pattern of past military interventions against nationalist regimes in Libya, Ukraine, Syria and Iraq.

In Syria, Russia had supported the sovereignty of the legitimate government of President Bashar al-Assad, while the U.S. and EU supported various jihadist groups like al-Qaeda, al-Nusra and eventually ISIS, in Arabic called DAESH—the amalgamation of all terrorist groups.

Wikipedia reported that 26 NATO members participated in the Defender-Europe 21, a U.S.-Army led military exercise including operations in the Baltics that extended into March. This month, 14 NATO countries are participating in a followup exercise, Steadfast Noon, designed to train flight crews to handle thermonuclear bombs.

These exercises assume Putin’s willingness to use nuclear weapons—though Russia was put on high nuclear alert because of heavy U.S. and NATO provocation, and U.S. leaders have been the ones more frequently threatening nuclear war.

In 2019, the Trump administration withdrew from the INF treaty (Intermediate-Range Nuclear Forces Treaty) which put a cap on the deployment of U.S. and Russian strategic warheads.

This was a good example of the move away from diplomatic engagement by U.S. leaders waging a new Cold War that has already become hot.