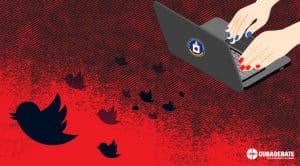 On Monday, Oct. 24, at noon Twitter users noticed a modification to the tagging policy. The social media platform began tagging a group of public media outlets as “affiliated with the Cuban government” and the tag would in turn appear on messages sent or shared from any individual account that linked to those publications’ websites. On Tuesday, Facebook shut down a score of profiles of supposed supporters of the Cuban Revolution but left hundreds that publish manuals for homemade bombs, call to burn police stations, announce armed expeditions, disclose private data for political assassination, threaten and insult generally from accounts abroad.

As if waging an online video game war, the U.S. platforms have decided this week to direct their laser sight into Cuba’s quadrant to mark and silence the “characters” of an enemy that has no way to defend itself.

Some might argue that it’s honorable to be labeled as a publicly funded government media outlet, and it certainly is. But Twitter does not intend to glorify Granma, Cubadebate, Radio Habana Cuba, Juventud Rebelde, and others, but to reduce the dissemination of their messages.

Without prior notice and in a beastly manner, the transnational has extended its control policies to the Caribbean, the rush to erase uncomfortable voices, the hypocritical correction of its community standards, and, once again, it exercises censorship on a global scale, simply by tweaking its algorithms and without the procedures that would allow justifying such decisions.  To top it all, it considers private media to be impartial and more genuine than their publicly funded counterparts, so that on planet Twitter anything that smacks of private interest is off-label. In this biased view, users have no right to judge content on its merits.

But the biggest absurdity of all is that it is a U.S. government-linked corporation like Twitter that labels others as “media affiliated” with a state. It’s not hard to find evidence that the platform has worked in increasing intimacy with the White House ever since U.S. politicians began pressuring tech companies to regulate content. In a 2011 legal filing easy to find online, Twitter agreed with the Federal Trade Commission to “implement, monitor and adjust its security measures” under government observation and has since turned over thousands of users’ data to government agencies.

Forbes magazine reported in August that the U.S. tops the list of governments demanding data be handed over to tech platforms, with nearly two million user accounts handed over since 2013.  In the election that brought Biden to the White House, Twitter was one of many Silicon Valley corporations that worked directly with U.S. government agencies to determine what content should be removed in order to “secure” the election contest.

Whenever Twitter reports that it has purged thousands of accounts suspected of inauthentic behavior and acting at the direction of foreign governments, it will never be accounts from NATO countries or other friends of the U.S. government, and it doesn’t take much imagination to explain the cause. The favorite sanctioned ones are Russia, China, Iran, Venezuela, and Cuba, of course.

On May 12, 2020, the platform blocked 526 profiles managed from the island. It did not explain its decision to the users who saw their accounts abruptly canceled, but the next day, on May 13, Michael Kozak, then Acting Assistant Secretary for Western Hemisphere Affairs, told the press that the State Department had identified “more than four dozen Cuban accounts” that violated Twitter’s policies – announced by the government agency, not the super and “independent” private company.

Almost simultaneously, The Miami Herald published statements from another official on the progress of relations with Twitter: “We have an ongoing dialogue with technology companies and are working with them to share our thoughts on attempts by state and non-state actors to leverage their platforms to spread disinformation and propaganda,” said Lea Gabrielle, director of the Global Engagement Center (GEC), also at the State Department.

Facebook’s track record as a U.S. government-affiliated media outlet is even darker and quite well-known. I cite as a sample the scandal starting in 2021 by the then White House spokeswoman, Jen Psaki, who told reporters that the executive compiled lists of people who publish on that platform “problematic” content so that Facebook “can remove them”.

Journalist Glenn Greenwald, of The Intercept, reacted angrily: “Union of corporate and state power, one of the classic hallmarks of fascism”.  Greenwald was talking about Facebook, but this could be a great label to hang on Twitter as well.