Oct. 15 – A rally in the Bronx, New York, today demanded “No to NATO, War and Racism!” The action, which drew more than a hundred, was organized by the Bronx Anti-War Coalition as part of the United National Antiwar Coalition’s call for opponents of wars and sanctions to get “back to the streets” from Oct. 15-23 against U.S. war moves toward Russia and China.

At an opening rally in Fordham Plaza, community organizers, speaking in both Spanish and English, decried the $70 billion spent on the U.S. proxy war in Ukraine while residents of the Bronx – the city’s poorest borough – struggle with evictions, hunger, decrepit schools and racist police violence.

Some community members said they were not surprised the U.S. government was spending a fortune to wage war on the other side of the world. But they were nonetheless shocked to learn Washington was arming and training neo-Nazi hate groups in Ukraine.

Protesters then marched through the busy Fordham Road shopping district, chanting, “Billions for the Bronx, not for war” and “Not another nickel, not another dime for imperialist crimes!”

Outside the U.S. Armed Forces Recruiting Station on the Grand Concourse, Bronx Anti-War Coalition founder Ritchie Moreno condemned the poverty draft. He talked about how military recruiters prey on poor and oppressed youth in underfunded schools.

The protest was notable not only for being held in the working class, primarily Black and Latinx South Bronx neighborhood, but for being the first street action by a coalition of antiwar groups in New York City since the latest phase of the military conflict in Ukraine began. Up until today, only the Socialist Unity Party had held street actions in the city calling for “No war on Donbass, Russia and China, U.S. out of Ukraine.”

Visit UNAC’s website for the full list of actions between Oct. 15-23 in the U.S., Canada and Europe.

About 40 people gathered today at a book signing at the General Baker Institute for Medea Benjamin’s new anti-war book. Afterward, they marched down the median of busy Livernois Avenue to the freeway overpass. 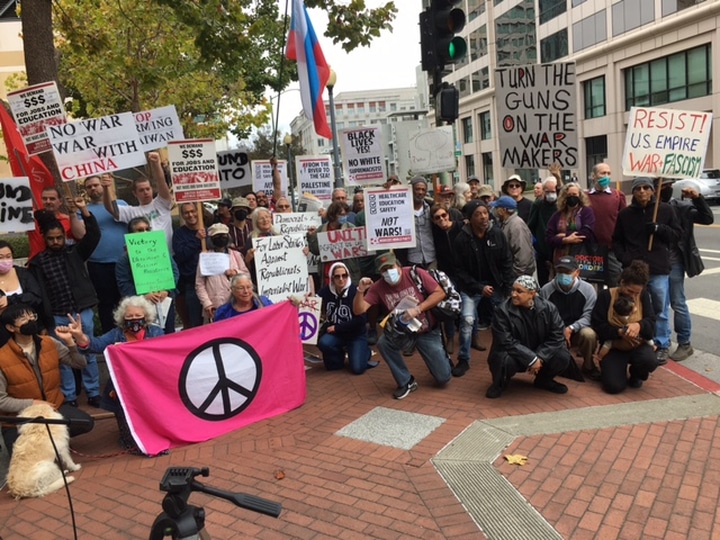