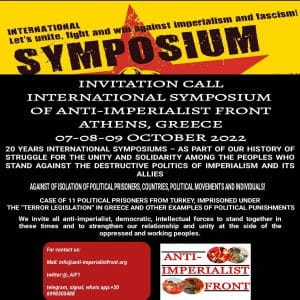 Following is a talk by John Parker, Socialist Unity Party / Partido de Socialismo Unido, to the International Symposium of the Anti-Imperialist Front in Athens, Greece, on Oct. 8.

The recent pronouncement by Zelensky to refuse negotiations with Russia after calling on NATO to launch a preemptive nuclear strike against Russia makes it clear that the U.S. is aggressively driving the world towards World War III, and like its war crimes committed in Hiroshima and Nagasaki prove, it has no care about the killing of children and other civilians.

Instead of representing the people most hurt by this U.S.-led NATO war and bombing of desperately needed oil supplies, the puppets of U.S. imperialism in Europe continue to sacrifice working and poor people to remain in good favor with U.S. imperialism.

Instead of heeding the needs of the people in the U.S., drowning in price increases and suffering poverty and homelessness, President Biden spends $70 billion to prop up a fascist regime in Ukraine that inspires fascist white supremacists to kill Black people in supermarkets and Muslims praying in Mosques.

Instead of helping to fight global warming and new strains of the COVID virus, the two parties of the ruling class in the U.S. – the Democrats and Republicans – push us closer to a nuclear holocaust by provoking Russia in Ukraine and China in Taiwan.

Instead of fighting growing poverty in the world, the U.S. heaps more sanctions upon any country that dares to fight for its sovereignty and independence from U.S. imperialism, thus exacerbating the poverty of children and food insecurity. It is estimated that the freezing of Afghanistan’s assets by the U.S. will cause 1 million children to starve to death. And, while Cuba suffers from a hurricane disaster, instead of real assistance, the U.S. maintains its crippling and illegal economic sanctions against it.

These international war crimes by the U.S. are assisted by Western corporate media, which legitimizes and disseminates information that serves to justify U.S. imperialist wars. The New York Times, for example, which is considered the newspaper of record and influences world news, has been used from 1915 to the present to drive the U.S. into war: against Germany in World War I, with the Lusitania incident; to 1964 in the Gulf of Tonkin incident, to push war against Vietnam; to the lies about WMDs to push war in Iraq and kill 500,000 children; to Libya, Syria and now Ukraine – using unverified information directly from neo-Nazi regiments leading the Ukrainian army.

I, for example, recently came back from Lugansk. And what I witnessed and the testimony I received from the people there made it crystal clear that the Ukrainian military is not only targeting the civilian population but is led by Nazis. Yet, this view is never presented in the corporate media.

It is of utmost importance for the international community to come together in providing the truth to the world and helping to build news sources that can be trusted to counter U.S.-led NATO’s war drives, like the current lies about the referendum in the Donbass region that was far more democratic and inclusive than the elections held in the U.S.

This hypocrisy is especially acute in the U.S., where now millions of Black and Brown voters are being denied their right to vote. In addition, exclusionary immigration policies, along with the greatest number of incarcerated people in the world, many of whom are unable to vote, and an electoral college system that denies the popular vote prove the undemocratic nature of U.S. elections and democracy in general.

Last month the openly Nazi Azov Batallion representatives met with politicians in Washington and at community centers here in the U.S., and no condemnation of those politicians was heard, showing the weak state of the anti-war and anti-imperialist movements in the U.S.

The growth of fascism and the push towards World War III by NATO and its puppets must be stopped.

Now more than ever, it is of utmost importance that international anti-imperialist organizations come together in international solidarity with unified strategies to fight against NATO wars. To do this, we must also build a unified working-class movement in our own countries by highlighting how these wars deny our right to health care, housing, and economic security and further expose how the contradictions of imperialist economic policies gravitate towards fascism, war and poverty.

We must expose the fact that our international working class, the class that produces the wealth of nations and is thus capable of tremendous power – if united can stop this current backsliding of history and defeat NATO and its drive towards human destruction.