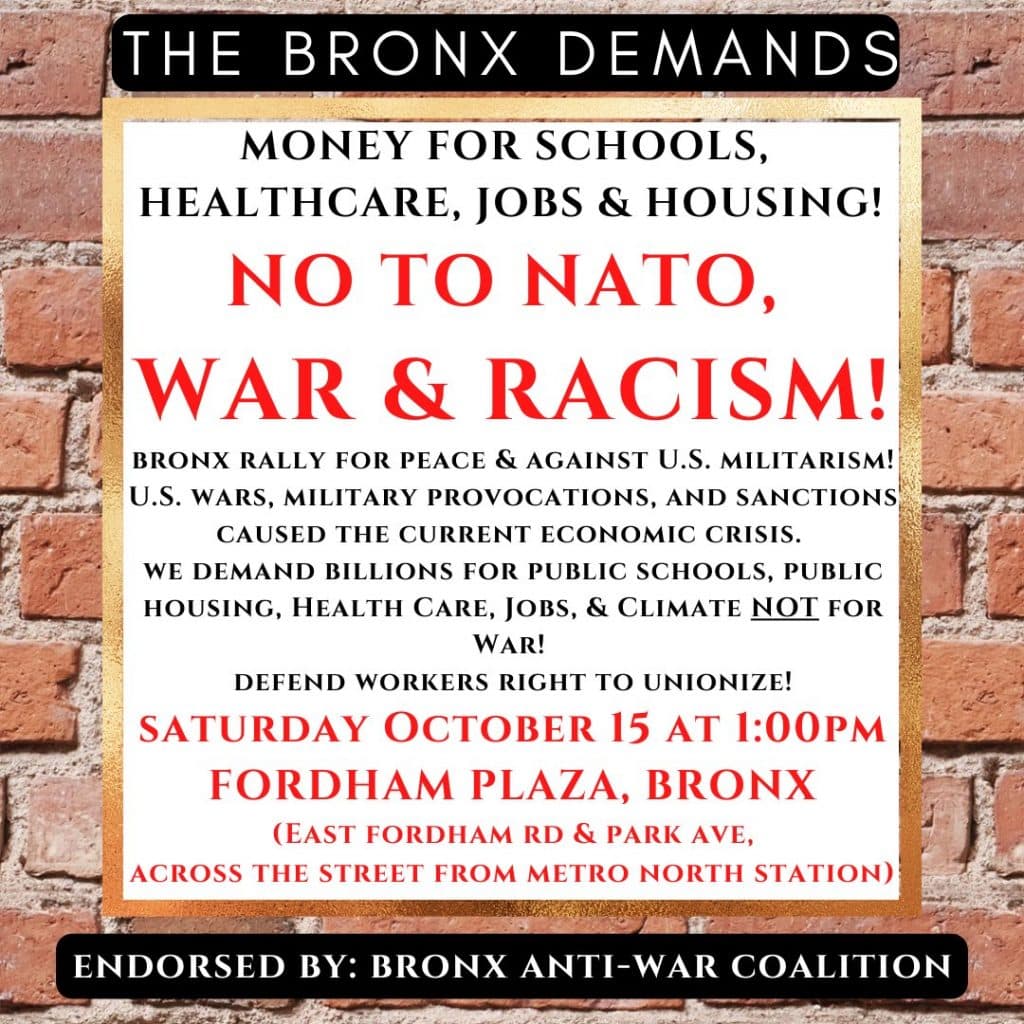 This demonstration is being held in coordination with United National Antiwar Coalition (UNAC), which has called for a week of action Oct 15 – 22 to stop Washington’s military aggression against Russia and China, and to stop the endless wars in Iraq, Syria, Somalia, Palestine, and everywhere.
If your organization would like to endorse this action please contact us here: https://bxantiwar.org/?page_id=102
________________________________________________
The South Bronx is one of the poorest, most oppressed parts of the U.S. More than 40% of children in the Bronx are living in poverty. For the third year in a row, the Bronx led the state in eviction filings. The Bronx had the highest unemployment rate in the nation in 2020. The South Bronx has rates of asthma hospitalizations 21 times higher than other NYC neighborhoods.
“Where’s the $50 Billion for the Bronx?”
The U.S. government has spent nearly ~$50 Billion in a proxy war waged by NATO against Russia in Ukraine. Sanctions against Russia have backfired and caused an economic recession and inflation crisis in the U.S. which is devastating the South Bronx.
We the workers of the South Bronx demand an end to the apparent unlimited funds devoted to war, death and destruction caused by U.S. sanctions and military, and demand that Billions be spent on addressing the dire economic and social need for housing, jobs, schools, clean air and water.
We’re also calling on the so-called “most progressive” and most diverse NYC city council to restore the $469 Million in budgets cuts to the City’s Department of Education Budget. At a time of severe learning loss resulting from system underfunding and privatization of schools, and exacerbated by the pandemic, the City is choosing to fund more cops instead of funding education for our youth.
The workers of the Bronx and NYC must organize and defend the right to unionize. When we support unionization efforts for Amazon, Starbucks, and all workers, we also support the fight against racism, colonialism, and imperialism. The strike is a weapon workers possess that can cripple and destroy the billionaire class’s economic and political power. When workers unionize, workers strike. Strikes can stop the flow of capital and shut down the economy. Unions are what global oligarchs like Jeff Bezos and Howard Schultz fear most because strikes can bring the ruling class to its knees.
No to NATO, war and racism! Invest in our youth and communities NOW! Defend workers right to unionize! Build worker power!
Join the Struggle-La Lucha Telegram channel