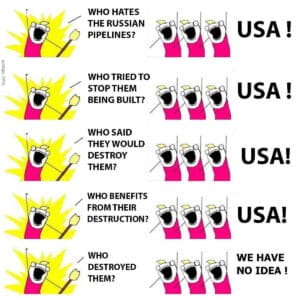 You didn’t see it in the U.S. monopoly-controlled media, but throughout the month of September, there were mass demonstrations in Germany, the Czech Republic, France, Spain, Moldova and Belgium. A hundred thousand in Berlin; 70,000 in Prague.

Primarily they were protests against skyrocketing energy prices and soaring inflation. They were also against war and the sanctions on Russia that are seen to be directly responsible for the cost of living crisis across Europe. Some protests demanded the opening of the Nord Stream 2 pipeline.

And then the pipeline was blown up.

Was this deliberate sabotage, a criminal act of war?

There is a precedent for this kind of pipeline sabotage by the United States. Some 40 years ago, the CIA blew up a Soviet natural gas pipeline from Siberia to Europe in an operation dubbed Farewell Dossier, as documented by Thomas Reed, a former U.S. Air Force officer.

Today no one thinks it is accidental that there were four almost-simultaneous explosions damaging both pipelines, Nord Stream 1 and 2. Neither pipeline was in current use: Nord Stream 2 was never opened, and Nord Stream 1 had been shut down for weeks because U.S. and NATO sanctions had blocked normal maintenance.

Few dispute the charge that U.S. and NATO forces sabotaged Russia’s gas link with the rest of Europe.

The intention to do this was announced by President Joe Biden back in February. Biden declared, “If Russia invades … then there will no longer be a Nord Stream 2. We will bring an end to it.” A reporter asked, “How will you do that exactly since the project is in Germany’s control?” Biden responded, “I promise you, we will be able to do that.”

After the Sept. 27 reports of the pipeline bombing, Poland’s former minister of defense and former foreign minister, Radoslaw Sikorsky, publicly congratulated the United States for sabotaging the Russian pipeline. However, Sikorsky, currently a member of the European Parliament and well-connected in Washington and in NATO circles, has since removed his tweet (“Thank you, USA”), which was seen as a confirmation of U.S. and NATO guilt. 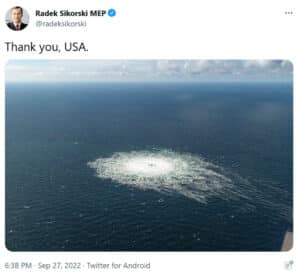 On social media, a retired U.S. Army colonel and former Pentagon adviser is quoted as saying that the U.S. likely attacked the Nord Stream pipelines to stop any reopening of Russian gas to Germany. Pointing to reports that thousands of pounds of TNT were used, the colonel says that only the U.S. Navy Special Operations and the British Royal Navy have that capability.

The Baltic Sea, where the bombing was carried out, is controlled by NATO. In June, the U.S. Navy Sixth Fleet was reported to be engaged in underwater vehicle “practice” mining and demining operations in the area. In addition, a large U.S. Navy fleet formation passed nearby just five days before the explosions were detected.

The bombing won’t end the protests in Europe against skyrocketing energy prices and the war-induced inflation, though NATO probably hopes it will. The bombing could move the U.S./NATO proxy war into an open war, which may be intentional.

The U.S. is in a war economy. War means industry, be it a hot war or an economic war, such as sanctions.

The U.S. military-industrial complex is in heavy production mode. Since 2014, the U.S. has spent billions on arming and training the coup regime in Ukraine. In the last six months, the Biden administration has pumped $70 billion into Ukraine.

The U.S./NATO proxy war in Ukraine against Russia is seemingly a bottomless pit for military spending.

A recent Financial Times report noted that military stockpiles in Ukraine are not about high-tech weapons that need chips, but rather basic artillery, calling it “the return of industrial warfare.”

“Fetishes for high-tech weapons and lean manufacturing have obscured the importance of maintaining stockpiles of basic kits [like artillery shells]. Total annual U.S. production of 155 million artillery shells, for example, would last only about two weeks in Ukraine. … Inexpensive ammunition that you can use on a large scale is essential.”

U.S. military spending has never been higher. The U.S. now has a trillion-dollar military budget.

The U.S. spends more on its military than any other country in the world by a massive margin.

The U.S. also has the deepest national debt in the world. The Oct. 4 New York Times reported that the U.S. “gross national debt exceeded $31 trillion for the first time on Tuesday.” But, of course, they don’t mention that military spending is the biggest chunk of debt.

Some have suggested that the big increases in the military budget under Biden were meant to rescue the economy from the COVID recession, including the $25 billion bailout of Boeing and the airline industry, a major part of the military-industrial complex. But using military production as a stimulant, like any other stimulant, eventually turns into its opposite and becomes a devastating depressant.

The sharp oil price increases internationally are fueled by the U.S./NATO proxy war against Russia and the U.S. sanctions that have blocked Russian gas to Europe. The U.S.-British-controlled oil monopolies are a key part of the military-industrial complex.

Military production is a different kind of capitalist commodity production. The products of the military-industrial complex are commodities. However, as Karl Marx points out in “Capital,” capitalism requires that commodities have a use value. Marx says that a commodity is “a thing that by its properties satisfies human wants of some sort or another.”

The process of capitalist production and exchange means that the capitalist, to realize a profit, must produce a useful product.

The U.S. military budget has devalued the dollar, increasing the debt. With no use value, there is no return value to compensate for the vast expenditures required to produce the jets, guns, cannons, tanks and other weapons of mass destruction in the Pentagon’s budget.

War is inflationary. Inflation did not start with the U.S./NATO proxy war in Ukraine, but the war put a fire under the smoldering inflation that was already there.