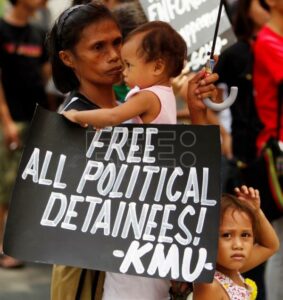 Earlier this month, newly elected Philippines president and neo-fascist demagogue Ferdinand “Bongbong” Marcos Jr. visited Singapore, a fellow country-member of the Association of Southeast Asian Nations (ASEAN). It is important to note that ASEAN was founded to suppress Communist movements that spread throughout the continent, including China, Vietnam, and Korea.

At this recent meeting, Marcos and the president of Singapore explicitly denounced the government of Myanmar and demanded that Myanmar release all political prisoners.  Marcos’ office released a statement after the meeting in Singapore, “The leaders expressed support for ASEAN’s active role in assisting in Myanmar to overcome the crisis and to return to the path of democratization.”

The military junta in Myanmar has been charged with human rights violations against its political opponents. However, this description fits another government – that of President “BongBong” Marcos.

Since 2016, the Philippines has suffered neo-fascist rule. First at the hands of U.S.-backed dictator Rodrigo Duterte and now by his successor, Bongbong Marcos, who took office in June. The individual office holder has changed, but the political reality remains the same.

The political prisoner crisis in the Philippines has exploded in the past six years. There is a severe and disturbing irony in BongBong Marcos lecturing any country about their treatment of political prisoners when his fascist government is one of the most notorious for using prison and torture to subdue progressive and revolutionary political forces.

The Duterte regime took hundreds of political prisoners while it was in power. The recorded number is likely far less than the actual. Further, this number does not include the thousands that Duterte’s troops murdered in furtherance of the misnamed “war on terror.”

Bongbong Marcos has some nerve chastising anyone about political prisoners, especially considering his vice president is Sarah Duterte, the daughter of Rodrigo Duterte. This Marcos regime will simply continue the work of Duterte and Ferdinand Marcos before that.

Down with fascism in the Philippines! Release all political prisoners now!