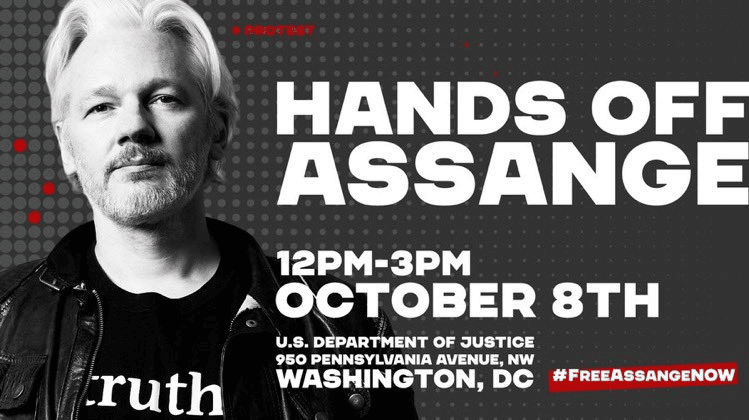 Assange supporters:
As you have probably already heard, there will be a major gathering at the US Dept of Justice in Washington, DC, next Saturday, Oct 8, 2022, from 12:00 – 3 pm. “Hands Off Assange” is a solidarity action with “Hands Around Parliament,” being planned for the same day in London, by Stella Assange and others. The DOJ action will be at the main US Dept of Justice, 950 Penn Ave NW. Our rally will include a symbolic “circling” of the Justice Department, with yellow ribbons.
We have a great lineup of speakers, including: Pulitzer Prize-winning journalist Chris Hedges, Jill Stein, Garland Nixon, Ben & Jerry’s co-founder Ben Cohen, EPA whistleblower Marsha Coleman-Adebayo, and CIA whistleblower John Kiriakou, among others. Speakers will call for an end to the persecution of Julian Assange, who faces 175 years in prison on unprecedented charges, for publishing truthful information in the public interest. We call on the US to drop its attempts to extradite Assange to the US for trial.
The rally will also feature music, spoken word, and greetings from advocates who are not able to join us, in person.
“Activists are coming to DC from all over the country to celebrate one of the most important journalists of our time,” said Misty Winston, a leading organizer of the rally. “Julian Assange exposed the crimes of the most powerful governments and corporations in the world today, and he should be praised, not prosecuted.”
We hope you can join us for this important event on Oct 8. We will also have an “after-party” at Busboys & Poets, 450 K St NW, following the rally. For more information, contact dcactionforassange@gmail.com.
Join the Struggle-La Lucha Telegram channel