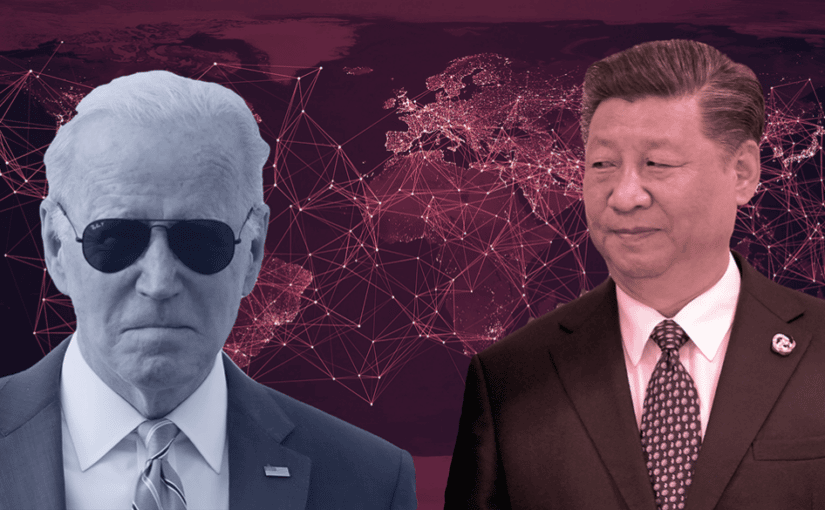 In the following article, first carried in the Morning Star, Kenny Coyle details the “major reversal in U.S.-China relations”, most recently highlighted by Biden’s unequivocal declaration that the U.S. would commit its forces in the event of a military conflict between China and its renegade island province of Taiwan. This, Kenny explains, is “viewed with alarm in Beijing”, as it “increases the possibilities of a U.S.-China war.”

The article outlines the key points of the three Sino-U.S. joint communiques, noting how the second was swiftly undermined by the ‘Taiwan Relations Act,’ and drawing attention to the ‘Taiwan Policy Act’, currently making its way through the U.S. legislature. This would allow for an “enduring rotational U.S. military presence” on Taiwan, something that the U.S. has not maintained since 1979 when it established diplomatic relations with the People’s Republic. As Kenny rightly concludes, this “suggests dark days lie ahead.”

On Sunday 18 September, U.S. President Joe Biden told the U.S. news program 60 Minutes that the U.S. military would go to war in Taiwan should Chinese forces land on the island chain to enforce its sovereignty.

While China has never ruled out the last-resort use of military force, it has always insisted on its preference for peaceful reunification. Biden’s most recent comments repeat previous statements, including one made in Japan, Taiwan’s former colonial occupying power, in May. They are, however, the first since U.S. House Speaker Nancy Pelosi’s journey to Taipei in August which resulted in China holding major military exercises after her visit.

Pelosi’s meeting with the political leadership of Taiwan certainly enraged China and inflamed tension in the area. This was no diplomatic faux pas; it was the whole point of her trip.

An official visit by the third most senior politician in the U.S. on a U.S. Air Force special air mission Boeing C40 military jet emblazoned with U.S. livery to a territory in which Washington does not have an embassy or a consulate was a deliberate provocation.

China got the message. Once Pelosi’s jet departed Taiwan’s self-declared air space, rejoined by her U.S. Air Force escort, China announced a series of live-fire military drills around the main island of Taiwan and reaffirmed its declaration of sovereignty over the territories administered by the Taipei authorities.

Despite claims by the White House that Biden’s remarks do not challenge the One China policy, they essentially confirm the abandonment of “strategic ambiguity” over U.S. military intentions and the adoption of a policy of “strategic clarity” instead.

The move is viewed with alarm in Beijing, not simply because it is seen as breaking these longstanding commitments but because it increases the possibilities of a U.S.-China war. It is feared that such a shift will encourage separatist forces to escalate moves toward establishing a nominally independent Taiwan, thereby triggering the very conflict the U.S. claims it seeks to avoid.

The Biden administration’s moves represent a major reversal in U.S.-China relations that started with president Richard Nixon’s visit to China 50 years ago. In 1971, one year before Nixon’s trip, representatives of the People’s Republic of China (PRC) took up China’s seat at the United Nations, one formerly held by the Republic of China (ROC). The ROC’s leadership under Chiang Kai-shek had retreated to the island province of Taiwan and some neighbouring island groups after their civil war defeat on the Chinese mainland in 1949.

On the final day of Nixon’s 1972 visit, the U.S. and China issued a joint statement, known as the Shanghai Communique, that began the gradual process of diplomatic normalization between the two countries.

The communique stated in part: “The U.S. acknowledges that all Chinese on either side of the Taiwan Strait maintain there is but one China and that Taiwan is a part of China. The U.S. government does not challenge that position. It reaffirms its interest in a peaceful settlement of the Taiwan question by the Chinese themselves.

Although the text used “acknowledges” rather than the unambiguous “accepts” or “agrees,” the U.S. side did make it clear that it did not challenge the One China interpretation, which was in any case the position of the ROC authorities, with which the U.S. maintained diplomatic relations at the time.

Crucially it recognized the possibility of peaceful reunification by the Chinese themselves, both those on the mainland and Taiwan, and committed the U.S. to de-militarisation.

Full U.S.-PRC relations were formalized on January 1 1979 and a second joint declaration was issued. This stated: “The U.S. recognises the government of the People’s Republic of China as the sole legal government of China. Within this context, the people of the U.S. will maintain cultural, commercial, and other unofficial relations with the people of Taiwan.”

Naturally, this was interpreted by the Chinese as excluding official diplomatic and military relations between the U.S. and the authorities in Taipei. However, just a few months later, Congress passed the Taiwan Relations Act. This drastically altered the terms that had just been agreed.

The Act stated that the U.S. was “to provide Taiwan with arms of a defensive character; and to maintain the capacity of the U.S. to resist any resort to force or other forms of coercion that would jeopardise the security, or the social or economic system, of the people on Taiwan.”

The U.S. had unilaterally appointed itself the guardian of Taiwan and its social and economic system. This was hardly non-interference.

The third communique, by contrast, adopted during the Reagan presidency, August 17, 1982, set out much clearer parameters. These included:

“Respect for each other’s sovereignty and territorial integrity and non-interference in each other’s internal affairs constitute the fundamental principles guiding China-U.S. relations.

“The U.S. government attaches great importance to its relations with China, and reiterates that it has no intention of infringing on Chinese sovereignty and territorial integrity, or interfering in China’s internal affairs, or pursuing a policy of ‘two Chinas’ or ‘one China, one Taiwan.’

“The U.S. government states that it does not seek to carry out a long-term policy of arms sales to Taiwan, that its arms sales to Taiwan will not exceed, either in qualitative or in quantitative terms, the level of those supplied in recent years since the establishment of diplomatic relations between China and the U.S., and that it intends gradually to reduce its sale of arms to Taiwan, leading, over a period of time, to a final resolution.”

Anxious to enlist China in an anti-Soviet alliance, the U.S. clearly made serious concessions to Chinese positions that went beyond the first two declarations. However, these principles have never been implemented by the U.S. side in practice.

Challenges to China’s sovereignty and territorial integrity are openly canvassed by Washington, while U.S. arms sales to Taiwan have ballooned. According to defensenews.com Taiwan has a $14 billion backlog of U.S. arms, delayed due to the pandemic and the diversion of U.S. supplies to the proxy war in Ukraine.

In Washington today, the anti-China hawks are in full flight. A new piece of legislation, the Taiwan Policy Act, is currently being drafted by the Senate’s foreign relations committee.

This goes beyond previous policy in that it would commit the U.S. to a wider range of programs, an extended definition of “Chinese aggression,” including cyber attacks, social media disinformation, and economic coercion.

It provides for $6.5bn in military supplies and training programs over the next few years to pay for “war games, full-scale military exercises, and an enduring rotational U.S. military presence that assists Taiwan in maintaining force readiness and utilising U.S. defence articles and services transferred from the U.S. to Taiwan.”

The U.S. has not had an “enduring” military force in Taiwan since 1979, just after it recognized the PRC. That such a proposal is even being discussed in the corridors of power in Washington suggests dark days lie ahead.