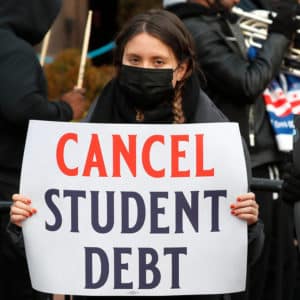 The entire student loan program amounts to loan sharking. Forty-five million people owe $1.7 trillion. Every cent should be wiped off the books.

The compound interest collected by the banksters is strangling millions. People in their fifties and older are still trying to pay off their loans.

That didn’t prevent The Wall Street Journal from denouncing it as a “coup.” Trying to get blood out of a stone has always been a capitalist specialty.

Biden was forced to act despite his rotten record in Congress. As a senator from the State of DuPont ― also known as Delaware ― he helped push through the misnamed 2005 “Bankruptcy Abuse Prevention and Consumer Protection Act.”

It prohibited anyone from getting their student loan debt wiped clean by filing bankruptcy.

Also rooting for this bill were the plastic loan sharks. Delaware is the country’s credit card capital because it allows these outfits to charge the highest interest rates.

As Trump bragged to CBS News anchor Norah O’Donnell, “I’m the king of debt.” He claimed to have told his lenders, “I’m going to give you back half.”

When has any member of Trump’s family been engaged in hard work?

Possibly more repulsive was Indiana Rep. Jim Banks. He responded to the news by tweeting, “Student loan forgiveness undermines one of our military’s greatest recruitment tools at a time of dangerously low enlistments.”

According to Banks, poor people should be cannon fodder for Big Oil instead of going to college.

One of the biggest reasons for the huge student debt is skyrocketing tuition. Capitalists don’t want poor people in college.

The City University of New York was free for more than a century when its enrollment was more than 90% white. Now when a majority of its students are people of color, tuition is $7,510 per semester.

The University of California system has increased tuition 20 times since the 1970s.

Nobody in socialist Cuba has to pay tuition or medical bills. Education and health care are considered to be human rights in Cuba.

Meanwhile, medical debts are the biggest reason for personal bankruptcies in the United States. People fighting cancer or other diseases shouldn’t have to worry about whether they can pay both their hospital and landlord.

For thousands of years, moneylenders have been ripping-off poor people. Many of the class struggles in the ancient world were between creditors and debtors.

In societies divided between rich and poor, agriculture has been intertwined with money lending for thousands of years. The whole nature of farming — where months separate harvests — puts the agricultural producer at the mercy of the usurer.

Almost 3,800 years ago in Babylon (not the town on Long Island, New York), the Code of Hammurabi had to protect farmers from greedy moneylenders. It proclaimed if a “storm wipes out the grain or the harvest fails, or the grain does not grow for lack of water, in that year he need not give his creditor any grain in payment.”

In the Bible, Deuteronomy 15 proclaims, “At the end of every seven years, you must cancel debts.” That’s a good program today.

The laws of Solon were an attempt to resolve this conflict in Athens over 2,500 years ago.

A debtors’ revolt occurred in Rome during the very first years of the republic. The Roman historian Livy wrote about how this led within two years to the “secession of the plebeians.”

The plebeians left the city and camped out on the “sacred mount.” It may have been the first recorded general strike in history.

The “secession” only ended when the wealthy patricians agreed to the appointment of “tribunes of the people,” which had a veto over the consuls.

We need thousands of people’s tribunes to tell the banksters to go to hell. We’ll make the banks pay reparations and cancel the student loans.