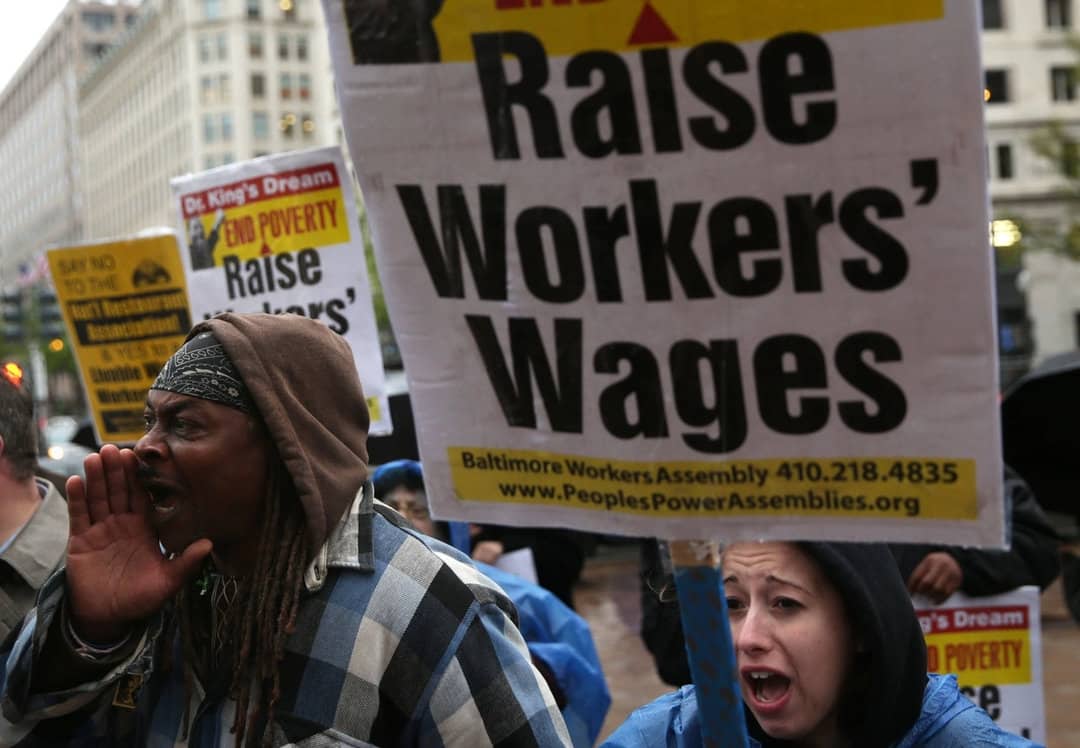 Today the federal minimum wage is $7.25! Let that sad fact sink in. Right now you can barely buy a gallon of gas in some parts of the country with that little cash.

July 24 will mark the anniversary of the last increase that took place in 2009. In 13 years the capitalist government in the United States has not raised the minimum wage even a nickel. And this is in the wealthiest country in the world. Well, wealthiest for the wealthy!

Labor Department data for 2021 shows that approximately 250,000 people still earned $7.25 and, to add insult to injury, domestic, farm, student, disabled, and restaurant workers can be paid less than $7.25 an hour. It’s called a “subminimum wage” — it’s legal and it implies that these workers are considered subhuman by their bosses.

The majority of low wage workers are Black, Brown, immigrant, women and young.

It is such a disgrace that some states and local municipalities have been forced to pass minimum wage increases on their own — but only as a result of concerted struggle by groups like “Fight for $15,” labor unions and community groups.

But still close to 52 million workers — 32% of the workforce — earn less than $15. And when you factor in the large number of workers who can only find part-time work, or do gig work, the situation is even more dire.

A September 2021 broadcast on CBS Money Watch reports that the “minimum wage would be $26 an hour if it had grown in line with productivity.”

What the broadcast says in plain language is that workers are working themselves to death, producing more and more — utilizing productivity-boosting technology — and killing themselves on the job.

Workers have “been more industrious,” in the words of CBS, making bosses’ profits soar.

On top of this, today’s inflation that continues to spiral upward has wiped away wages for all workers across the board. Wages were down 2.7% in April and are down much more than that in July.

So it is no wonder that workers and their organizations have begun to demand a minimum wage of $25. In the case of Amazon workers, the Amazon Labor Union is demanding a $30 minimum from the $191 billion Bezos.

What did Karl Marx have to say about wages?

Karl Marx spent his entire life writing and explaining the inner workings of the capitalist system and the development of human history. Along with colleagues, Marx participated in the workers movement of the time and was forced to live in exile.

You could say Marx, who was impoverished and reviled by the ruling classes of that time, also worked himself to death. He drove himself tirelessly not under the direct whip of a capitalist boss, but in the service of emancipating the working class.

So what did he explain in a meticulous and scientific way that earned him the hatred of the industrialists, landlords, bankers and capitalist class?

He revealed how wages and prices were determined, what surplus value is and how profit is derived.

There is a pamphlet, “Value, Price and Profit,”  that was presented first as an address at a gathering of the leading workers’ organization at that time that sums up some of the more detailed analysis in “Capital.”

It’s amazing that at that time Marx was responding to some of the same arguments heard today against raising wages. But it’s true. “Value, Price and Profit” starts with a presentation of Marx’s response to trade unionist John Weston who claimed that raising wages would be harmful to workers, causing inflation. Weston’s views at the time were supported by John Stuart Mill.

It wasn’t the individual Weston but rather his ideas that Marx argued with.

Karl Marx explained that raising wages will not automatically lead to higher prices. The only outcome of a rise in wages is a decline in profits. There is no reason for prices to increase.

However, there is almost nothing that a capitalist boss won’t do to make profit. It is not an individual thing, but built into the system.  And so herein lies the heart of  why there is so much propaganda about raising wages — that it will cause inflation, unemployment, and an endless list of disasters. The mere thought of declining profits causes terror.

So you might say that what Karl Marx described was wage theft, but only on a broader scale — meaning the entire system is predicated on ripping off the working class and that the real relations between bosses and workers is one of wage slavery.

Conclusion: We need to fight for every penny we can get and more. Let’s raise the minimum wage to $25 or even $30 an hour.  But, as Karl Marx proclaimed, the ultimate solution is to do away with wage slavery totally and build socialism.