The 14th National Al-Awda Conference at The People’s Forum in New York from May 6-8, 2022 was a three-day long weekend  of intensive discussion and strategy aimed at advancing the Palestinian struggle for liberation from zionist supremacy and colonization. As renowned artist Samia Halaby noted, “If we want peace, we must work to dismantle Israel,” a sentiment shared by Lamis Deek, who identified the return of Palestinian refugees and the dismantling of zionist colonization as a critical step toward removling a key cog in the global war machine and western imperialism. The conference also hosted Palestinian artists, film screenings, and convened community to strengthen bonds and cross-sector support and coordination. 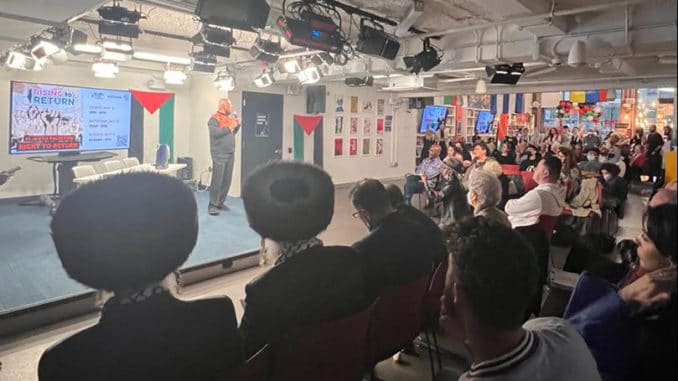 The keynote speakers expressed confidence in the liberation of Palestine. One academician stressed that there is no technical or military superiority that can defeat the Palestinian struggle for liberation, while noting the need for a paradigm shift as offered and adopted at the Al Awda Conference. Speakers stressed the need to revive indigenous knowledge and practices, to engage in critical inquiry and investigations, and to build active strategic solidarity networks (vertical and horizontal, especially outside the US). Speakers also addressed the need to recenter Palestinian self-determination in the Palestinian and solidarity movements, with Palestinian author and journalist Ramzy Baroud detailing the “super-structure” of Palestinian culture itself as playing a decisive role in Palestinian survival, resistance and victories — big and small. Raja Abdulhaq also addressed the need to discursively embrace Palestinian Muslim and Muslim culture as a needed tactic against the violent, islamophobic rhetoric advancing the judaization of Palestine’s Christian and Muslim communities and institutions.

The conference’s three tracks — “implementing return”; “from zionist accountability to enhanced Palestinian support and resistance”; and “strategic coordination” — were dedicated to each aspect of the work required to meet this primary goal.

On the implementing return track, discussants and attendees considered prior global efforts to break the siege on Gaza — and delegations generally — as a paradigm for developing return and reunification support convoys to implement UN Resolution 194, which calls for the safe and immediate return of Palestinian refugees, and which “israel” has violently breached and never honored since agreeing to its implementation in 1948. Discussants also began consideration of US and global political advocacy campaigns for return, so as to recenter return in all Palestinian liberation efforts. Discussants in this and other tracks also reviewed and assesed needed support to facilitate independent Palestinian efforts to return and reenter Palestine safe from zionist privacy invasions, interrogations, and threats to their families.

The conference’s second track was dedicated to identifying and holding accountable zionist organizations in the US which mobilize human and financial resources to colonization and violence in Palestine, in order to launch campaigns to dismantle, defund, and disempower these criminal organizations. Shortly after the conference, the US government, by way of this “democratic” administration, legalized a Jewish terrorist organization, the Kach Group, which is tied to murder and home invasion operations against Palestinians. Discussants at the conference identified several key zionist actors and organizations around which to launch multi-tiered campaigns in the coming months — and investigative partnerships to identify US citizens involved in prosecutable actions in Palestine. Reciprocally, discussants on this track also considered strategies to increase Palestinian access to resources, to allow them to withstand and preempt the escalating violent zionist colonization by the zionist regime and its settler agents. In this regard discussants addressed the need to reframe zionist and western demonization and criminalization of the Palestinian right to life and self-defense, and to launch discursive and material strategies globally to mobilize for Palestinian defense resources. Simultaneously the conference addressed the need to rebuild Palestinian self-sustainability and to move away from the imposed NGO dependency, so as to build sovereign economies of resistance and sumoud. Palestinian organizations, in coordination with Al Awda, will be launching mechanisms to allow for borderless economies in the coming months.

Recognizing the central need to continue empowering youth and student organizing for Palestinian liberation, the third track considered strengths, weaknesses and needs of the student and youth organizers. Discussants considered challenges faced by youth and student organizers,and academics, concluding that strong offensive strategies in dealing with school and campus administrations were more effective than defensive postures- especially when joined by community, intergenerational, and cross-sector organizing. Students requested detailed materials in this regard, and for other challenges, while discussants offered tactics and potential, and tested, avenues for successful organizing. The Campus to Community sessions stressed the need to confront and remove racist, anti-Palestinian examination questions and curriculum, and the murky administrative recourse process in the public school system. Al Awda NY will be releasing support resources and manuals addressing these issues, along with policy manuals. 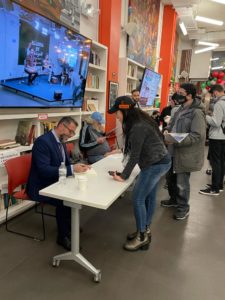 In sync with the global shift toward cyber/electronic war, the conference dedicated substantial time to addressing the global zionist surveillance, social media and IT war on Palestinians. Experts described the “israeli” surveillance system against Palestinians as a panopticon system: a constant all-consuming surveillance and information gathering system aimed at exacting near-total control and intimidation of Palestinians inside and outside Palestine, with the US government a willing collaborator and facilitator of such illegal practices. Discussants assessed US and western based companies’ adoption of policies of digital discrimination against Palestinians under pressure from US and “israeli” forces, in both the banking and social media arenas. Experts shared strategies to defend against and preempt zionist electronic repression of Palestinians and Palestinian advocacy — and ways to seek accountability for zionist incitement to violence in these arenas. They also discussed the need to expose the relationships between zionists, weapons manufacturers, and social media/media outlets as key to confronting and exposing these practices. Social and alternative media experts covered best practices and tactics to expose and bypass zionist narratives and media dominance. Building from these discussions, their own strategies developed over the years, and expert information, Al Awda NY will be releasing resources addressing this aspect of the struggle as well.

The conference also addressed the recent lack of central coordination to support Palestinian prisoners and targets. Survivors and targets of “israeli” imprisonment shared their experiences and called for more meaningful coordination, including boycotting and shutting down the corporations engaged in prison building and services, and delegitimizing the legal and political framework that sustain the zionist colonial prison system — while supporting and coordinating with legal institutions doing this work in Palestine.

As the Jewish anti-Zionist community grows, the founders of organizations doing the earliest work in this regard convened a space to discuss strategies for Jews to build community and actions to support their work — with several tactics proposed and in continued development, including strategies to confront Kahanists, documenting and exposing Zionists, and pushing back against the weaponized manipulation of anti-Semitism.

Across the board, for all efforts, and particularly through a hard-hitting panel on electoral activism, the conference presentors and attendees were in consensus that building horizontal power must be the main goal, while a smaller segment should be engaging in vertical organizing as well — provided that such vertical government advocacy does not compromise the Palestinian demand for full liberation, return, and reparations. 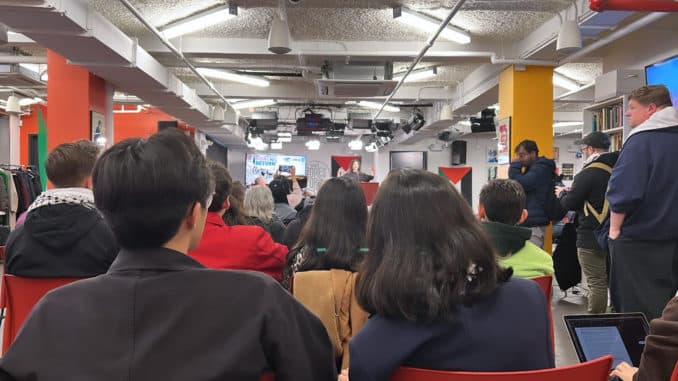 Keynote speakers underscored the class nature of the war of colonization and incremental genocide in Palestine, and that racial capitalism is at the heart of the struggle of all oppressed people, inside and outside the US. Councilman Charles Barron, Black liberation activist-attorney Roger Wareham, and New England American Indian organizer Jean-Luc Pierite stressed the need for solidarity against a common enemy and common practices which have stolen land, environmental integrity, and safety from Black, Indigenous, and Palestinian people.

To that end, the conference launched a coalition dedicated to self-determination and liberation of oppressed people — to be led by Black and people of color organizations committed to racial and socioeconomic justice, and to work in support of those fighting against US and western imperialism. The coalition infrastructure is under development and will go public in a few weeks.

Al Awda NY which crafted and hosted the program and its tracks has been at the forefront of advancing the Palestinian struggle for liberation for over 23 years, and has been dedicated to redistributing power to oppressed communities and struggles since then.

As we plan to advance the work of our conference in an era of escalated need, we request your help and support. We have set an ambitious goal to raise $125,000 for unpaid costs from the conference, and to hire staff, secure equipment, and to launch digital and material work detailed above.

This amount would cover outstanding conference costs for venue, speaker travel and hotel expenses, youth, travel expenses and food. $31,000 is needed to cover the money spent to develop and launch the Conference micro-site and related publicity, and to go towards video editing and publication  of the conference plenary sessions in consumable format. With the balance we hope to hire a program coordinator and use the funds to build our electronic assets, launch and make accessible the above listed programs and materials, along with centralizing and digitizing 23 years of Palestine organizing in NY, to provide legal and political support to students, parents and communities in need of support,  and to cover costs of trainings and materials for the coming two years- to ensure that the paradigm shifting work devised at the conference is implemented and that the movement for Palestinian liberation steadily proceeds.

You can donate via:

Our deepest thanks and ongoing commitment to justice and liberation, eternally.