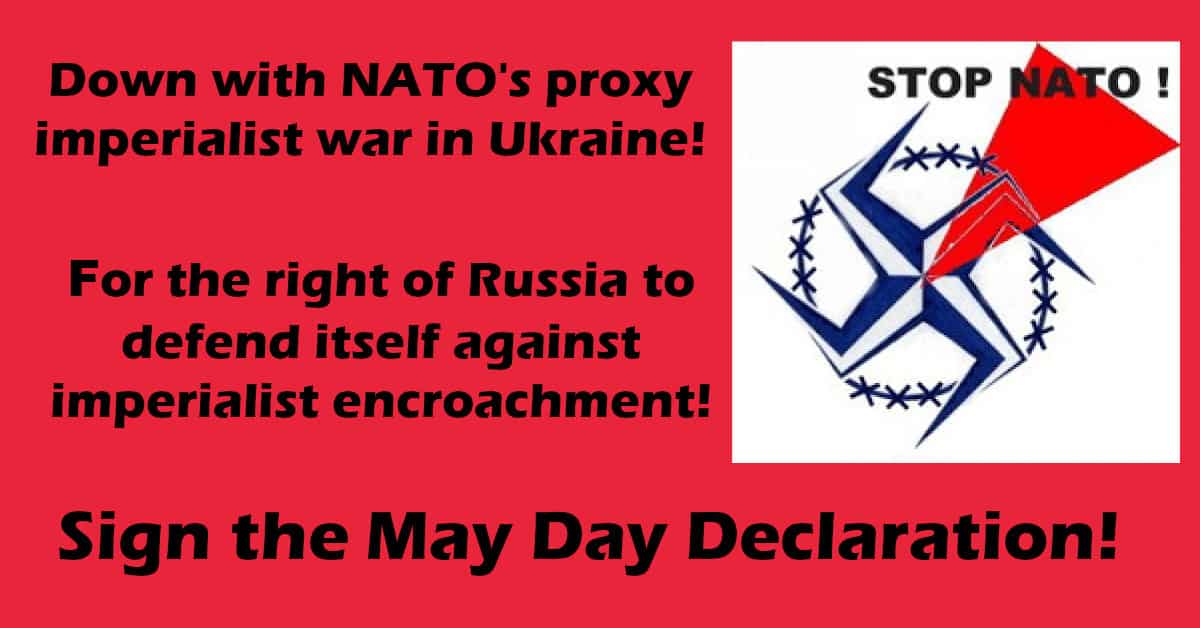 Open letter for May Day

On May Day, the international day of solidarity of the workers of the world, the following groups and individuals proclaim our united opposition to the greatest threat to the global working class: imperialist war. We declare our refusal to accommodate ourselves to the war drive of world imperialism against Russia. We hoist on our banners today the following:

Those on the left who seek to emulate the propaganda of the ruling class by reducing this global conflict to a national struggle for Ukrainian “self-determination” ignore the following:

Although Russia has been a capitalist state since 1991, it is not an imperialist power in its own right. Imperialism is more than when one state employs military force against another. Imperialism is a stage of capitalism represented by the dominance of finance capital. Russia is not part of the “imperialist club” but a relatively backward, dependent capitalist economy.

The military operation of Russia in Ukraine is a desperate effort to stop it from being used as a spearhead in the long held plans of western imperialism to turn Russia into a semi-colony to loot its vast internal resources. Ukraine’s integration into the NATO war machine was well advanced before Russia launched its defensive military operation. Russia faced the prospect of its entire western border becoming part of the NATO alliance and a staging ground for the deployment of advanced weaponry, including nuclear weapons, missile defense systems and troops aimed squarely at Russia.

The 2014 Maidan coup, led by fascist shock troops on the ground and guided by U.S. imperialism, installed an effective puppet government in Kiev. Since the coup, this government has not only been a direct tool of U.S. imperialism, but has violently suppressed all leftists, ethnic Russians and other minorities. The repression provoked a bloody civil war in Ukraine as residents of the Donbass established the People’s Republics of Donetsk and Lugansk to defend themselves from the violently Russophobic Kiev regime and its fascist attack dogs.

This is why we reject the policy of “revolutionary defeatism” being advocated by many centrist Marxist tendencies. It is not enough to just oppose NATO intervention in Ukraine. Opposition to imperialism means extending support to those directly in its crosshairs. This means offering support to both the People’s Republics of Donetsk and Lugansk and to the Russian state. Russia has the right to defend its sovereignty by military force against imperialism’s proxy war.

We are also committed to the genuine independence of Ukraine. However, this cannot be achieved under the aegis of an imperialist war alliance that is using Ukraine as a pawn.

We oppose the proxy war in Ukraine because it is part of imperialism’s drive to World War 3.  The efforts to subordinate Russia through sanctions, war and regime change, are part of U.S. imperialism’s ever more reckless efforts to maintain its global hegemony and reverse its economic decline against both its imperialist rivals in Europe and rising China. The rivalries are fuelled by the ongoing capitalist economic crisis deepened by the COVID-19 pandemic. A NATO victory in Ukraine would not lead to peace but only advance imperialism’s war plans against China.

A war between NATO and its allies against either Russia or China risks wiping out billions of lives in a nuclear war and unleashing horrors that would dwarf the worst infernos of the 20th century.

On May Day we recommit ourselves not only to resistance to imperialism but to building an independent movement of the working class internationally to overthrow capitalism through world socialist revolution. The signing and sharing of this statement on May Day is aimed at starting to rebuild concrete links between the genuinely anti-imperialist Marxist forces as part of this process.

Workers of the world unite!

To sign the letter please send an email to: ClassConscious@protonmail.com or emancipacaotrabalho@gmail.com.