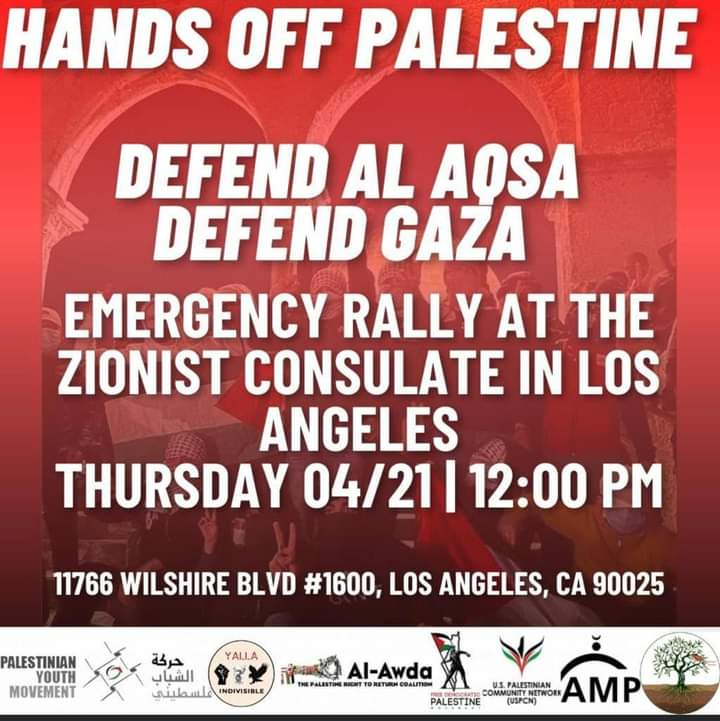 Join us THIS THURSDAY 4/21 at the Zionist consulate at 12 PM for an Emergency Rally as we demand an end to escalating Zionist violence across all of Palestine and an end to the ongoing Nakba.

Over the past few days, Palestinian worshippers in the Al-Aqsa mosque have been repeatedly ambushed by the Zionist Occupation Forces. The IOF have used sound grenades, fired tear gas, detained the youth, and brutally attacked worshippers, leaving several injured and the mosque in poor condition. In Gaza, Zionist warplanes have dropped bombs around Khan Yunis and remain in the skies threatening further aggression.

For Zionist aggression to end and for our liberation to be realized, nothing short of the full eradication of Zionism is required. Join us as we send this clear and unwavering message to the Zionist regime in front of the consulate at 11766 Wilshire Boulevard #1600, Los Angeles. The rally will begin promptly at noon. We look forward to seeing you there!