As the U.S. and its NATO satellites flood weapons into Ukraine, NATO is being “transformed” into a fighting force capable of direct wars on Russia and China, says NATO General-Secretary Jens Stoltenberg.

NATO formally launched a 40,000-strong rapid response force targeting Russia in February. This was in addition to the 175,000 NATO troops already on Russia’s border.

In an interview with the Telegraph, Stoltenberg said NATO is in the process of making a “fundamental” shift from engaging in what he called “tripwire deterrence” to “be transformed into a major force capable of” direct warfare.

Stoltenberg made clear that China is as much a target as Russia. “We are finalizing the work on the new strategic concept that will be agreed at the NATO summit in June. … And there, I expect China to be an important part.”

Stoltenberg adds: “It is also of concern that we see that Russia and China are working more and more closely together.”

Since 2014, Stoltenberg said, “We have implemented the biggest reinforcement of NATO since the end of the Cold War.”

Following the overturn of the Soviet Union, NATO has expanded from 16 countries to 30. NATO expansion technically means that the member-nation’s armed forces are “integrated” into the NATO military command. NATO takes command, with the U.S. dominating. No NATO member-state can act without U.S. approval. 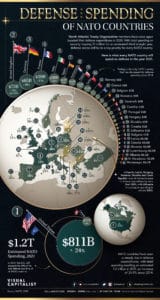 For the last two decades, NATO has been expanding into Eastern Europe. In 1999, NATO took in the Czech Republic, Hungary and Poland. In 2004, Bulgaria, Estonia, Latvia, Lithuania, Romania, Slovakia and Slovenia were incorporated. In 2009, Albania and Croatia. In 2017, Montenegro. In 2020, North Macedonia.

Finland and Sweden are reported to be “within weeks” of deciding to join NATO.

Meanwhile, the U.S. is expanding its proxy war in Ukraine, as Leon Panetta, who was CIA director and then secretary of defense in the Barack Obama administration, so clearly put it. The United States and its NATO military operation is in a proxy war against Russia, with Ukraine as the battlefield. The U.S. role, Panetta said, is to provide more and more weapons faster and faster with Ukraine doing the fighting, bolstered by foreign mercenaries.

It’s a matter of military fact that in the Ukrainian proxy war, more military-technical assistance has been dispatched by the U.S. and its NATO satellites, in a larger amount and in a shorter time, than in any previous military conflict in history.

The Post says: “Russia this week sent a formal diplomatic note to the United States warning that U.S. and NATO shipments of the ‘most sensitive’ weapons systems to Ukraine were ‘adding fuel’ to the conflict there and could bring ‘unpredictable consequences.’”

The diplomatic note, titled “On Russia’s concerns in the context of massive supplies of weapons and military equipment to the Kiev regime,” was forwarded to the State Department by the Russian Embassy in Washington. In it, Russia accuses NATO of trying to “pressure Ukraine to abandon peace negotiations with Russia in order to continue the bloodshed.”

The U.S. has sent more than $2.6 billion worth of arms and other military aid to Ukraine since Russia launched its military action in February. The Pentagon explained, “The United States has now committed more than $3.2 billion in security assistance to Ukraine since the beginning of the Biden administration.”

As noted by the Pentagon, NATO is the primary force for U.S. dominance and control in Europe.

NATO was founded as a U.S.-led military alliance against the Soviet Union and the socialist countries in Eastern Europe. But it was more than that. After World War II, the United States was determined to bring all the imperialist countries under its military control — first the defeated Axis powers of Germany, Japan and Italy and then increasingly its “victorious allies,” Britain and France, through the NATO alliance.

At the end of the Cold War, the newly capitalist oppressed countries of Eastern Europe were signed up as formal NATO members. NATO has been in the process of unofficially taking in Ukraine — minus Crimea and the Donetsk and Lugansk People’s Republics.

Following the breakup of the Soviet Union, socialist industry was dismantled in Ukraine. Once the second-largest economy in the USSR, “independent” Ukraine is now the poorest country in Europe.

In 2013, the European Union demanded that Kiev impose Washington-based International Monetary Fund (IMF) controls, neoliberal structural adjustments, over all aspects of state spending and operations as the conditions required for membership in the European Union. Even more government assets were to be sold off. Ukrainian President Viktor Yanukovych rejected this for a more favorable offer from Russia.

The Euromaidan coup quickly followed in 2014, openly supported and financed by NATO, to put in a government that bowed to the IMF demands and made NATO membership a policy mandate. Ukrainian President Volodymyr Zelensky has repeatedly talked of Ukraine’s entrance into NATO. On Feb. 19, Zelensky demanded, once again, entry to NATO, saying, “Eight years ago, Ukrainians made their choice [the Euromaidan coup].”

The resistance to the Euromaidan coup and to NATO in Ukraine has been bigger and more widespread than reported in the U.S. corporate-controlled media. The resistance has been strongest in the eastern part of Ukraine, particularly the Donbass region. The autonomous Donetsk People’s Republic and Lugansk People’s Republic were created when the people there voted overwhelmingly (89% and 96%) against a NATO-controlled regime and to secede from the Kiev regime.

In Crimea a 2014 referendum rejected the Euromaidan coup. The result was a 97% vote in favor of the Autonomous Republic of Crimea seceding, with an 83% voter turnout.

This is exercising the right of self-determination. A NATO takeover of Ukraine is the opposite.