On March 31 — the International Transgender Day of Visibility — Baltimore Safe Haven reported that their Charles Village office had been vandalized with a bigoted message that read “Fuck Pride DIE.”

Founded in 2018, Baltimore Safe Haven is a local, trans-led nonprofit that provides the city’s at-risk TLGBQIA community — particularly Black trans women — with food, housing, health care and more. According to the organization’s website, their aim is to serve individuals “with an annual median income of less than $10,000, who are currently engaged in or have a history in sex work, who are substance users, and who are either homeless or at risk of becoming homeless.”

Key members of Safe Haven’s staff have expressed their outrage and frustration in the wake of this attack and the online harassment that has accompanied it. “We’re devastated. I’m afraid for my own safety and the safety of my staff at this moment,” remarked founder and executive director Iya Dammons. Case manager Nicole Wells was the first to notice the graffiti and shared a similar comment: “I was shaking. At this point, I don’t even want to go outside by myself.” Program Manager Ngaire Philip added, “We haven’t done anything to hurt anyone.”

Unfortunately this isn’t the first attack they’ve had to endure: last October, Safe Haven’s “Project Genesis” youth shelter in West Baltimore was burglarized and vandalized by a man who previously threatened staff and made “derogatory comments around sexuality and gender.” This time, Dammons believes the organization is being targeted due to the upcoming Baltimore Trans Pride ‘22 Block Party they are heading this June.

Despite these hardships Baltimore Safe Haven remains committed to their vision: “a world in which all transgender, lesbian, gay, bisexual, and queer (TLGBQ) people enjoy healthy, self-determined and -sufficient lives, liberated from the stigma, violence, and oppression they have suffered.”

“We all just had to take a breath for a second,” says Dammons, who then continued: “We’re not going to let this break us. We’re not going to bend. We’re going to do the job.” The vandalism is currently being investigated as a hate crime.

Baltimore’s Peoples Power Assembly previously marched alongside Baltimore Safe Haven in 2021 for their 2nd annual Black Trans Lives Matter march, and will continue to support the organization’s valiant struggle to uplift the most vulnerable members of our community.

Regarding the upcoming festivities Dammons said, “This is the first time we have ever thrown a major, big Pride like this for the trans community. I would like to see people come out on June 4 and let them know that this will not happen in Baltimore City at all.” 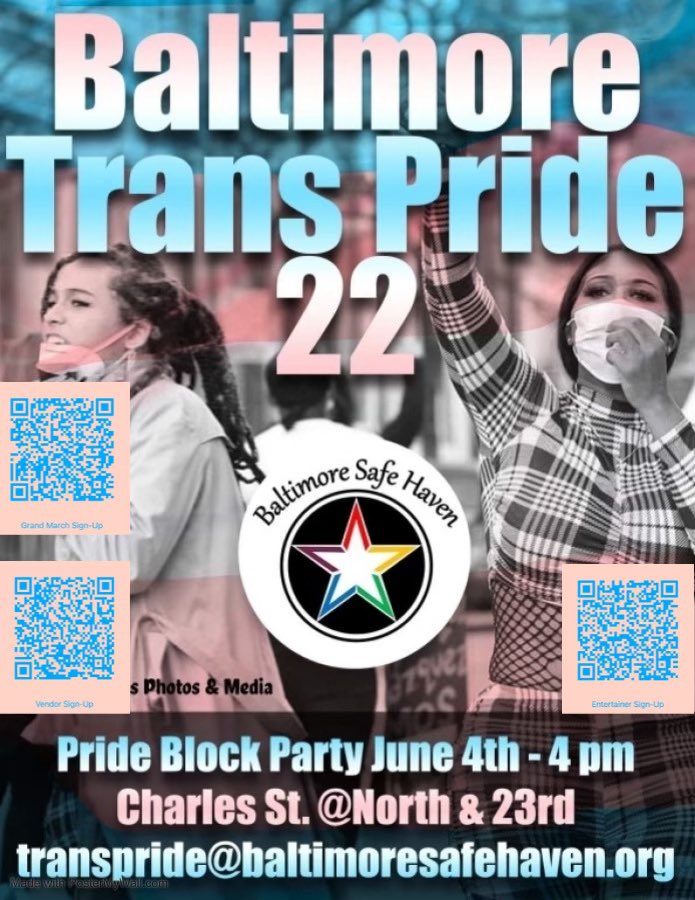