The first crack in the Amazon empire is officially opened! It came on April 1, when the Amazon Labor Union (ALU) won its election to represent the 8,000 warehouse workers at the JFK8 facility in Staten Island, New York.

We can’t help but think that bazillion-dollar boss Jeff Bezos – whose racist anti-union attorney had earlier declared in a leaked memo that Chris Smalls, the young Black rank-and-file leader of ALU, to be “not smart or articulate” – woke up with a giant headache that day.

On the other hand, news of the victory elated workers everywhere.

It has given confidence to workers in Amazon warehouses and facilities across the country. Chris Smalls, interim Amazon Labor Union president, has stated that the ALU has already heard from 50 warehouses interested in organizing.

In Maryland, warehouse workers who have been building a committee made plans to launch the Maryland Amazon Workers Union, based on the example of the ALU. The group has been distributing flyers to workers at bus stops.

The outcome of the BAmazon vote in Bessemer, Alabama has yet to be decided. But what is clear is that there was a dramatic gain for the union in this second election for union representation.

This time the difference is only 118 votes, 993 “against” to 875 “in favor.” And there are 416 contested ballots. While there is a slim chance that Retail, Wholesale and Department Store Union (RWDSU) will win representation, it’s not over yet.

Comparing Bessemer to Staten Island is like comparing apples and oranges. The Bessemer election took place in a “right to work” state (better known as a right to fire state).

Just 30 minutes away from the Bessemer warehouse, the mine workers from Warrior Met Coal have been on a strike now going into its second year. The mine workers have been heroically holding out in a battle that symbolizes not just 900 miners fighting for justice, but workers everywhere fighting against billion-dollar bosses who do not want to let go of even a crumb of their overblown profits.

Some of the miners have taken jobs at the Amazon warehouse and this tends to strengthen union consciousness. But there is contradictory pressure also. The fact that these workers have been fighting for so long, under dire economic conditions, compounds the fear Amazon bosses have spread.

In addition, the average wages in Alabama are far lower than Staten Island, which makes Amazon’s pay look attractive.

But the pay does not mitigate the grueling conditions inside Amazon or the lack of power workers have without representation.

Some key lessons of Staten Island

Many of us who have been in the trenches looking for ways to organize will be evaluating what worked and what didn’t at the Staten Island warehouse.

One clear fact that stands out is that the initiative and organizing was built by the workers themselves inside the warehouse.

Equally important is that the core organizers who took on this battle were representative of younger activists influenced by the Black Lives Matter movement. They spent time in the streets fighting police terror and other struggles against capitalism, including the development of mutual aid groups. Some of these workers consciously choose to take jobs at Amazon to help with organizing.

One thing that struck those of us from Baltimore who attended an ALU rally outside the Staten Island facility on March 20 was the care that ALU organizers had for fellow workers, similar to many grassroots community groups and assemblies.

The Amazon Labor Union assisted and worried about workers faced with health and family crises, memorialized and marked the deaths of workers, and took on successfully fighting sexual harrassment in the adjoining LDJ5 warehouse.

It is the example of this solidarity that is necessary to win struggles.

In terms of tactics, it is likely that there will not be a “one size fits all” solution to organizing Amazon. Workers will have to experiment – win, lose, or draw – and embrace each other in solidarity. It is the goal of building working-class power that must remain front and center.

We are sure that debates and discussions will continue. Certainly what’s considered the “mainstream” union movement will be important in the coming battles. Its resources and especially the members that they represent are incredibly important.

But it cannot and will not be the ultimate answer. The dynamic force of younger, more militant workers, who reject capitalism and worn-out models, and the engagement of the rank and file, will have to play the key role in reviving class struggle in this country. 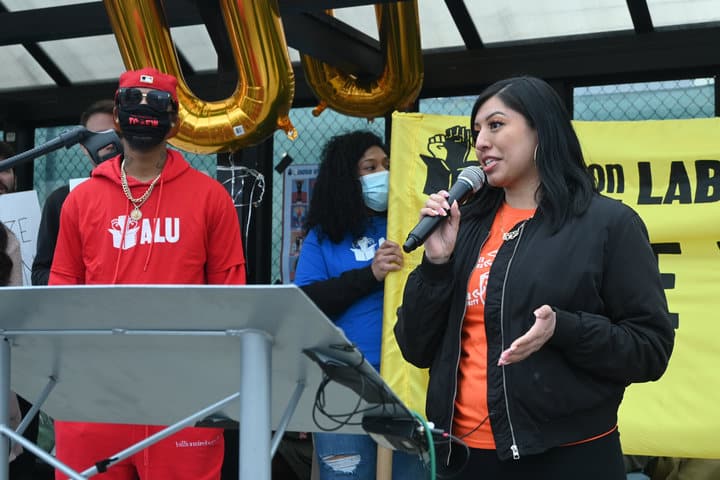 Will this mark a new stage of the labor movement?

We believe it will.

The pandemic has laid bare the deep and undeniable problems of capitalism. Bezos and his class of billionaire bosses and bankers have scored a windfall of profits on the backs of workers. These are the conditions that are propelling struggle.

We cannot forget that the Staten Island victory actually began with the walk-out of Amazon workers, led by Chris Smalls, against the callous disregard of the company for the health and well-being of workers during the early days of the COVID-19 pandemic.

This stunning fightback proves that the huge multinational, multi-gendered, multi-generation, multi-abled working class is just beginning to be heard, both in the workplace and the community. Everyone’s task is to join in and strengthen this movement.

Sharon Black is a former Amazon worker and author of the pamphlet “Amazon Worker Tells All,” available free to download.