Trans people, and especially youth, are under attack in state capitols across the U.S. And the most egregious attack so far has come in a state that is a stronghold of the neofascist takeover of the Republican Party – Texas.

On Feb. 17, Texas Attorney General Ken Paxton issued a “nonbinding opinion” that gender-affirming treatment for trans children and youth amounted to “child abuse.” Paxton’s outrageous claim came on the heels of the failure of a bill with similar language to advance in the state legislature.

The very next day, Gov. Greg Abbott issued an executive order giving Paxton’s “opinion” the weight of law, and ordering the Department of Family and Protective Services to begin investigating families and healthcare providers of trans children on suspicion of “child abuse.”

Abbott also ordered state employees – including teachers and health-care workers – to report any known trans children to DFPS or face firing and prosecution themselves.

Texas authorities immediately began an aggressive and very public campaign to threaten trans children’s families and health providers, including one mother who is herself an employee of the DFPS. She was placed on leave while an inquiry was opened into her 16-year-old’s case.

A judge temporarily halted the investigations on March 11 in response to a legal challenge brought by the family of a trans teenager. Abbott immediately appealed the decision.

Meanwhile, hospitals like UT Southwestern in Dallas have moved to end all gender-affirming care for trans children and youth, in the same way many public and private clinics and hospitals have ended reproductive services for women out of fear of being prosecuted (and losing profits) under Texas’ Draconian abortion ban that went into effect last year. 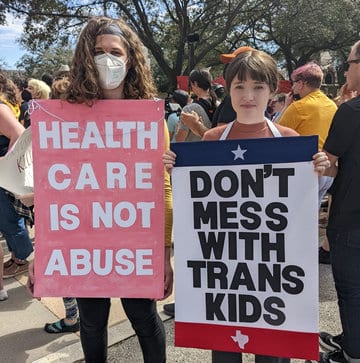 What happens in Texas

Texas has become ground zero for some of the most reactionary and divisive laws in the United States: against the voting rights of Black people, against women’s right to choose, against the right to teach a shred of truth about U.S. history – and now, against trans children and their families.

What happens in Texas doesn’t stay in Texas. It becomes a template for the far-right across the country, and helps to push the entire mainstream political ecosystem to the right – since spineless Democratic Party bosses respond to the desires of Wall Street, Big Oil and the military industry, rather than the people who vote for them.

A prime example is Oklahoma, where the state legislature is poised to enact an abortion ban similar to the one imposed in Texas last year. Like Texas, the Oklahoma measure “rewards” people for turning in their neighbors and healthcare providers.

NBC News reported March 20: “State lawmakers have proposed a record 238 bills that would limit the rights of LGBTQ Americans this year — or more than three per day — with about half of them targeting transgender people specifically.”

The transparent goal of these laws, piling one upon the other, is to divide and atomize the working class so that we cannot fight back as capitalists and their political agents drive up prices and drive down wages, erode union rights and terrorize communities of color.

To achieve their ends, these proponents of “traditional family values” are only too happy to sacrifice children and their families as they whip up hate and division.

Democrats like Joe Biden, who gave lip service to trans rights in his war-mongering State of the Union address, have proven over and over that they can’t be relied upon to do anything to protect people’s rights – just as they have done nothing serious to defend voting rights or the right to abortion.

We won’t go back!

Fortunately, people are fighting back. They’re taking to the streets, in Texas and elsewhere, to defend the rights of trans children and their families.

Hundreds of people converged on the governor’s mansion and state capitol in Austin March 13 for a protest called “Trans Children Cry for HELP!” The event was loud, colorful and militant, with families, activists, kids and elders united against Abbott’s attack.

“Kids wearing trans- and rainbow-pride flags as capes ran around under the warm afternoon sun, while adults held signs that proclaimed ‘this teacher will not comply’ and ‘Abbott is a useless clownish bully,’” the Dallas News reported.

“Tracy and Matt, a couple who declined to give their last name for fear of investigation, came to the rally from nearby Schertz to show support for their 12-year-old transgender son. ‘We came for our son, who was too scared,’ Tracy said.”

The protesters created a human wall to shield children and families from provocations by supporters of Alex Jones’ far-right “InfoWars” outfit.

Protests to defend trans children in Texas and everywhere must continue and grow. And the working-class movement must urgently take up the task of defending all the communities under attack by building a united fight-back movement that can sweep away the neo-Nazis and their enablers from Austin to Washington, D.C.