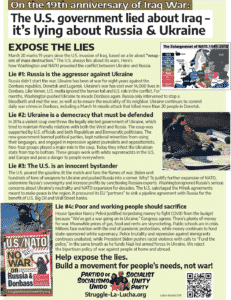 On the 19th anniversary of the Iraq War:
The U.S. government lied about Iraq – it’s lying about Russia & Ukraine
EXPOSE THE LIES

March 20 marks 19 years since the U.S. invasion of Iraq, based on a lie about “weapons of mass destruction.” The U.S. always lies about its wars. Here’s how Washington and NATO provoked the conflict between Ukraine and Russia.

Lie #1: Russia is the aggressor against Ukraine

Russia didn’t start the war. Ukraine has been at war for eight years against the Donbass republics, Donetsk and Lugansk. Ukraine’s war has cost over 14,000 lives in Donbass. Like Yemen, U.S. media ignored the human toll and U.S. role in the conflict. For months, Washington pushed Ukraine to invade Donbass again. Russia only intervened to stop a bloodbath and end the war, as well as to ensure the neutrality of its neighbor. Ukraine continues to commit daily war crimes in Donbass, including a March 14 missile attack that killed more than 20 people in Donetsk.

Lie #2: Ukraine is a democracy that must be defended

In 2014 a violent coup overthrew the legally elected government of Ukraine, which tried to maintain friendly relations with both the West and Russia. The coup was supported by U.S. officials and both Republican and Democratic politicians. The new government banned political parties, kept national minorities from using their languages, and engaged in repression against journalists and oppositionists. Neo-Nazi groups played a major role in the coup. Today they infest the Ukrainian state from top to bottom. These groups work with white supremacists in the U.S. and Europe and pose a danger to people everywhere.

Lie #3: The U.S. is an innocent bystander

The U.S. poured the gasoline, lit the match and fans the flames of war. Biden sent hundreds of tons of weapons to Ukraine and pushed Russia into a corner. Why? To justify further expansion of NATO, undermine Russia’s sovereignty and increase profits by sanctioning Russian exports. Washington ignored Russia’s serious concerns about Ukraine’s neutrality and NATO expansion for decades. The U.S. sabotaged the Minsk agreements meant to make peace in the region. It pressured its EU “partners” to sink a pipeline agreement with Russia for the benefit of U.S. Big Oil and Wall Street banks.

House Speaker Nancy Pelosi justified torpedoing money to fight COVID from the budget because “We’ve got a war going on in Ukraine.” Congress agrees: There’s plenty of money for war. Meanwhile prices of gas, food and rents are skyrocketing. Public schools are in crisis. Millions face eviction with the end of pandemic protections, while money continues to fund state-sponsored white supremacy. Police brutality and repression against immigrants continues unabated, while President Biden pushes racist violence with calls to “Fund the police,” in the same breath as he funds Nazi-led armed forces in Ukraine. We reject the bipartisan policy of war against people at home and abroad.

Help expose the lies. Build a movement for people’s needs, not war!