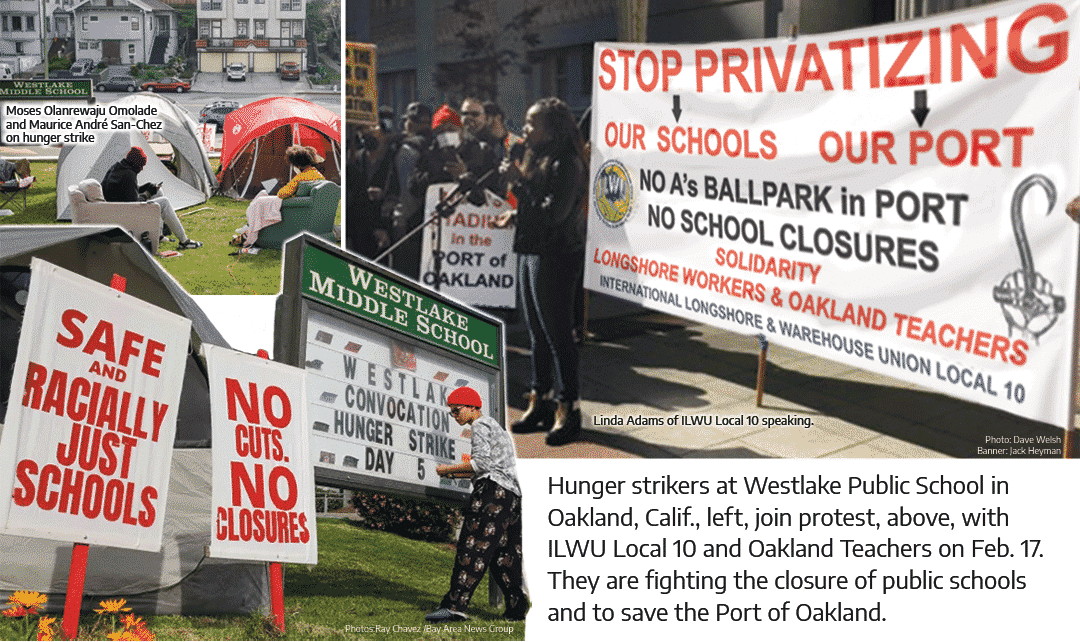 On Feb. 17, Struggle-La Lucha interviewed Clarence Thomas, a third-generation longshore worker, retired past secretary-treasurer of International Longshore and Warehouse Union (ILWU) Local 10 and author of “Mobilizing in Our Own Name: Million Worker March.” The book is about the struggles of ILWU Local 10, one of the most radical unions in the country and maybe the world. It is an anthology based on articles and interviews, photographs, and posters, with Thomas’ introductory analysis containing vital lessons for today’s labor movement.

Struggle-La Lucha: It’s great to be talking with you as Local 10 and the Oakland teachers, along with other labor and community activists, rally in Oscar Grant Plaza to stop the privatization of Howard Terminal and the closure of eleven Oakland schools.

Clarence Thomas: At present, the City Council of Oakland is voting to certify an Environmental Impact Report presented by John Fisher, owner of the Oakland A’s baseball team, in his quest to gentrify the Port of Oakland with a waterfront ballpark and development at Howard Terminal.

The Port of Oakland is the third busiest port on the West Coast, an economic engine for the entire region of northern California. ILWU Local 10 is the largest labor force at the Port of Oakland. It has a long militant labor history.

SLL: Why is the history of the ILWU Local 10 so important in this struggle?

CT: In the 1934 San Francisco General Strike, dock workers led by the legendary union leader Harry Bridges won control of the hiring hall and ended discriminatory hiring practices, known as the “shape-up.” During the following years, ILWU Local 10 — with African American leadership — became internationally recognized as one of the most democratic and radical trade unions in the U.S.

CT: Fisher wants to shut down Howard Terminal and replace it with a 35,000 seat ballpark; including 3,000 skybox condominiums for the wealthy, where you can watch a baseball game from your condo; a 400-room luxury hotel; and 1.8 million square feet of retail and commercial space.

Presently, there is no infrastructure for public traffic at all at the port. Two railroad lines run right in front of the Howard Terminal. One is for Amtrak, the other is for Union Pacific Railroad which at times carry hazardous material.

SLL: Who Is John Fisher?

CT: He is a right-wing billionaire, who owns the Oakland A’s, Gap clothing store, and is one of the major U.S. landowners. He is instrumental in many other gentrifying projects.

The reason why I’m emphasizing this is because the city of Oakland is in the midst of closing schools in predominantly African American and Brown communities. For the record, along with generations of ­other African American and working-class families, I have been the beneficiary of Oakland Unified School District. If we want to have real working-class democracy and not just bourgeois democracy, we need public schools. If a country does not invest in its youth, it has no future.

When they close public schools, it’s a precursor for charter schools. They are creating an environment where public schools can be converted into condominiums.

My father, Clarence C. Thomas, Sr., and his family were part of the great Black migration from Mississippi to Oakland, California, in 1936. He enrolled in Clawson Elementary School. For more than 20 years, Clawson elementary has been the site of upscale condominiums in Oakland. When I talk about the closure of schools — then the schools being converted into high-cost condominiums — it is based upon fact.

SLL: I see that Local 10 and the Oakland teachers have joined forces.

CT: There are currently two Oakland teachers at Westlake Middle School — Maurice André San-Chez and Moses Olanrewaju Omolade — who are on a 17-day hunger strike. These teachers are demanding that the state invest money in education and not in closing schools. They say they will end their hunger strike if California Gov. Gavin Newsom, the superintendent of the Oakland Unified School District, and the School Board members, meet with them.

Thus far, Oakland Mayor Libby Schaaf and Newsom have been very dismissive of the teachers’ demands.

Gov. Newsom wants to fashion himself as some kind of progressive. He had an opportunity to release many political prisoners from California state prisons, based on humanitarian release, because of the impact of the COVID-19 pandemic. He refused to do that.

We have to be very clear about whose interests the Democratic Party serves, which leads me to bring up the issue of how Democratic politicians claim to be friends of labor. They have been demonstrating that they are anything but.

First of all, I’d like to call attention to two prominent California politicians. One is Rob Bonta, who is currently the Attorney General for the State of California. Bonta played a major role in effectuating legislation that would allow the publicly owned Howard terminal, specifically designated for maritime use, to be used as a site for recreation and luxury housing. In his role as State Assemblyman, Bonta and State Senator Nancy Skinner have been working in collaboration to make Fisher’s gentrification plan possible.

Fisher is the stingiest baseball owner in Major League Baseball. This is not just hyperbole. During the pandemic last year he refused to pay the Oakland-Alameda County Coliseum Authority the rent on the property where the A’s currently play baseball. He said he had not been able to generate any money because of the pandemic. Yet he’s attempting to acquire some of the largest public space in the city of Oakland. He wants an amusement park for the rich at a thriving working port.

SLL: Will Oakland benefit in any way from Fisher’s proposal?

CT: No! The city of Oakland, like many major cities, is suffering from a lack of affordable housing. There is a growing population of people who are living on the streets and in parks. John Fisher is asking for a billion dollars from Oakland taxpayers to pay for infrastructure, on-site and off-site, for this development.

It’s important for people who will be reading this interview to understand how neoliberal policies are driving John Fisher’s efforts at the Port of Oakland. Neoliberalism is generally associated with economic policies including privatization, which is what is taking place at Howard Terminal and the closure of Oakland Public Schools.

SLL: Are other union leaders supporting Local 10 and the teachers?

What happens after the project is built? What jobs will be available to the working class in the city? Not the kind of jobs that will allow them to be able to rent apartments or buy homes.

Let me get to some specifics as to what this development would mean to port workers at the Port of Oakland. ILWU Local 10 is the only predominantly African American longshore union on the entire West Coast. Local 10 has a history of social justice, activism, and solidarity with the oppressed and the working class, at home and abroad.

ILWU Local 10 is one of the few places in the entire United States of America where Black people, specifically Black women and other women of color, can work and make the same amount of money as white men.

This development would curtail the future not only of ILWU members but also mitigate the capacity for the Port of Oakland in the midst of a pandemic. It is absolutely scandalous. The reason for this interview with you today is to be able to shed some light on it.

SLL: How did you become a member of ILWU Local 10?

Trent Willis, who just completed his second term as ILWU Local 10 President, is a third-generation longshore worker. His father went to work on the waterfront the same year as my dad.

Leo Robinson, the rank-and-file leader of ILWU who was responsible for writing the historic resolution calling for the boycott of South Africa’s apartheid cargo — also became a member of Local 10 in 1963.

I am mentioning this because it is so important to understand what the ILWU meant to people who reside in the Bay Area and the impact that they’ve made, not only in the Bay Area but across the country and around the world.

Former Oakland mayor and U.S. Congress member Ronald V. Dellums, whose father was a longshore worker, attended Westlake Middle School where the teachers are currently on a hunger strike. Rep. Dellums played a critical role in Congress in advocating for sanctions against apartheid South Africa.

Dellums, Robinson, and I all graduated from Oakland Technical High School. It is not a coincidence that all of our social justice activism was in some way influenced by our fathers’ membership in ILWU Local 10, one of the most democratic and militant rank-and-file unions.

In conclusion, during the years when there has been turmoil in the fight to end segregation and apartheid in the U.S., those waterfront jobs have meant so much to many in the Bay Area, not only Black people but the entire working class.

The union jobs allowed dock workers in the community to buy homes, to send their children to college, even though some of those members had no higher education at all. It enabled them to effectuate political change in the Bay Area. When Nelson Mandela was released from prison and did a worldwide tour, he came to Oakland where the longshore workers had refused to unload South African cargo. Mandela spoke to thousands at the Oakland Coliseum where the Oakland A’s currently play baseball.