Before the planes can drop the bombs, capitalist newspapers and TV networks have to spread the lies. In 1898, U.S. banksters wanted to grab Puerto Rico, Cuba and the Philippines from Spain.

They used the explosion aboard the battleship USS Maine while it was docked in Havana to do so. Two hundred sixty sailors were killed. From coast-to-coast, newspapers ran headlines proclaiming “Remember the Maine!”

Within 10 weeks Congress declared war on Spain. Not until 1976 did U.S. Rear Admiral Hyman Rickover, as the head of an official inquiry, admit that the explosion was accidental and that Spain wasn’t responsible. Puerto Rico is still a U.S. colony.

In 1964, President Lyndon Johnson claimed Vietnamese PT boats attacked the U.S. naval vessels in the Gulf of Tonkin. This big lie was the excuse to step up bombing of Vietnam and Laos. Millions of people were killed in that dirty war, including 58,000 GIs.

Who can forget George W. Bush’s Big Lie that Iraq had weapons of mass destruction? The hundreds of thousands of Iraqi people whose family members were killed certainly can’t.

Now the target of war propaganda is the Russian Federation. An elected Ukrainian government was overthrown eight years ago with the assistance of fascist gangs. The 2014 coup was greased by $5 billion in U.S. payoffs since 1991.

The CIA was behind the Ukraine coup just as it pulled the strings in overthrowing Chile’s elected President Salvador Allende on Sept. 11, 1973. Communist organizations were outlawed in both Chile and Ukraine.

The Ukrainian regime even banned the singing of the revolutionary anthem “the Internationale,” which was which was written to commemorate the Paris Commune. Over 40 people were murdered when the House of Trade Unions in Odessa was set on fire by neo-Nazis.

This is the “democracy” that President Biden wants us to support. The man in the White House said nothing about 14,000 people being killed in the Donetsk and Lugansk People’s Republics by intense shelling by Ukraine.

The Russian intervention has helped rescue people in Donetsk and Lugansk. It’s aimed to prevent Ukraine from being a NATO base against Russia. Pentagon generals view the Russian Federation as six million square miles to be occupied by the U.S. 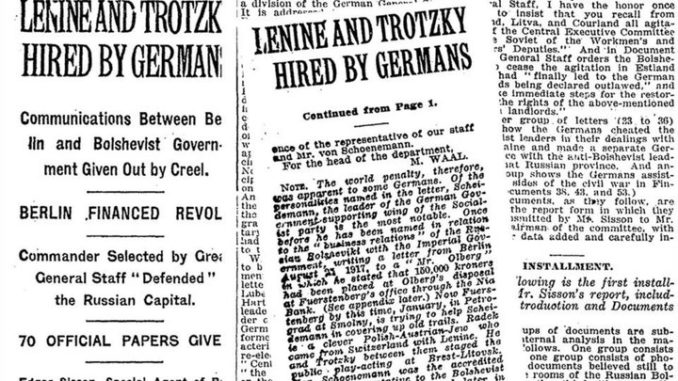 Lying in order to invade Russia

It’s not new for capitalist newspapers to lie about Russia. “Documents prove Lenine and Trotzky hired by Germans” was the New York Times’ front-page headline on Sept. 15, 1918.

The sensational article — first of a series — claimed Bolshevik leaders Vladimir Lenin and Leon Trotsky were “German agents” and “the Bolshevist revolution was arranged for by the German Great General Staff.”

According to the Times, the millions of people from dozens of nationalities that rose up in a socialist revolution, was just a conspiracy hatched by the German Kaiser. This is like John Birch Society members who claim the Black Lives Matter movement or the French Revolution are and were the result of conspiracies.

The 1918 Big Lie was based on 70 documents provided by U.S. government agent Edgar Sisson. The problem was the “Sisson Documents,” supposedly originating from different locations, were almost all typed on the same manual typewriter.

It was an obvious fraud that swiftly boomeranged. In the 1950s, retired U.S. Ambassador George Kennan — himself a Cold War architect — pronounced them forgeries.

Yet this fake news was used by President Woodrow Wilson to justify sending troops to occupy Arkhangelsk and Vladivostok in revolutionary Russia. That didn’t stop Seattle dock workers from smashing crates of rifles going to former Czarist Admiral Kolchak, who threw suspected Bolsheviks into the boilers of steam locomotives.

Less than two months after the “Sisson Documents” were published, German workers and sailors, inspired by the Bolshevik Revolution, overthrew the Kaiser.

The Soviet Union that resulted from the Bolshevik Revolution lifted up people from more than 100 nationalities. They established the world’s first and largest affirmative action programs that fought for equality.

Ukraine is a good example. Between 1915 and 1965, the number of students in Ukraine more than tripled to reach 8.5 million. In the same period the number of college students increased twenty times. (“National Languages in the USSR: Problems and Solutions” by M. I. Isayev.)

These students were taught primarily in Ukrainian. Compare that to the mission schools in the United States and Canada where Indigenous youth were beaten if they spoke their own languages. Many died.

Never forget that 27 million Soviet people, including millions of Ukrainians, died defeating Hitler. It was the Red Army that liberated Auschwitz on Jan. 27, 1945. One of the sheroes was the Ukrainian woman sniper Lyudmila Pavlichenko who killed 309 Nazis.

Tragically the Soviet Union was overthrown 30 years ago. Like Reconstruction’s bloody overthrow by the Ku Klux Klan, it was a defeat for all poor and working people.

While monuments to Confederate slave masters have been toppled by the Black Lives Matter movement, thousands of statues of revolutionaries and Red Army leaders have been destroyed in Ukraine. Meanwhile statues of the Nazi collaborator Stepan Bandera, whose followers slaughtered thousands of Jewish and Polish people, have been erected.

Eighty-one million people voted against Trump and racism in 2020. They didn’t vote for a war against the Russian Federation.

Our enemies are the landlords who are jacking-up rents by as much as 40%. President Biden isn’t able to defend voting rights but he’s threatening a new dangerous armed conflict with nuclear-armed Russia.

Hands off the Donetsk and Lugansk People’s Republics, and the Russian Federation!