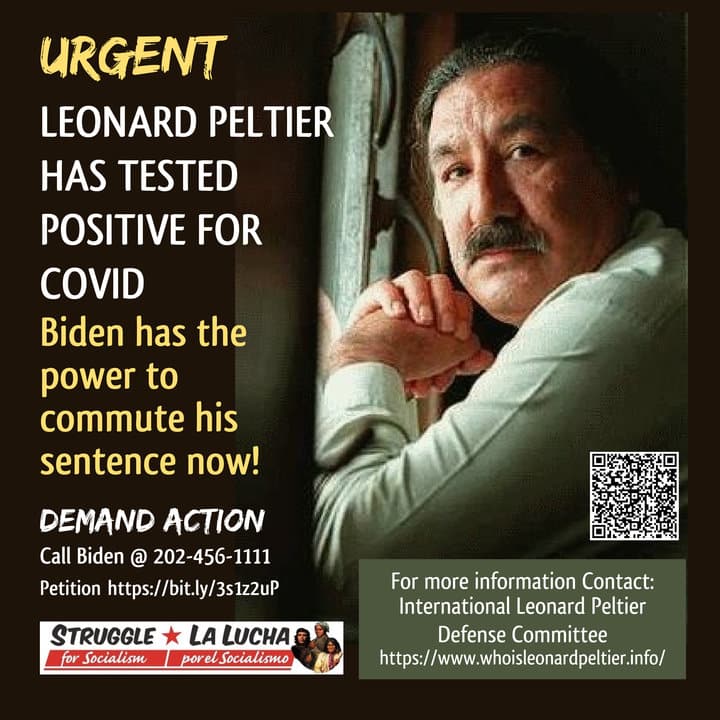 For 40 years, former American Indian Movement (AIM) activist Leonard Peltier has been in the clutches of the U.S. prison system –The Iron House of the whites, as indigenous people call them – on trumped up murder charges. Now, as he suffers poor health and an abdominal aortic aneurism, time is no longer on his side.

The aneurism, diagnosed just weeks ago, threatens his very life, so supporters of Leonard are demanding his freedom, so he doesn’t perish in the Iron House.

Decades ago, when Bill Clinton was president, he visited Pine Ridge, South Dakota (once Peltier’s home) and told people there: “Tell Leonard I won’t forget about him.”

A promise from Clinton proved as empty as any politician’s promise: gas, air, wind. (He musta forgot, huh?)

So Peltier languished in the Iron House as decades passed. He wrote. He painted – and he awaited white justice.

His supporters want people to write to the Bureau of Prisons (BOP), demanding his health care and release. The International Leonard Peltier Defense Committee needs you to write and call on Leonard’s behalf.

And while you’re at it, contact the White House and demand Leonard’s executive clemency.