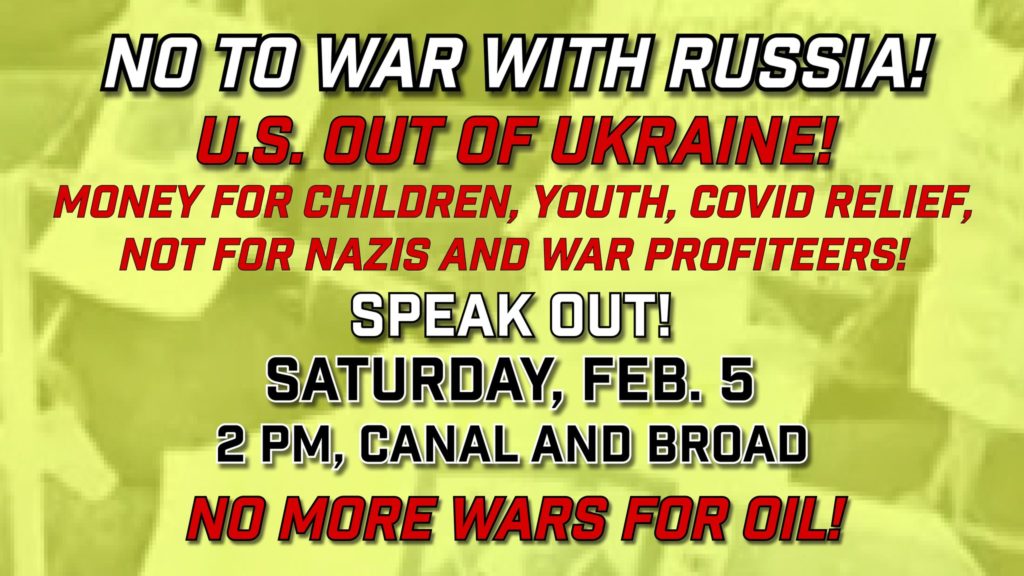 No to War with Russia!

A message from Andrey Kochetov, a labor leader in the Lugansk People’s Republic:

“Now the situation around our Republics is very serious. Ukraine brought to the front line about 125,000 soldiers of Ukrainian Army and murders from Nazi battalions. Many foreign instructors came to train Ukrainian soldiers.

“But mass media of US and EU says about “Russian aggression”. But we can’t see any Russian troops on our territory. We hope that common sense and wisdom will win and the world doesn’t fall into war.

“We still remember that Ukrainian authorities decided to drop bombs on the heads of Donbass residents instead of sitting down at the negotiating table. And we will never forget that only Russia, not so-called “civilized world”, gave us real help, support and defense.

“It is difficult to make any prognosis right now. We just see US push Ukraine into the war very hard. It is terrible but it is so!

“What you can do for us? Thanks to Russia we not suffer from hunger. Only one thing we need. Your support and help us dissemination of real information about the situation in our Republics.”

We Need Money For Workers Welfare, Not for Capitalist Warfare

The monthly child supplement has been cut and millions are facing eviction and foreclosure. Millions are denied childcare and affordable health care. COVID is overwhelming hospitals and killing people by the thousands. Republicans and Democrats have rushed to spend another $500 million on weapons to send to the Ukrainian army and its allied Nazi paramilitaries which have been terrorizing people. That $500 million is destined for the pockets of the U.S. military corporations which already make record profits and already loot 65% of our federal tax dollars for themselves.
Why is the U.S. in the Ukraine anyway?

Members of the Ukrainian National Guard flying NATO flag, the flag of the Azov battalion, and the Nazi swastika.

This is not about protecting people in the Ukraine. It is about profit and preparing for war with Russia. U.S. troops have been ordered to the Ukraine because the U.S. wants to build another military base on the Russian border. Imagine if Russia wanted to build a base on the Mexican border.

The corporate media outlets that falsely claim that the U.S. is defending Ukrainian sovereignty don’t mention that when Biden was Vice President, the U.S. orchestrated a fascist-led coup in 2014 that forced mass layoffs, price increases, cuts to social programs, and open terror on the Ukrainian people. Nor do they mention the $2.4 billion U.S. taxpayer dollars used to build up the swastika-flying militias of the Ukrainian National Guard who have killed more than 14,000 people in their 8-year bombing war on the Donbass in eastern Ukraine. These are the reasons that the people of the republics of Donetsk and Lugansk in the Donbass and the republic in Crimea are determined to be independent from Ukraine. Russia did not invade or seize Crimea; after the 2014 coup, the people voted overwhelmingly to disassociate from fascist Ukraine.

Solidarity with Anti-Fascist Fighters in Donbass and Ukraine

By now 150,000 U.S.-armed and -trained Ukrainian troops have amassed at the border of the People’s Republics of the Donbass located between Ukraine and Russia. They have been supplied with 250 tons of military equipment and ammunition (which corporate media has tried to hide in plain sight by calling it “lethal aid”) by the

U.S. They are reinforced by U.S./NATO deployed jets, warships, and nuclear-armed submarines.

By attempting to crush the anti-fascist resistance in the Donbass and advance U.S./NATO forces up to the Russian border, the U.S. is daring Russia to respond. Even the Ukrainian government has asked the U.S. to pull back but the capitalists in control of the U.S. and NATO have their eye on the vast energy reserves and infrastructure in the Donbass and Russia.

The U.S. government has declared that the world belongs to its capitalists and has 800 foreign military bases to enforce that ownership. Russia has a handful of bases in former Soviet states. Russia has adopted a defensive position by putting troops and military equipment on its own western border. The “imminent Russian invasion” being hyped by the corporate U.S. media is a lie being peddled on behalf of U.S. arms manufacturers and oil and gas companies hungry for new sources of profit, no different than the lies they told about WMDs in Iraq 20 years ago. By promoting this dangerous lie, they are pushing us to the edge of a catastrophic war.

Working people have no interest in another rich man’s war.

Join us in saying no more blood for oil!

Join us at Canal and Broad for a speak-out on Saturday, Feb. 5 2PM.