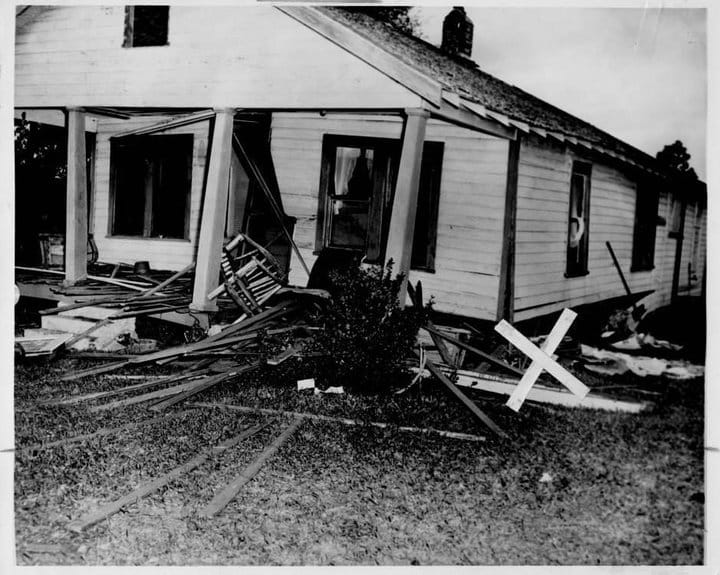 The Moore home after the bomb explosion Photo: Moore Cultural ComplexHarriette Moore and Harry T. Moore died for the right to vote. The Ku Klux Klan bombed their Mims, Florida, home on Christmas Day in 1951.

It was the couple’s 25th wedding anniversary. They left behind two daughters, Annie Moore and Evangeline Moore.

Harry Moore died on the way to the hospital while Harriette Moore died nine days later. Both had to be taken to a hospital 30 miles away in Sanford because the nearest hospital wouldn’t admit Black patients.

The Klan chose Christmas to bomb because that was the only day these two organizers and teachers would both be at home. As leader of the Florida NAACP, Harry Moore helped register more than 100,000 Black voters, more than in any other Southern state at the time.

No one was ever convicted of these foul murders. Nearby Orange County was so Klan-infested that the county sheriff was a member.

Medgar Evers was also murdered for the right to vote. The Mississippi NAACP field secretary was assassinated on June 12, 1963. Evers traveled constantly through Mississippi encouraging Black people to register to vote.

It took 30 years to bring the assassin, Byron De La Beckwith, to justice. At this murderer’s first trial, Mississippi Gov. Ross Barnett embraced Beckwith in the courtroom leading to a hung jury.

World War II veteran Maceo Snipes was the first Black person to vote in a primary election in Georgia’s Taylor County on July 17, 1946. He was named after the “Bronze Titan” who helped lead the Cuban wars of independence.

The next day four Klan members confronted Snipes while he was eating dinner with his mother. Snipes was shot in the back by Edward Cooper.

Snipes wasn’t operated on until six hours after he was wounded. He was denied a blood transfusion because the blood supply was segregated and the hospital didn’t have any “Black blood.”

As a result Maceo Snipes died on July 20, 1946. The coroner’s jury claimed Cooper was justified in killing Maceo Snipes.

A 17-year-old student at Morehouse College wrote a letter of protest to the Atlanta Journal-Constitution. His name was Martin Luther King, Jr.

Without struggle there is no progress

Seventy-five years after Maceo Snipes was murdered, the Georgia state legislature made it illegal to offer a chair or a glass of water to people waiting in line to vote, even if they were elderly or disabled.

What should be illegal are laws like these that try to prevent poor and working people from voting. Hundreds of laws are being railroaded through state capitols designed to deprive people of their voting rights.

All of them violate the U.S. Constitution’s 15th Amendment, which guarantees the right to vote. Don’t look to the U.S. Supreme Court to enforce it.

In 2013 a majority of the high court threw out a key enforcement provision of the Voting Rights Act in their Shelby v. Holder decision.

The 24th Amendment outlawed poll taxes. Yet the same court has upheld laws that often require money to purchase identification and are indeed taxes.

The right to vote was won on the battlefields of the Civil War and by the Reconstruction governments that followed. It was Black troops in the Union Army and the general strike of Black workers in the South that played the key role in defeating the slave masters’ confederacy.

The Reconstruction state governments, backed by Black voters, established the first public school systems in the South. These were the best governments poor white people ever had.

Thousands of people ― including Harriette Moore, Harry T. Moore, Medgar Evers, Maceo Snipes and Dr. King ― died for the right to vote. The drive to roll back voting rights is revenge for Trump’s defeat and the 26 million people who marched to declare Black Lives Matter!

As Frederick Douglass said, without struggle there is no progress. After 50 years of cutbacks, the pent-up anger of workers and poor people will defend their right to vote by any means necessary.