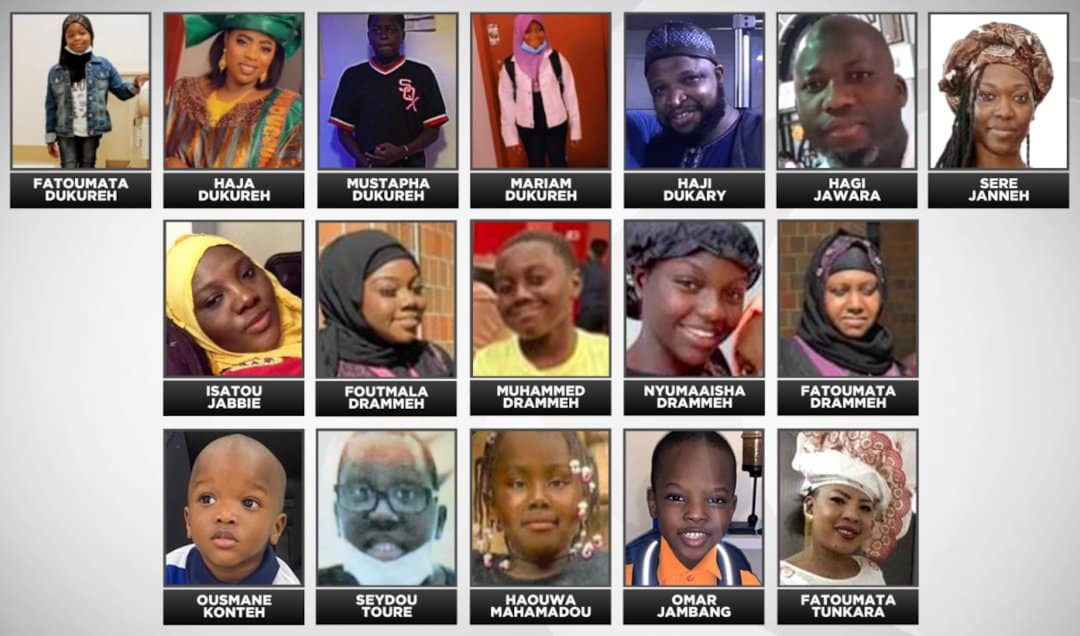 Seventeen people died in the Jan. 9 apartment building fire that broke out in the Bronx, New York. Eight of those killed were children.

Ousmane Konteh was just 2 years old when he perished. Haouwa Mahamadou was 5 when she died. Some survivors are fighting for their lives in hospitals.

The fire broke out in the 19-story Twin Parks North West tower at 333 E. 181st St. Many of the victims belonged to immigrant families from the West African country of Gambia. Families with roots in the Dominican Republic were also residents.

The country of Gambia was used by the British Empire as a source of enslaved Africans and then as a peanut plantation. Gambia and all Africans deserve reparations.

The entire Dukuray family perished. They were the mother Fatoumata, the father Haji, 12-year-old Mustapha, 11-year-old Miriam and 5-year-old Fatoumata.

Four members of the Drammeh family lost their lives. Muhammad Drammeh was killed one day after his 12th birthday. He died along with his mother, Fatoumata Drammeh, and his two sisters, Fatoumala Drammeh and Nyumaaisha Drammeh.

The fire apparently started when an electrical space heater plugged into an outlet caught fire. Families are forced to use space heaters because landlords don’t provide enough heat. That’s a crime.

Toxic smoke rose rapidly from a third-floor apartment, filling halls and stairways with poison. All of the people who died were killed by smoke inhalation.

The Twin Parks tower wasn’t ancient. It was built in 1972. Yet it didn’t have sprinklers or exterior fire escapes.

Lethal smoke rose in the tower because it’s lighter than air. More modern buildings raise the air pressure in the stairwells to keep out smoke. The newer structures also equip stairwells with dampers.

So why didn’t the Twin Parks tower have these life-saving features? It’s because the building was privately owned and making it safe would cut into the landlords’ profits. Many of the tenants paid their rent with Section 8 vouchers.

One of the owners is Rick Gropper, co-founder of the Camber Property Group. The outfit  bought Twin Parks in 2020 with other companies as part of a $166-million, eight-building deal. Gropper likes to pick up properties like Twin Parks with Section 8 tenants because it offers tax breaks.

They didn’t have to die

Following the tragedy, people throughout the New York City area and across the country have responded with sympathy and love. They have raised close to a million dollars for the families at the Twin Parks tower.

Meanwhile, Mayor Adams and television commentators initially gave lectures on the importance of closing doors if your apartment catches fire. The clear implication of the media barrage was to blame victims for their own deaths.

Adams did admit that “there may have been a maintenance issue with this door.” A year after a 2017 Bronx fire that killed 12 people, the city council passed a law ordering self-closing doors to be installed in all buildings by mid-2021.

The mayor even questioned the need for tenants to have space heaters, contending there were no outstanding heating complaints at the Twin Parks tower. There were actually four heating complaints filed by the tenants last year with the Department of Housing Preservation and Development.

Thousands of tenants in New York, including those living in New York Housing Authority buildings, are forced to have space heaters or boil water on their stoves to keep warm.

Another problem was that fire alarms would go off many times without cause, leading residents to ignore them. All these problems could have been fixed so 17 people didn’t have to die.

But that would have meant hiring more maintenance workers and cutting into Rick Gropper’s profits. Gropper may think of himself as a liberal who attends charity balls. But owning apartment houses for profit is a dangerous practice, just like privately owned nursing homes where tens of thousands have died of COVID.

Just to break even and pay the mortgage, landlords will have to cut back on repairs and maintenance workers. The result is a lack of heat, doors that don’t close and increased risk of fires.

Close to two hundred people marched on “billionaires’ row” in midtown Manhattan’s 57th Street on Jan. 12 to protest the ending of the New York statewide ban on evictions.

New York Gov. Kathy Hochul wants to celebrate Dr. Martin Luther King’s birthday this year by ending the moratorium on Jan. 15. Hochul said kind words for those who died in the Bronx, but sees nothing wrong with 250,000 families facing eviction in the middle of winter.

Marchers not only called out the governor, they also went to the headquarters of mega-landlords like LeFrak and BlackRock and condemned their crimes. People chanted in memory of the “Bronx 17.”

Housing is a human right. The power of the people will make it happen.