Jan. 8 – A hundred people marched today in New York City in sub-freezing temperatures to stop evictions. Landlords across New York State want to kick 250,000 families out of their homes.

“Housing is a human right, fight, fight, fight!” was a favorite chant. Speakers pointed out the impossibility of finding affordable housing in the capital of capitalism. Over half of the tenants in New York City pay half of their income for rent.

The current moratorium on evictions ends on Jan. 15. Landlords want to use Dr. Martin Luther King’s birthday to start throwing families’ furniture on the street.

New York Gov. Kathy Hochul doesn’t want to extend the moratorium. It was only because millions of people were in the street demanding Black Lives Matter that there was any ban on evictions during the pandemic.

Marchers demanded the moratorium be extended until June 30.

After a short rally, people marched to 26 Court St., home of some of the landlords’ favorite law firms. People then went over the Brooklyn Bridge with their colorful banners to Manhattan’s housing court.

Among the organizations that came out today were the Crown Heights Tenant Union, Democratic Socialists of America, the Party for Socialism and Liberation and the Socialist Unity Party.

The CHTU is joining other groups in calling for a “march on billionaires’ row” on Jan. 12 at 6 p.m. at 57th Street and Broadway in Manhattan.

Kicking people out of their homes in the winter can be a death sentence. Every attempted eviction has to be stopped. 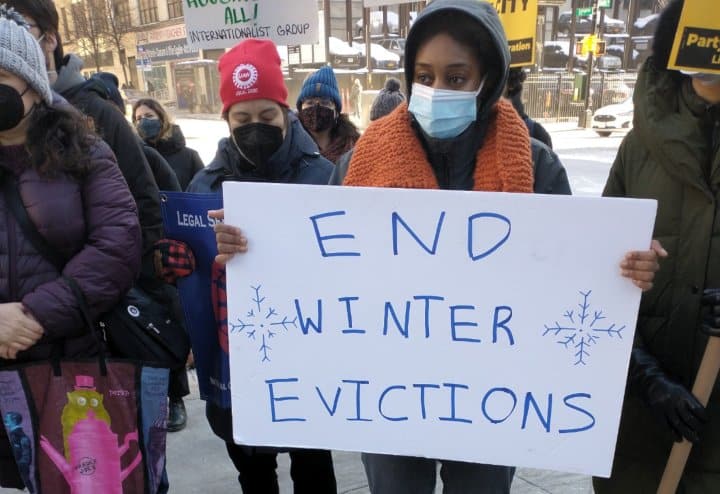