Many of them were part of the news conference Dec. 30 announcing the MLK March for Social Justice on the Dr. Martin Luther King Jr. holiday, Monday, Jan. 17. The enthusiasm felt from the organizations at the media event comes from this being the first time in over three decades that the MLK events will exclude the police and not disrespect the legacy of Dr. King.

In addition, Immigration and Customs Enforcement (ICE) and U.S. military organizations are not invited to have contingents or any representatives.

Many in South Central, where the MLK Parade occurs, see the recent killing of 14-year-old Valentina Orellana-Peralta, a recent immigrant from Chile, as yet another horrible reminder of the terror created by the police forces against the predominantly Black and Brown community. Her tragic death was caused by a stray bullet from a Los Angeles Police Department military assault weapon fired in a crowded store.

“We can’t let Dr. King’s message of social justice, against war and poverty, be corrupted by those who have shown no remorse and are dedicated to maintaining their murderous assault and war on the people of South Central. We cannot honor and enable them in a parade that is supposed to fight against injustice,” said Jefferson Azevedo of the Harvard Boulevard Block Club, the community block organization where the King Day Parade has begun year after year.

“We believe that we should have a voice in what goes on in our community,” said Maggie Vascassenno, another member of the block club. “I worry every time my son drives on these streets to school or work – what if he gets stopped and profiled by trigger-happy police all too willing to shoot young Black men? Imagine the insult of seeing those who’ve committed atrocities against us being lauded in a parade that is supposed to be about Dr. King.”

Ron Gochez of Unión del Barrio spoke about the need for Black and Brown people to come together to not allow police at the event, to honor Dr. King, keep the event a family-friendly and welcoming day for the community, and allow the community to shape the activities of the day.

The Harriet Tubman Center and the coalition were the first to file for the permit application last July. This Ad Hoc Coalition for the MLK March for Social Justice is also part of the national initiative by Dr. King’s family.

Martin Luther King III recently announced that this year is not to be a celebration, but part of the fight for social justice to demand the Biden administration not just condemn the voter suppression avalanche aimed at especially Black voters in words – but take real effective action. King III’s initiative, “Give Us the Ballot,” has endorsed this coalition’s march.

The coalition is now in the process of making sure the LAPD honors the permit application. 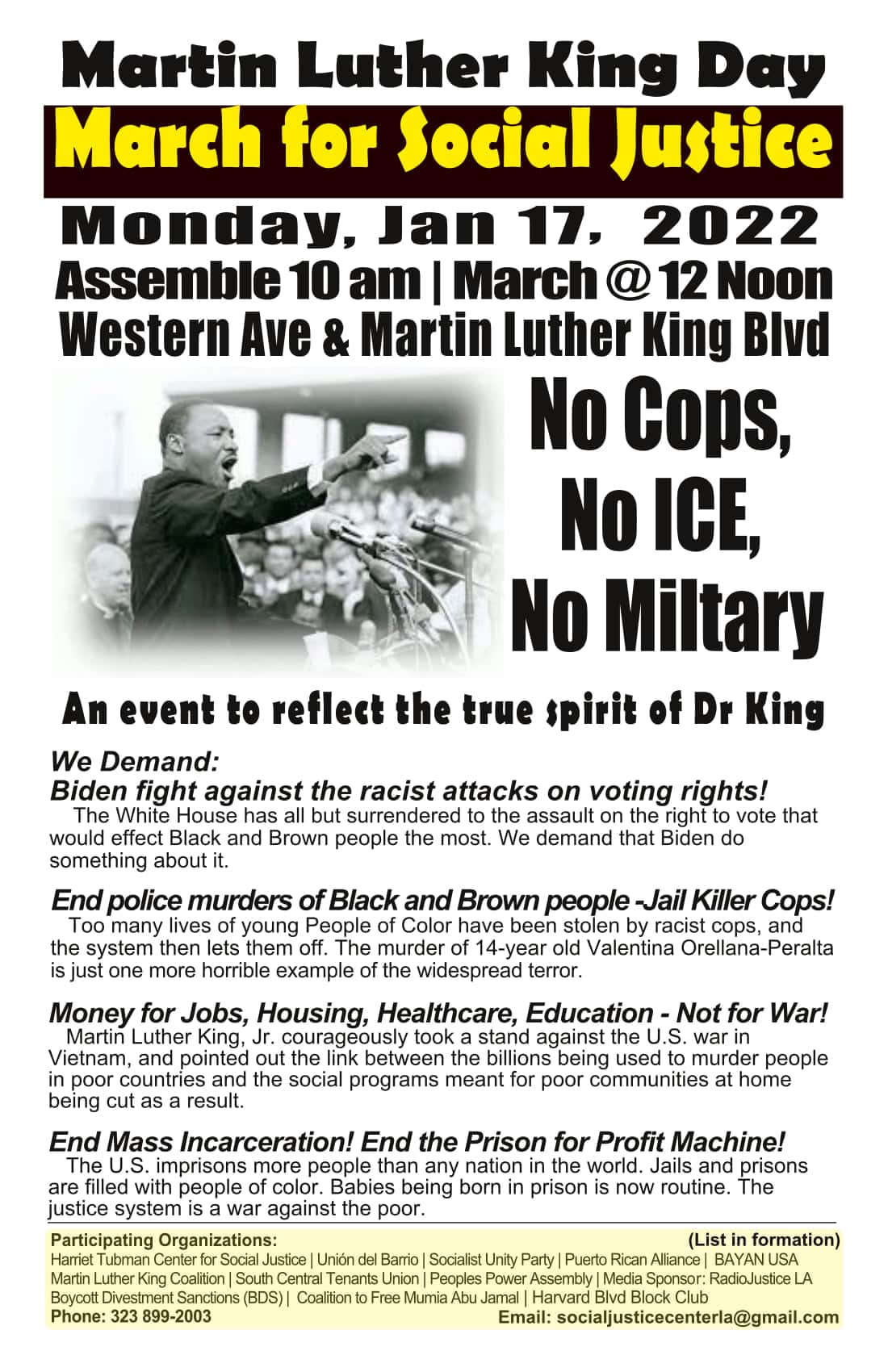