An important people’s victory has been won in the small but strategic eastern European country of Moldova. After six long years, a group of socialist and anti-fascist activists known as the Petrenko Group have finally been exonerated of trumped-up charges.

On Sept. 6, 2015, these activists and their comrades organized a militant but peaceful protest of thousands in Chisinau, the capital, against the dictatorship of capitalist oligarch Vlad Plahotniuc.

The Petrenko Group’s journey included police brutality on the streets and in the courtroom; months of imprisonment in harsh winter conditions in a literal 19th-century dungeon, followed by house arrest with electronic ankle bracelets; unconstitutional restrictions on their rights to travel and protest; and, in the case of former Member of Parliament Petrenko and the group’s original attorney, Ana Ursachi, threats to their lives and families that forced them to flee the country.

Unable to achieve any justice in Moldovan courts, the Petrenko Group took their case to the European Parliament and European Court of Human Rights (ECHR). On Sept. 14, 2021, the ECHR ruled in favor of the Petrenko Group, finding that their rights had been violated and ordering the Moldovan government to pay more than 67,500 euros in damages to the victims. 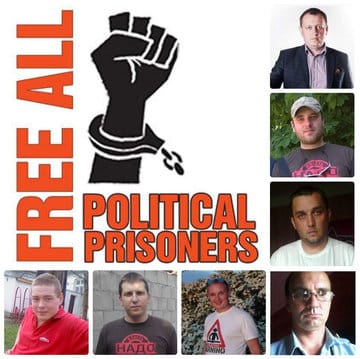 Throughout their long fight, the Petrenko Group always emphasized that their persecution was meant to intimidate others from speaking out against austerity, state repression and anti-communist measures.

Their supporters kept up a presence in the streets and at their court hearings. They organized on behalf of other political prisoners. They held news conferences and built international support.

In 2016, this writer visited Chisinau and attended a court hearing of the Petrenko Group. I saw first-hand the arbitrary and harsh treatment of the defendants and their attorneys by the judges and prosecutor — right down to forbidding a willing and otherwise unoccupied court translator from interpreting for a foreign observer. (As a resident of the U.S., I also immediately noticed how all the computer equipment in the courtroom sported stickers reading “provided by USAID.”)

Oligarch Vlad Plahotniuc was a big fish in a small pond. After piling up too many outrageous scandals for the comfort of his Western sponsors, the oligarch fled Moldova in 2019. He now resides in Turkey.

But while the top oligarch fled, Moldova’s capitalist oligarchy remained. And the persecution of the Petrenko group continued in Plahotniuc’s absence, through the state institutions loyal to him and his class — first under the government headed by social democratic President Igor Dodon, and then under current pro-Western President Maia Sandu.

After the charges were formally dropped, Petrenko Group members held a news conference Sept. 17 where they called for the exposure and removal of those who knowingly collaborated in the frame-up. Alexander Roshko read out the list of dozens of judges and prosecutors, police and prison officers, and high political officials.

Pavel Grigorchuk said that the money awarded by the ECHR as compensation should be paid by the judges “who carried out Plahotniuc’s decrees.”

Speaking by video link, Grigory Petrenko said: “The statement of the General Prosecutor’s Office is a delayed one. Of course, it’s better later than ever, but I’m sorry it took six years to understand that all the allegations in this case were fabricated.

“I hope that this case will be an impetus for the whole society to start a lustration [removal] procedure of all those who dealt with political prisoners in recent years, during the Plahotniuc regime. It is about many specific people, about prosecutors, executors, judges, people from Plahotniuc’s entourage. We would like this case to be continued as a civic lustration by society and to follow very concrete actions.